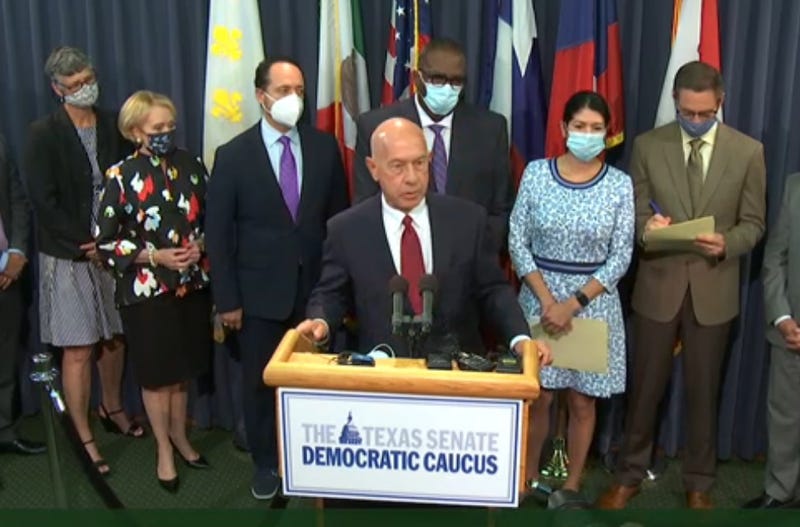 Democrats in the Texas State Senate say they're working to block an election security measure favored by Republicans as their colleagues in the Texas House remain in Washington, D.C. to prevent a quorum. Senate Bill 1 has already passed the Texas Senate but can't be brought up for a vote in the House while the Democratic members are out of the state.

"To break quorum as the House has, to go to Washington as they have done, is part of the legislative process. Those of us here on the floor last week fought as best as we could to represent our districts," said State Senator John Whitmire of Houston. "We fought and were effective on the Senate floor while our colleagues were fighting and talking to the national leadership."

Sen. Whitmire joined several other Democrats for a news conference in Austin to make an appeal to Republicans in the legislature and Governor Greg Abbott. Democrats are asking for good-faith negotiations on the bill.

"Governor Abbott, you haven't had one Democratic Senator in your office. You have spent more time with the Governor of Florida than you have with these honorable members of the Senate and the House," Sen. Whitmire said. "Threatening to arrest us is a non-starter. Welcome us into your office."

On the other side of the aisle, Republican Lieutenant Governor Dan Patrick is criticizing Democrats for spreading what he calls un-true claims about the Senate Bill 1 and House Bill 3.

"The 'fear factor' is that they're on the wrong message, and people of color in the state of Texas do not want to federalize our elections," Lt. Gov. Patrick said. He called on Democrats to return to the Texas House to pass important legislation there.

Texas Governor Greg Abbott was critical of Democrats during a news conference in Houston to sign a bill that toughens punishments for people who make or distribute fentanyl. He called for them to return to the state for a vote on the election security measures.

"There were compromises made on this bill before Democrats broke quorum and left again," Gov. Abbott said. "To go up to Washington, D.C. and to completely lie about what's going on and to misrepresent what the bill does causes them to lose credibility in the Capitol and makes it even more difficult for the members of the legislature to work with them because of the lies they have stoked. It's very inappropriate what the Democrats have done and it causes them to lose credibility."