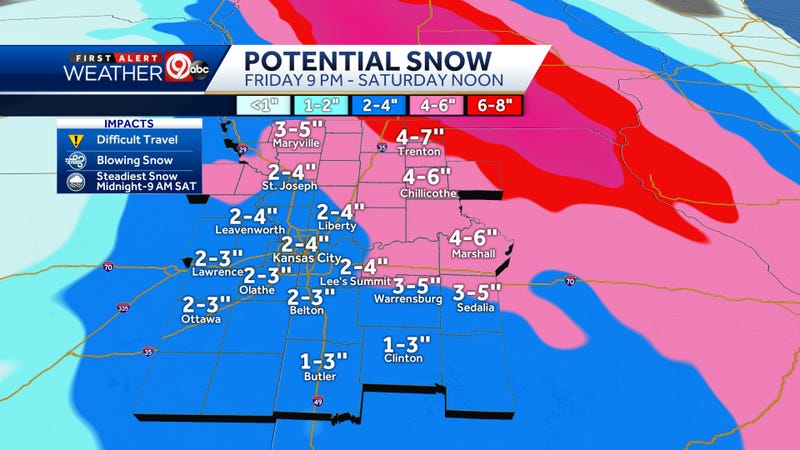 Kansas City, MO - Get ready to use the snow shovel this weekend.

Channel 9 Meteorologist Nick Bender says rain will move into the Kansas City Metro late friday night before changing over to all snow after Midnight.  Bender says 2-4” of snow will fall in the Metro with  more snow accumulations to the north and less to the south.

Bender does say this snow will be a wet snow and more difficult to shovel and clear.

⏲ Futurescan shows the changeover from rain to snow occurring this evening across northern Missouri, around midnight for Kansas City and a little later for communities south of the metro. The steadiest snow will fall between midnight and 9 am Saturday. #MOwx #KSwx @kmbc pic.twitter.com/gblfqz9G3W

Markl Johnson, a spokesperson for MoDOT, says the snow plow trucks are fueled up and ready for Friday, when a winter storm is expected to hit the metro. Drivers will start showing up around 9 or 10 p.m. MoDOT will decide later whether they will need to treat road surfaces.

Johnson says it's a good idea to pack an emergency kit if you're going out over the weekend. He adds drivers need to give the snow plows a lot of room to operate and he reminds drivers of SUVs and pickups, they need to slow down, too.

The snow ends by early afternoon on Saturday and it will be much colder for Chiefs Sunday,

If you have to hit the roads late Friday night into Saturday be prepared to handle the impending dangerous road conditions. #StaySafeKC pic.twitter.com/DQ1QemYG2O