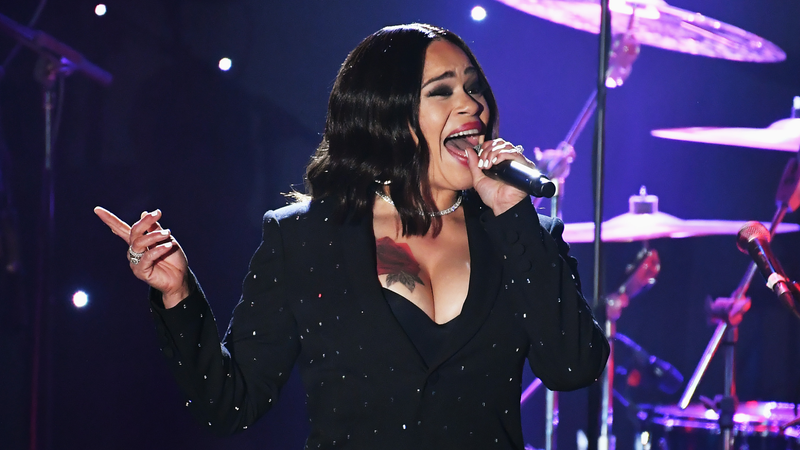 If you’re an avid watcher of The Masked Singer and happened to be rooting for the Skunk in the Group A finals, then safe to say you think the results of Wednesday’s elimination stink.

With only two contestants remaining in Group A, Skunk and Bull, went head-to-head.

Skunk, delivered a soulful rendition of Aretha Franklin's "I Never Loved a Man (The Way I Love You)” for her solo. And was then accompanied by Michael Bolton for a duet of "Ain't No Mountain High Enough" by Marvin Gaye and Tammi Terrell.

While Bull performed Paula Abdul's "Straight Up" on his own, and was later joined by Jesse McCartney (a Masked Singer alum and Season 3 runner-up, to sing The Script's "Breakeven (Falling to Pieces).”

Despite Skunk delivering two stellar performances, Bull went home with the win — a spot in the final, while Skunk was eliminated and revealed to be (drum roll please)… Faith Evans.

Which as it turns out two of the judges actually guessed correctly before the mask came off, due to two small (but Biggie) clues that occurred throughout episode.

One of the judges who guessed the Skunk’s identity right was Nicole Scherzinger. And the other was Robin Thicke, who used his powers of deduction to piece together the references to New York City in Skunk’s clue package and the “heartbreaking tale of not getting to say goodbye to somebody who passed in her life many years ago” (Hint: it’s her late husband Christopher Wallace, aka The Notorious B.I.G.)

The Masked Singer airs Wednesdays at 8/7c on Fox. Next week, the last of Group B, Banana Split and Queen of Hearts, will battle for the second slot in the season finale set to air on December 15.