He's led the NHL in goals nine times, and at age 36, he's off to a pretty good start on the quest for title No. 10. Even if he doesn't do that, however, Alex Ovechkin has broken into the five-headed Mount Rushmore of the game's greatest goal scorers, and that's quite an achievement in itself.

Ovi and the Capitals kicked off their 2021-22 season on Wednesday night against the Rangers, and it was he who did most of the damage, scoring twice in three shots on goal to become the NHL's fifth leading scorer of all time.

Most Goals Scored in NHL History

Considering Ovechkin was considered a game-time decision entering the season opener after suffering minor lower-body injury in the preseason finale, this performance was certainly nice to see.

He did all of his damage in the final period of play, when the Caps were already up by a significant 3-0 margin. Number 731 came during a power play after a shot deflected off a teammate.

Just under 10 minutes later, number 732 ripped through the net during a Rangers power play.

Ovi still has a long way to go before he catches up the Wayne Gretzky and his whopping 894 goals, but it's certainly within reach. Is it what he's fretting about, though, as he begins the first of a five-year, $47.5 million contract? Nope.

"I don't even think about it right now, to be honest. It's a long way away. And it's a hard way. Whatever happens, happens," he told ESPN. "You watch TV. You listen to the radio. You talk to your friends. Stuff comes up in conversations. But, realistically, it's kind of far away." 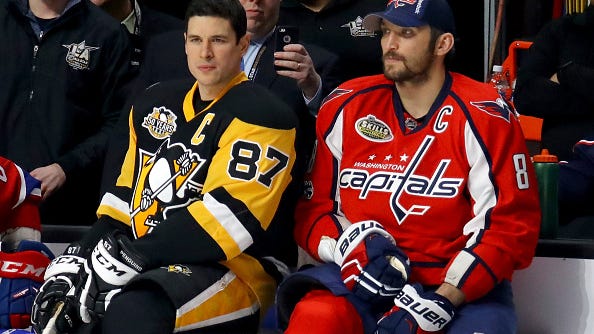 The 13 Richest NHL Players in the World, Ranked by Net Worth