The Philadelphia Phillies have struggled to find stability both at the shortstop position and the top of their order since trading franchise icon Jimmy Rollins to the Los Angeles Dodgers in December of 2014.

Seven-and-a-half years later, there appears to be increasing buzz that the Phillies could potentially be a player to sign Trea Turner away from the Dodgers this offseason, giving them both an elite shortstop and leadoff hitter.

Bob Nightengale of USA Today spoke with "several talent evaluators" who believe that the Phillies will ultimately sign Turner this upcoming offseason, when he's slated to become one of the winter's top free agents.

Earlier this month, Bryce Harper spoke glowingly of Turner in a conversation with Nightengale.

Harper and Turner, of course, were teammates with the Washington Nationals from 2015-2018. After Harper put together a monster series in Los Angeles in May, Turner simply said that "it feels like he's the best player in the world."

The Phillies will have an aging Didi Gregorius coming off the books after the 2022 season, and are likely to decline the $17 million club option that Jean Segura has for 2023 and instead take the $1 million buyout. Gregorius and Segura are making a combined $28.75 million in 2022.

FanSided's Robert Murray suggested last week that while he's not sure that Turner will get the 10 years that Corey Seager got from the Texas Rangers this past offseason, he believes that he'll seek to top the $32.5 million average annual value that Seager has in his deal.

Certainly, the Dodgers are going to make an attempt to retain Turner, but as Murray pointed out, Andrew Friedman and company probably do need to begin to earmark some money for Julio Urías (free agent after 2023) and Walker Buehler (free agent after 2024). The Dodgers would have to be seen as the favorites to retain Turner at this stage, but given that they've allowed both the aforementioned Seager and Manny Machado to depart in free agency in recent years, nothing can be ruled out.

Additionally, while money can persuade someone to play in a different region of this country, Nightengale and Jon Heyman of The New York Post have both suggested that Turner would prefer to play for a team on the East Coast. Turner is from Florida, which isn't particularly close to Philadelphia. With that said, the Phillies Spring Training home is in Clearwater, Florida, as opposed to the Dodgers, who make their Spring Training home in Glendale, Arizona. For what it's worth, the Phillies also play in Miami and Atlanta more frequently than the Dodgers.

It may be that president of baseball operations Dave Dombrowski chooses to spread the team's resources around this upcoming offseason, with the Phillies also having needs in center field, the starting rotation and the bullpen, among other areas.

But it's hard to deny the effect that Turner, set to turn 29 this week, would have on the Phillies if he was inserted into a lineup that already includes Harper, J.T. Realmuto, Kyle Schwarber, Rhys Hoskins and Nick Castellanos. 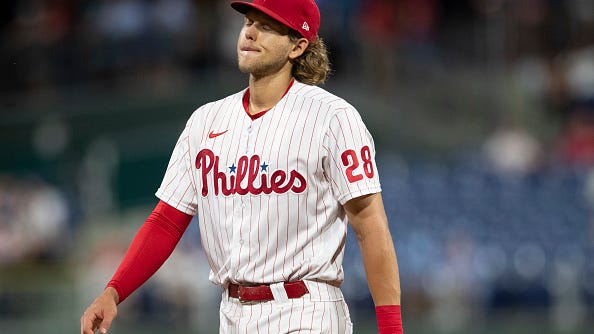