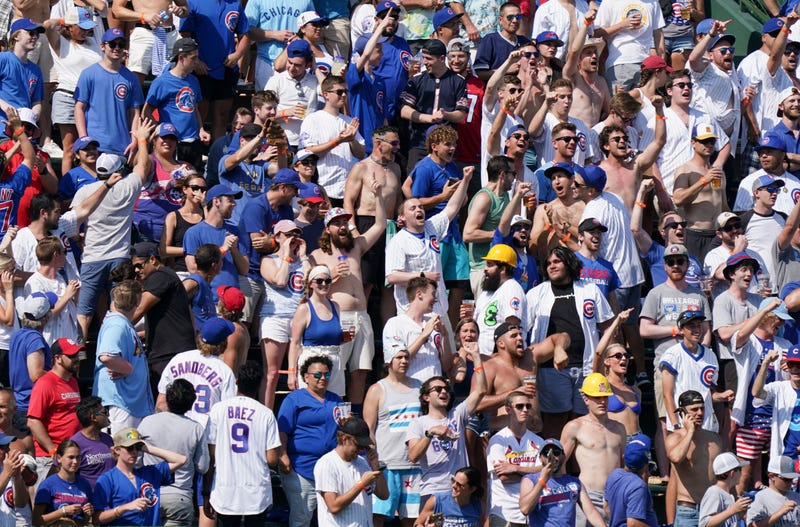 Last night’s game on the North Side wasn’t much of a contest, thanks to the Mets, who ended Thursday’s series opener almost as quickly as it began, taking control early en route to a lopsided 8-0 victory that had all the drama of an afternoon trip to the DMV (aka Hell). Predictably, fans began to lose interest, discovering other avenues—most of them alcohol-related—for entertainment.

The tried and true “beer snake” made an appearance during the latter innings, taking up several rows in the outfield cheap seats. Jake, credited as the architect of this spiraling cup creation, gave a compelling interview with intrepid SNY reporter Steve Gelbs, walking through his process while discussing what constitutes a successful beer snake.

“Basically, a snake starts in the sixth, seventh inning,” Jake, a seasoned vet in his chosen field of cup gathering, explained to Gelbs. “Everyone’s got a few beverages in. Someone stands up and goes, ‘Give me your cups!’ You see a snake form up in the beginning, everyone throws the cups. Now what is it, the eighth inning?”

“Basically the eighth, Steve,” Jake responded with the confidence of a man who contributed many of the empty cups. “It goes all the way up and that’s how it forms. Pretty simple.”

Jake, in the midst of his beer snake tutorial (which should be required viewing for anyone headed to Wrigley Field), gave a shout-out to his mom Kelly Johnson, as well as James, Ally and Jim, wherever they may be watching.

Drink a few, collect a couple cups, rinse, repeat and voila, you’ve got a beer snake wrapping halfway around the stadium. Jake and his outfield disciples seem to have this down to a science, perfecting a recent ballpark trend that is only getting bigger with serpentine works of art popping up everywhere from Wrigley to the Oakland Coliseum. If nothing else, beer snakes have the unique ability to make an unwatchable game more tolerable (Exhibit A: Thursday night), bringing together droves of likeminded strangers, most of whom have no idea the score or even which team is up to bat.