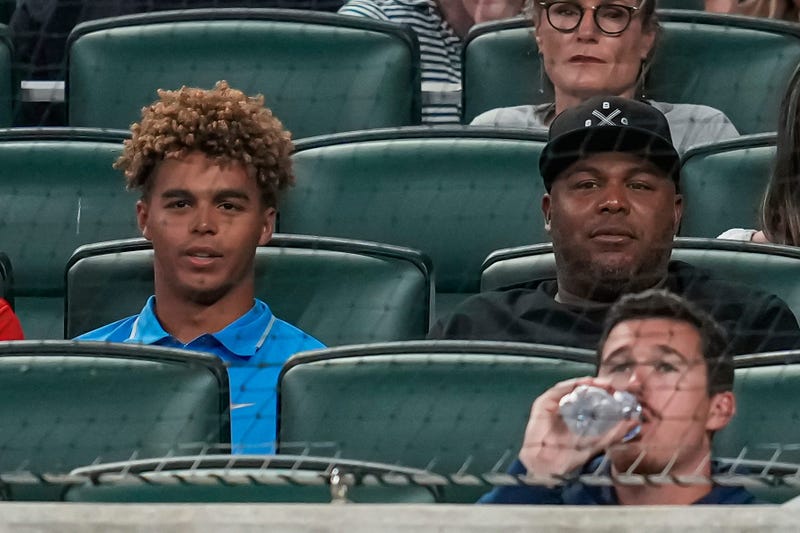 The 2022 MLB Draft is headlined by two players that may sound familiar. Druw Jones and Jackson Holliday are the sons of former MLB All-Star outfielders Andruw Jones and Matt Holliday. The two are expected to be drafted with the top few picks.

“(Druw Jones) is a serious upside play. He’s 6’4, he’s thin, he’s gonna fill out, but he’s already got some serious power. I’ve seen him flick his wrist and hit balls close to 400 feet now as a high schooler,” Bernhardt said (2:45 in player above).

Druw has a different build than his dad did, but he is still drawing the comparisons – and for good reason. Jones plays a silky-smooth center field and seems to get to everything while also throwing well, Bernhardt explained.

“I’ve gotten to see him on several occasions and every time I see him he does something to impress you. That’s not easy for young guys to kind of be up every day when they’re in the spotlight but he’s done a good job of that.

“It’s a really good mix of tools with projection on top of it,” Bernhardt said. “He’s produced pretty much everywhere he’s been.”

While Druw Jones is projected to go first overall, Jackson Holliday is right behind him as the second-best prospect in the class after a great spring.

“I saw him last fall and really liked him. Good actions at short, he’s grown up around the game so he’s got a high baseball IQ. He’s a left-handed hitting shortstop with a nice clean stroke, good bat to ball skills.”

Bernhardt may have seen him last fall, but Holliday has since put on about 15 or 20 pounds of muscle, he said, while also getting faster.

“Every time scouts went into see him he seemed to hit a home run, have a double, make some good plays at short… There’s some scouts that I trust that think he’s the best player in the draft at this point.”

Holliday was named Oklahoma's Gatorade Player of the Year after setting a national single-season record with 89 hits. He batted .685 with 17 home runs and 79 RBI as well.

While Jones and Holliday are the two most in the spotlight, Bernhardt has his eyes on Elijah Green, the son of former NFL tight end Eric Green.

If Green is available to the Texas Rangers with the third overall pick, they may be getting a steal.

“Elijah is still number one on my board,” Bernhardt said (8:20 in player above).

Bernhardt hasn’t been able to see Green as much as some major league teams, he admitted, but every time he saw him he did “something at the field that makes me say ‘Wow.’”

“I think he’s a really, really good baseball player with huge tools, a power-speed combination that we don’t see all the time, especially with that body (6’3”, 225 lbs)

“My opinion is that Elijah’s hit tool is better than people give him credit for,” Bernhardt said. “It’s such a quiet start but he accelerates the bat so quickly and goes from 0 to 100 in a heartbeat that I think that he’ll be able to figure it out pretty quickly.”

Former MLB player Lou Collier broke into the big leagues with the Pirates in 1997, and Pittsburgh has been connected to his son, third baseman Cam Collier.

“This is another guy I’m a fan of and that’ll be an interesting fit,” Bernhardt said (16:16 in player above). “Cam’s a left-handed hitting third baseman out of Georgia. He’s one of the youngest players in the draft this year” after reclassifying to graduate one year earlier and play at a junior college.

Bernhardt noted that Collier played at one of the best colleges in the country (Chipola Junior College) against players older than him, and handled himself well against even more experienced talent in the Cape Cod League. Bernhardt said that he couldn’t recall seeing a high school player in the Cape Code League, let alone a 17 year old holding his own.

“He’s got a very easy left-handed swing. The game seems to come easy to him. It’s not a violent swing. It’s not what jumps off the page as a ton of bat speed but man, he impacts the ball. He can drive it to all fields. He can hit balls out, certainly to the pull side.”

The 2022 MLB Draft is going to be filled with plenty of familiar names in the top several picks and there’s a good chance you’ll see a few of them in the majors in the near future.