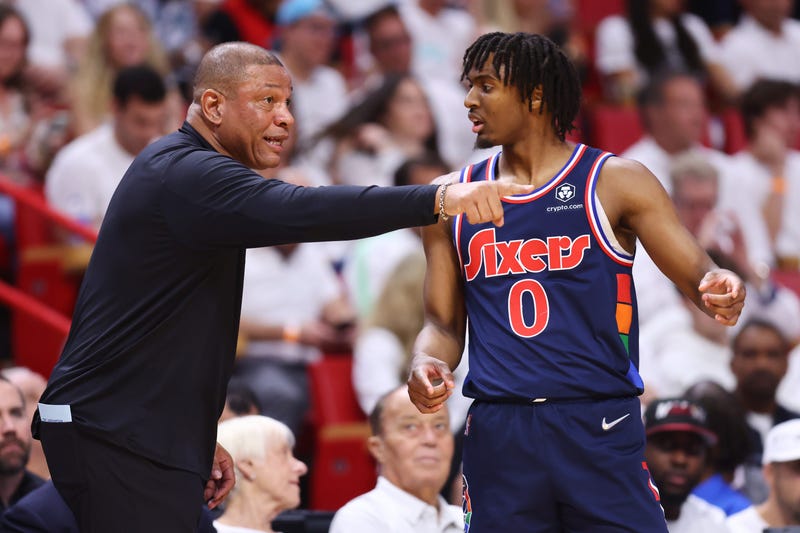 Even in a stacked Eastern Conference with Boston, Miami, Brooklyn (contingent on the returns of Kevin Durant and Kyrie Irving) and Milwaukee all posing significant threats, it would be foolish to count out the Sixers, who seem confident as ever heading into the upcoming 2022-23 season. Perennial MVP candidates Joel Embiid and James Harden always give them a chance to win, but what makes the Sixers really dangerous is the emergence of Tyrese Maxey, a rising star coming off a breakout postseason, where the 6’2” guard averaged 20.8 points per game on efficient 48.4-percent shooting. Nobody is more excited about Maxey’s potential than Doc Rivers, who considers him among the most talented players he’s ever coached.

“He asked Spencer, ‘What do you do on vacation?’ Spence was like, ‘You relax.’ And he’s like, ‘For how long? How many days?’” said Rivers. “Last week he’s back in L.A., working out. And the first thing he said was, ‘Vacation’s too long, Coach. Can’t do it that long.’ And I’m thinking, man, I love this guy.”

Maxey, a former five-star recruit who spent his lone collegiate season at the University of Kentucky, experienced plenty of growing pains early in his Sixers tenure. But even when his shots weren’t falling, Rivers could see Maxey’s drive and determination, traits that have quickly propelled the 21-year-old to stardom.

“His rookie year was up and down. You saw him, he struggled a lot, struggled with his shot. But you’ve been in the gym before with guys that never miss, but then didn’t make shots in the game. And some of those guys you’re like, ‘He’ll get it.’ And he was one. I said it all year, ‘This guy can shoot,’” said Rivers of Maxey’s development from year one to year two. “You just knew eventually it would click on, and it really has.”

Doc with some high praise on Tyrese Maxey 🙌