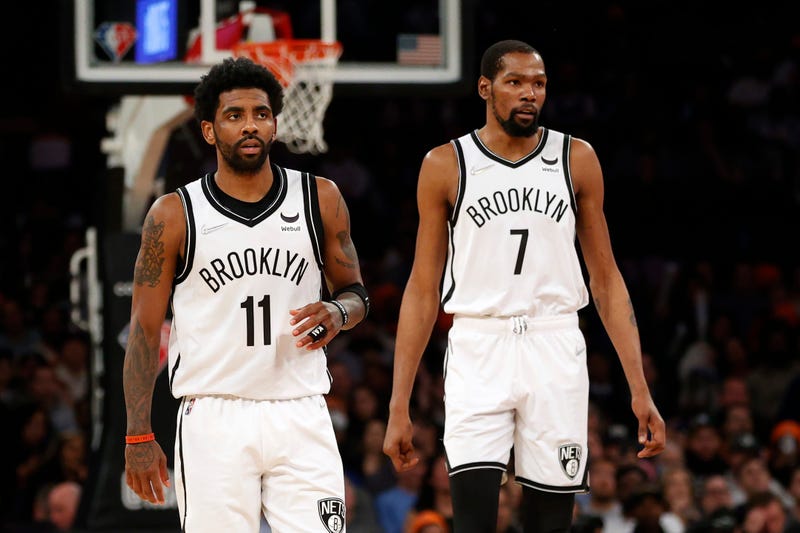 According to at least a couple prominent analysts, the ill-fated would-be juggernaut now owns a dubious distinction in the annals of league history.

Yahoo Sports columnist Vincent Goodwill says the Durant- and Kyrie Irving-led Brooklyn teams are the "biggest disappointment" ever to take the court, even surpassing the 2004 and 2013 Lakers teams that similarly flopped despite great expectations.

Meanwhile ESPN's Tim Legler had a similar take on "NBA Today," claiming these Nets will "go down as one of the most epic failures in the history of this league."

The Nets never forged any "connective tissue" under Durant and Irving, Goodwill writes, neither among themselves nor with Nets fans.

All of Durant, Irving and the departed James Harden share the blame, per Goodwill:

"It's a rare case where no one party is a victim, but no single party is solely to blame -- almost all have a hand in the state of affairs to date. ...

"It ended up being every man for himself, a true Battle Royale for the exits, at various times for various reasons."

While the doomed experiment will go down as an all-time failure, according to Goodwill, the Nets had little choice but to turn over the keys to the two superstars when they chose to come to Brooklyn in 2019:

"The Nets had to say yes to Durant and Irving, they'd be fools not to. They had no identity on the NBA's cultural map, in the shadow of the back-page grabbing Knicks. But it appears they didn't set actual parameters, as if they were so grateful to be graced by today's stars they didn't bother to have a level of structure to be followed, let alone respected."

It's "no coincidence," he adds, that Durant's reported preferred trade destinations -- the Heat and Suns -- "represent some kind of stability."

But Durant bears at least some of the responsibility for the mess he's leaving behind, per Goodwill, even if he's justified in wanting out of a dysfunctional situation that was ultimately blown up by Irving.

"He'll have to explain this in some forum or another, because even his next destination won't reveal his wants as much as escaping the burning house in Brooklyn, as his buddy Irving holds a bottle of kerosene behind his back."