That's partly because of tighter virus restrictions, but also because, like tens of millions of Americans, he'll be glued to his TV for the NFL Divisional Playoffs.

The longtime play-by-play man will then venture out to call the Bills-Chiefs game at Arrowhead Stadium on Sunday night, arguably the most anticipated of the weekend's four contests.

For Nantz, who joined CBS Sports Radio's Zach Gelb Show this week to discuss the big weekend, the showdown of two high-powered offenses teases yet another unforgettable game in a career filled with them -- including eight Super Bowl broadcasts.

But in fact, according to Nantz, none of those Super Bowls ranks as his favorite. That distinction would belong to another famous game held at Arrowhead -- the 2018 AFC Championship Game between the Chiefs and Patriots.

“That was one of the best games I’ve ever seen," Nantz said of the 37-31 overtime thriller won by the Patriots. "It was 14-nothing New England at halftime, and Kansas City had done nothing offensively, and they came back and sent this game into overtime at 31-all. Brady took them right down the field. That was one of my favorite games of all time." 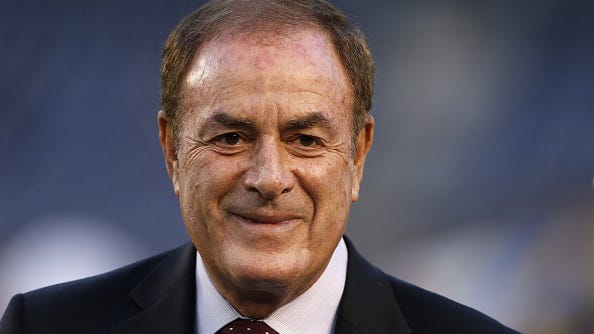 Nantz, who as CBS' lead NFL broadcaster had a front-row seat to Brady's meteoric rise, cited a separate Brady-involved, non-Super Bowl classic as another one that stands out -- the epic Patriots-Colts 2006 AFC title game.

"I’ve had eight Super Bowl broadcasts," Nantz said. "I’ve haven’t had a Super Bowl that would match the [Patriots-Chiefs] game, nor match Brady and Manning in 2006.”

While Super Bowls can be hit or miss in terms of competitiveness, the odds of a thriller or two this weekend are obviously a lot higher with four games on the docket. With frigid temperatures and post-holiday doldrums setting in for many, a weekend of potentially high-caliber football is just the right tonic.

Nantz is similarly looking forward to some hearty K.C. cuisine on what he called his "favorite weekend" of the long football season.

“This is my favorite weekend of the year. You’ve got four games. I won’t leave my room in Kansas City all day Saturday. … There is a very good steakhouse right across the street, and we are back to super strict protocols -- we’re not allowed to leave our room. I’m going to go more on the medium side, only because when people do takeout steak, traditionally it’s undercooked. Sautéed onions on the side, and a salad. I’m going to have a crab cocktail or shrimp cocktail, and be a happy guy.”

Kickoff at Arrowhead Stadium was set for 6:35 p.m. ET on Sunday. Nantz was scheduled to call the game alongside color analyst Tony Romo, with Tracy Wolfson and Jay Feely reporting from the sidelines.