The temperature dipped into the 40s for the first time this past week which officially means that fall is here. Pumpkin Spice weather. Jacket weather. FOOTBALL weather.

And as the temperature falls, we’re starting to get a better read on the NFL and let me tell you, for a lot of fan bases it’s going to get chilly awfully fast.

Looking at you, Chicago.

Here are my five big takeaways of the first week of Fall. 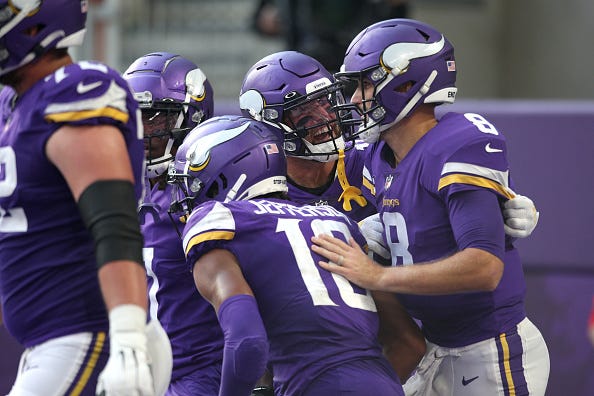 The Vikings Are Consistently Inconsistent

The Minnesota Vikings are a gambler’s nightmare. Literally the most inconsistent team in the NFC and it’s really not even close. On the road against the Bengals, driving for the win? Dalvin Cook fumbles and they lose. Last second kick against the high flying Cardinals? OF COURSE they miss. It’s what Minnesota kickers do.

So when Dalvin Cook got scratched for a sprained ankle with Russ and the Seahawks in town? Everyone and their mother faded the Vikes, and of course, backup running back Alexander Mattison torched Seattle for 112 yards and Kirk Cousins had a damn near perfect game in an absolute rout. Seattle ran out to a 17-7 lead and then the Vikings held one of the most potent offenses scoreless for the next 41:12. Seattle will have to look for tire marks on their defense they got run over so often. It was ugly, and it was not fun, and it ruined a parlay for me, because that’s what the Minnesota Vikings do best. 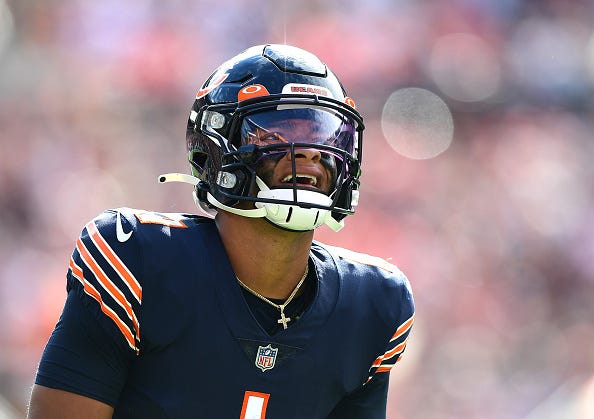 Chicago Has Still Not Found Its QB of the Future

The worst offensive performance of the week (New York Jets not withstanding, as they’ve been ruled ineligible for having won this award too often) was the Chicago Bears. Cleveland just destroyed Chicago on both sides of the ball. Myles Garrett had six tackles (four of them for losses) and 4.5 sacks. He literally unrolled a sleeping bag in the Bears backfield he was camping out there so often. The Bears defense, as they so often do, kept this game moderately interesting, but with such an offensive offense the outcome was never in doubt.

I want to like Justin Fields, even if I wrote last week he’s about as dangerous as a baby lamb. I want to believe he’s going to be a quality starter in the NFL. But here’s the problem. He’s just a little bit undersized, he’s just a little bit inaccurate, and he’s just a little bit too slow. A quarterback can get away with any one of those three things if the other two aren’t issues. I don’t know of any decent quarterbacks checking all three of those boxes. After one game Justin Fields has done the impossible: he got people asking “when is Andy Dalton coming back,” which are words that have never been uttered before in the history of the English language. 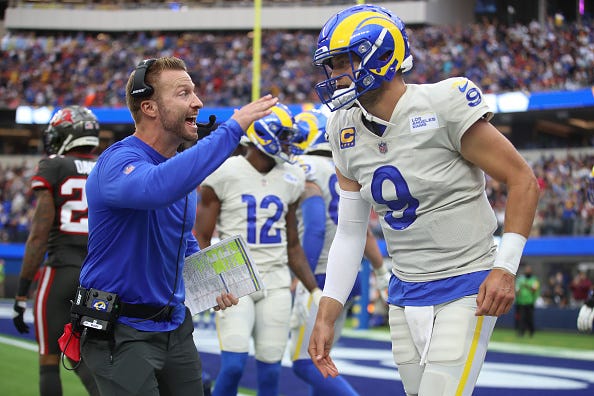 So far, Sean McVay and Matthew Stafford have been tremendous together. Photo credit (Katelyn Mulcahy/Getty Images)

The Rams Are the Best Team in the NFC West

Pretty much everyone saw the Rams and Bucs and if you don’t think Sean McVay is the happiest he’s ever been as a head coach you weren’t watching. Matthew Stafford is the toy McVay has always dreamed about. What’s the difference between him and Jared Goff? Winning and losing a Super Bowl. Goff can keep you in games if you have a world class defense, and if he doesn’t, he’ll be the king of garbage points and backdoor covers. But with Stafford, the Rams just dominated the defending Super Bowl champion and the greatest QB of all time. There’s a reason that McVay was jumping around like a kid opening a PS5 on Christmas. He knows what he has. He was asked at halftime if he’d ever been this excited about a game before and he could barely speak he was smiling so hard.

The Rams are good on offense and defense and if they stay healthy they’re the best team in the best division in football. 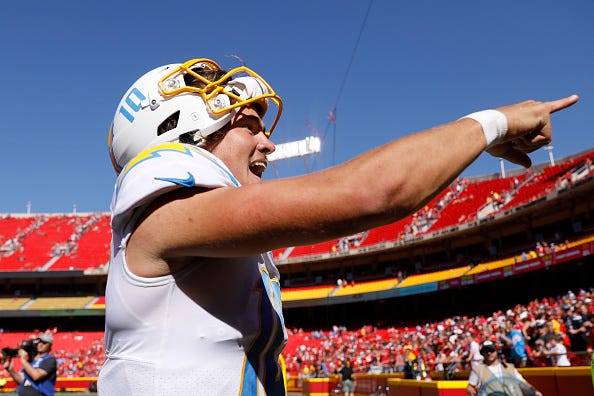 Justin Herbert is a Top 10 QB and Getting Better

Justin Herbert has stones as hard as diamonds and this Chargers team is going to be brutal out the rest of the year. If they didn’t have illegal shifts this team might be unbeatable, and once they figure that out? Look out. This team should be 3-0 and might be the only team all year to hold Dak and the Cowboys under 21 points. They have a brutal month ahead of them but three of those games are at home (Raiders, Browns, and Patriots) offset by a visit to Baltimore. I wouldn’t be shocked if this team was 6-2 at midseason.

And it’s not just the offense. Now that Derwin James is back, the defense is LEGIT. They had Pat Mahomes at the end of the game looking like someone stole his teddy bear. I mean he was legit SAD. It certainly wasn’t his fault they lost. To paraphrase that sage NFL prophet Giselle, “you can’t throw the ball and catch it at the same time.” But that doesn’t change the bottom line: the Chiefs are in last place in their division, and their defense doesn’t look good enough to win a Super Bowl. Neither will San Diego, but they’re going to be a royal pain in the ass to a lot of teams who think they’re contenders. 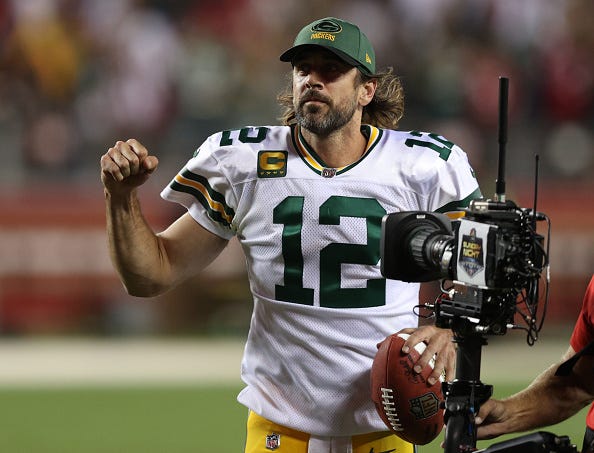 You didn’t think this was a revenge game? Aaron Rodgers coming back to the Bay where he not only grew up and played college ball but has expressed an interest in continuing his NFL career once he escapes the evil clutches of Matt LaFleur? You don’t think he felt disrespected rolling into his own backyard as a +140 dog? GTFO

And although the zebras did their best to keep San Francisco in this game, Rodgers did what Rodgers almost always does all game: torch good defenses. But damn if the 49ers aren’t gritty and George Kittle is almost impossible to tackle. They tried to steal this game, but they left 37 seconds on the clock which is just too much time for Aaron Rodgers. Just like that, the Packers win 30-28 and Rodgers gets another historic Sunday night win in front of all of America.

Fall is football weather and when we finally get our first freeze we’ll know a lot more about how this season is going to shake out.

That’s just a few of my favorite storylines for the week. Can’t wait to do it again next Monday!