As we approach the halfway point of the 2021 NFL season, we've decided to refresh our countdown of the best quarterbacks in the league -- or at least the top 10.

Before we get to our countdown, here are a few notes of what went into creating this list:

- While this list took into account what's happened to this point in the season, 2021's first six weeks were hardly the only thing considered here. The idea is to take what we've seen so far in 2021 and prior to that to make an accurate assessment of what's to come.

- As Deshaun Watson's legal situation continues to play out, the 26-year-old was not considered for this list, just as he wasn't before the year. Just in terms of his talent, he's certainly deserving of being in the top 10. But we don't know when Watson will play next, or who it will be for.

- Russell Wilson -- ranked at No. 4 on our preseason countdown -- is currently out indefinitely after having surgery on his right middle finger. It will be interesting to see if the seven-time Pro Bowler is still playing for the Seattle Seahawks the next time we update this list.

With all that acknowledged, here are the top 10 quarterbacks in the NFL right now: 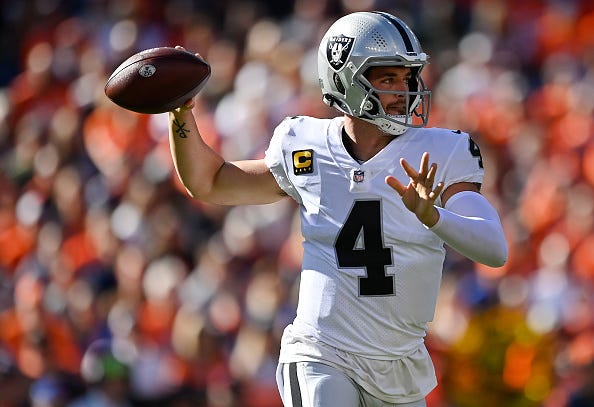 Derek Carr is having a tremendous season for the Raiders. Photo credit (Dustin Bradford/Getty Images)

Carr had built an excellent rapport with Jon Gruden before his resignation, but was equally impressive in his first game with Greg Olson calling plays this past Sunday. For virtually all of Gruden's tenure, it felt like a matter of when they moved on from Carr, not if. As it turned out, Carr outlived Gruden in the Raiders organization, and there's no reason to believe that the 30-year-old couldn't be the organization's quarterback for the better part of the next decade. 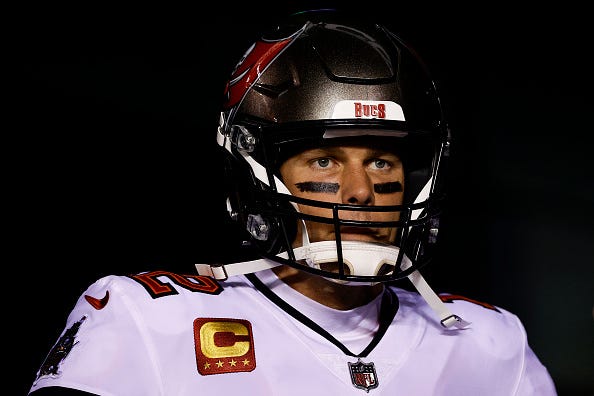 At the time of publication, Brady -- in his age-44 season -- leads the NFL in completions, pass attempts, passing yards and yards per game. His arm strength has shown no signs of declining, as it did with other legends like Drew Brees and Peyton Manning much earlier. At this point, we're not going to bet against him still being on this list in five years. 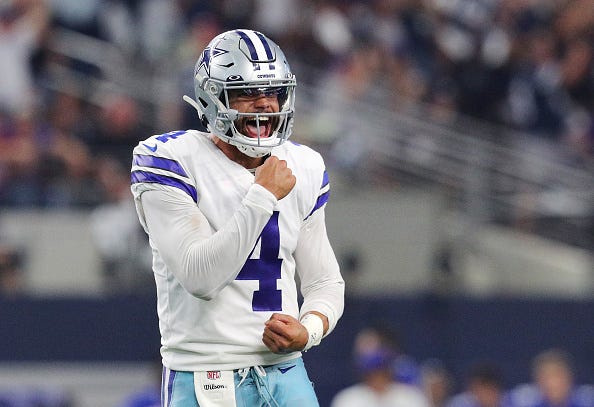 Dak Prescott has had a strong start to 2021. Photo credit (Richard Rodriguez/Getty Images)

The way Prescott has started the season, you'd hardly know that the 28-year-old is just over a year removed from a devastating ankle injury. In an offense loaded with skill-position talent, Prescott has 16 touchdowns to just four interceptions through his first six games of 2021. He's going to coast to the NFL's Comeback Player of the Year Award, and could very well factor into the MVP race. 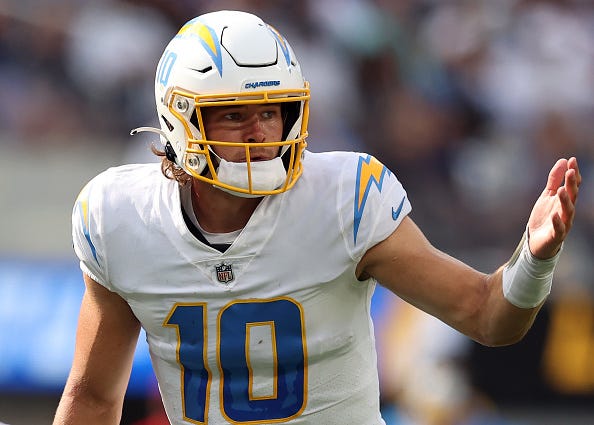 For as impressive as Joe Burrow has been, if you could go back and re-do the 2020 NFL Draft, not only would Herbert be taken above Tua Tagovailoa, but he may very well be the top overall pick. There's not a throw on the field that Herbert can't make, and he's seemingly helped the Chargers to move past a years-long culture of consistently losing games later in the fourth quarter. 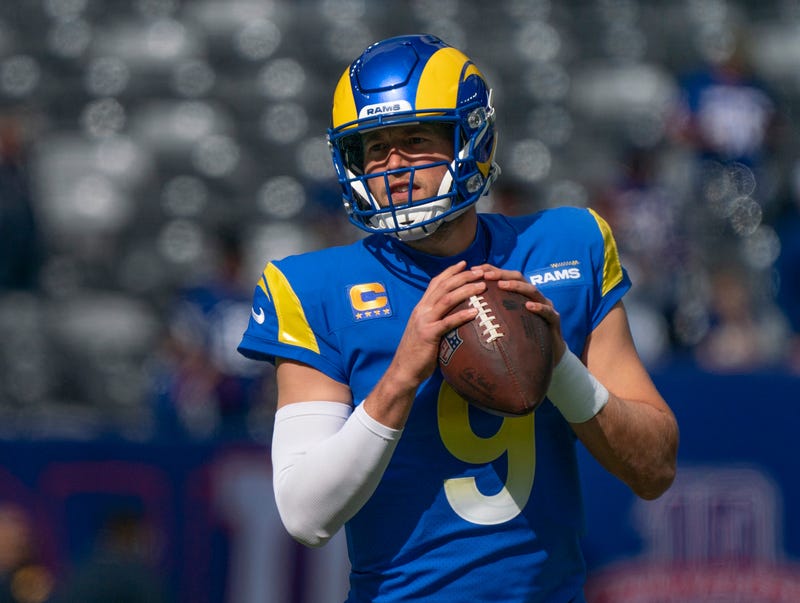 Matthew Stafford has excelled in his first season with the Rams. Photo credit (Robert Deutsch/USA Today)

No one has ever denied the dysfunction of the Detroit Lions organization, but the first six games of Stafford in another uniform -- with an elite head coach -- have perhaps added to the lore. Stafford already has tremendous chemistry with Cooper Kupp and is on pace to throw for over 5,200 yards. Given that MVP is a narrative-based award, it won't be hard to make a case for Stafford if the Rams continue to have success. 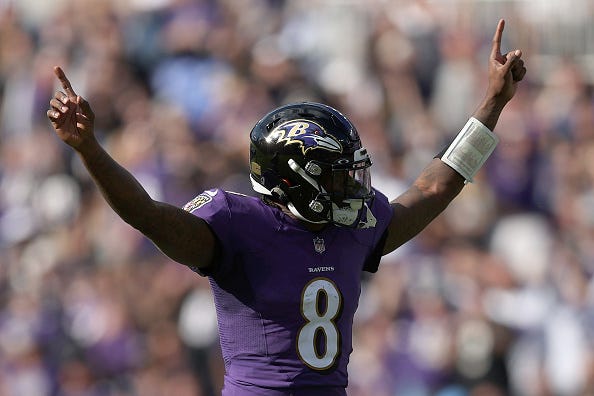 In the week's leading up to the regular season, virtually the Ravens entire depth chart at running back suffered season-ending injuries. And yet, the show has gone on -- without a true No. 1 wide receiver -- because of how special Jackson is. The former MVP is on pace to rush for over 1,000 yards for the third consecutive season. 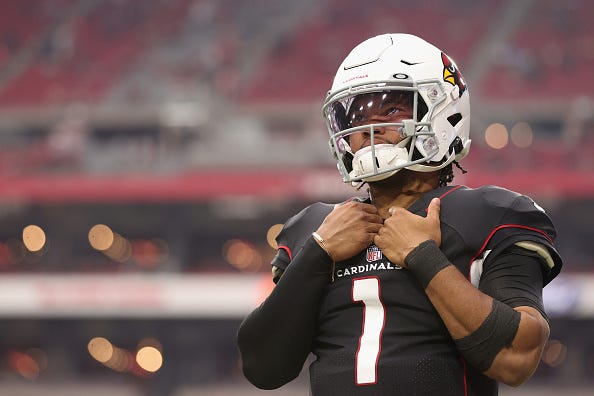 After the first six weeks of the season, Murray is almost certainly the leader in the clubhouse for MVP. He leads the NFL in completion percentage (73.8%), has thrown for 14 touchdowns and added another three on the ground. The Cardinals are 6-0 and look like a Super Bowl contender. 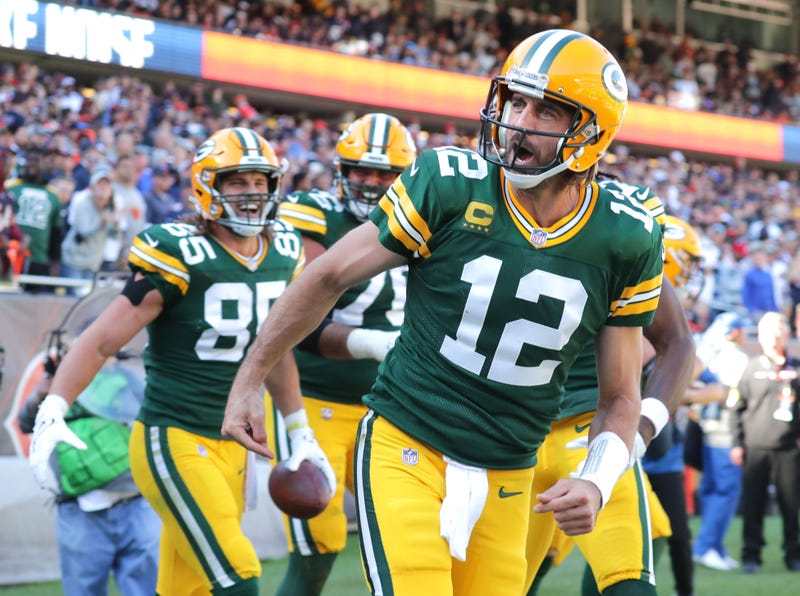 Since a disastrous season-opening loss to the New Orleans Saints, Rodgers has tossed 12 touchdowns to just one interception for the Packers. The three-time NFL MVP is going to turn 38 in December, and looks like he could play for at least five more seasons. Two-thirds of the league would be wise to place a call to the Packers next offseason if they do indeed shop the future Hall of Famer. 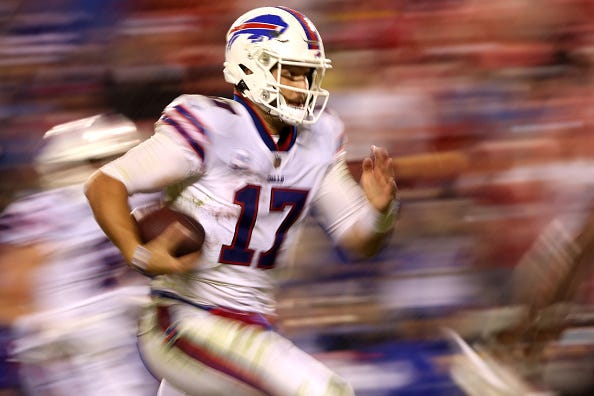 Josh Allen has emerged as one of the game's elite quarterbacks. Photo credit (Jamie Squire/Getty Images)

We're ready to say it: Allen is one of the most physically-gifted quarterbacks that the NFL has seen. That doesn't necessarily mean he'll eventually go down as one of the all-time greats, but the 25-year-old has that type of potential. With all due respect to Patrick Mahomes and Aaron Rodgers, Allen may very well have the best arm in the sport. He's also an excellent runner, one that's quick but big enough to scamper with some power. We may be higher on Allen than some, but after finishing second in NFL MVP voting in 2020, he looks determined to win the award in 2021. 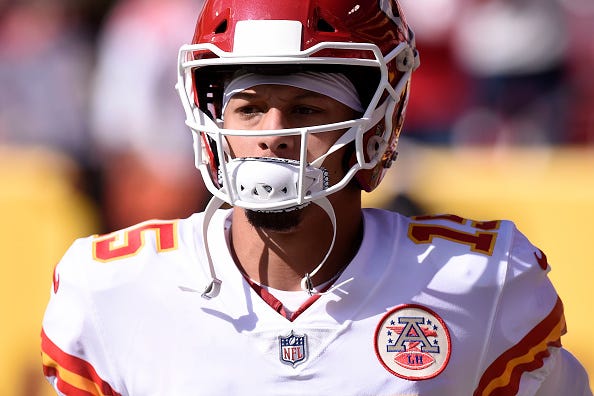 Many are eager to unseat Mahomes, even as he leads the NFL with 18 touchdown passes and has to overcome one of the league's worst defensive units on a weekly basis. It's possible that the Chiefs window of dominance has closed, but Mahomes' is just getting started. He does have eight interceptions already, but at least two of those can be attributed to tip drills created by Tyreek Hill. Mahomes is one of the most talented players to ever play the quarterback position, and a relatively slow start shouldn't bump him from the top spot.