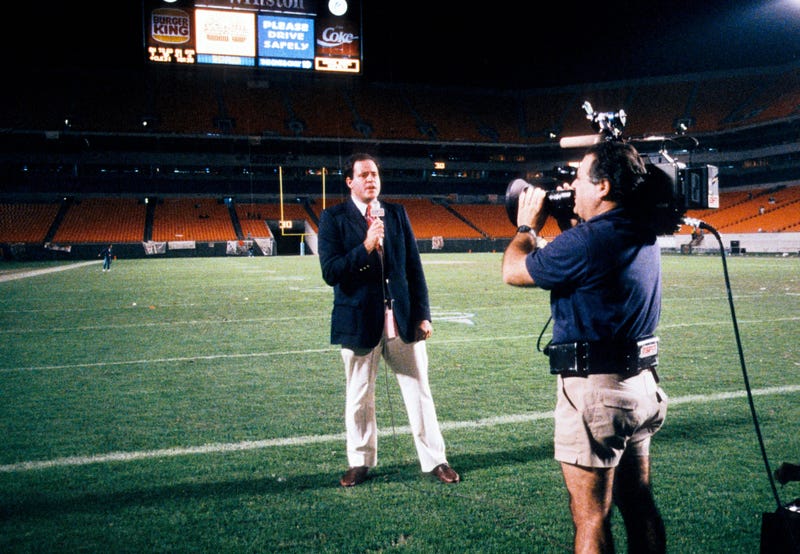 Boomer, as many call him, was one of ESPN’s first broadcasters and he’s still there over 40 years later. He made his start on “SportsCenter” and has since hosted a variety of shows, namely “Sunday NFL Countdown” and “NFL Primetime,” among others. Berman has also been the voice of the Home Run Derby.

Berman was Kenny Mayne’s guest on the first episode of Audacy's Hey Mayne podcast. Boomer took us back back back to the early days of ESPN.

“I had been on TV all of three months, which was pretty good experience for ESPN at that time,” Berman laughed, saying that they wouldn’t have hired him off of that if they had been on the air for longer.

“I had the Ron Burgandy look. You remember some of the pictures. The late ‘70s mustache and hair. I wish I put some of that in a pillowcase or something.”

This looks like the disguise Chris Berman would wear if he ever became a fugitive from justice. pic.twitter.com/4VA7EXRKr1

Berman went into the ESPN studio to observe on October 1st, 1979, and the next day he was on the air. From there, he was one of the central figures in the growth of not just ESPN, but sports television as a whole.

“We were Lewis and Clark,” Berman said (08:45 in player above). “There were seven of us original late ‘79 early ‘80s … we were Mercury Astronauts, that’s a better – we went up but we sure as hell didn’t know when or how we were coming down. We just hoped to hit the ocean, to date ourselves.

“(Walter Cronkite) did a half hour for all the news in the world, and we all sat there,” he continued. “Well we’re doing a half hour of sports, like, you guys got enough to do?”

Back in the early days of ESPN, and even after it was relatively established, it was rare for most teams to be readily available on TV. Outside of the major markets, namely New York, the games were rarely seen.

Berman and the rest of the early ESPN anchors were pioneers in the field. There was very little out there to go off of, but luckily Berman didn’t need any examples. He was just himself.

“I don’t know if anyone ever said ‘this is how you do it,’” Berman said. “This is me. I’m not so smart to say ‘this is how I’m doing highlights.’ Look, we all were ourselves on TV and certainly if you’re on every night you better be or they’re gonna see through that. If you’re on once a week you could change your voice; not on every night, they see through that. So if your self isn’t good enough, then you’re not good enough.”