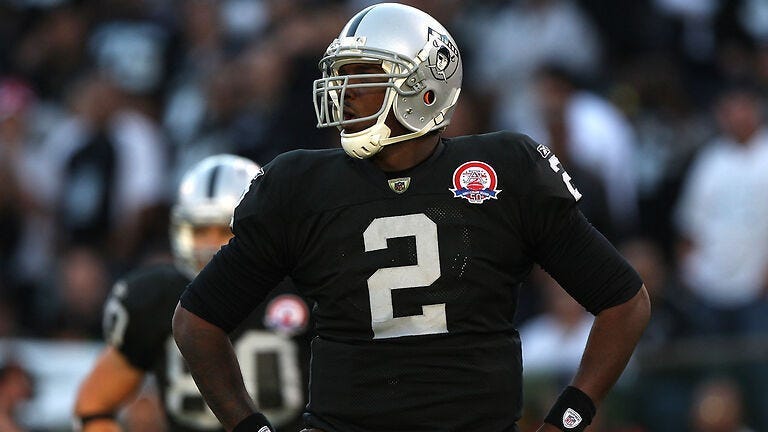 JaMarcus Russell often is viewed as one of, if not the biggest busts in NFL history.

And while he’s on a redemption tour of sorts right now trying to tell his side of the story, one Raiders exec who worked with him doesn’t want to hear it.

Russell made waves last month with his Players’ Tribune story that called out the Oakland Raiders for how they treated him during his ultimately ill-fated NFL career. He then went on “The Pivot Podcast” and reiterated much of it, while also claiming that the Raiders dealt him a tough hand with respect to the players he was surrounded with.

Some of those comments apparently rankled Mike Lombardi, who was the Senior Personnel Executive in Oakland at the time.

“I listened to three minutes of JaMarcus Russell try to make an excuse for where he is in life,” Lombardi said on his podcast “The GM Shuffle”. “I mean seriously, have some accountability big fella, like come on. I had to turn it off, I’m like 'I’m not sitting here and listening to this dude pontificate about why he had the greatest opportunity and he failed to do anything about it.'

“For the record, I want to be on record: I did not draft him. I wasn’t in the room. I know everybody wants to blame me for it, but that’s the fact.”

In fairness, Russell did take accountability for his missteps in both the podcast appearance and the Players’ Tribune piece. But this ultimately is the crux of the Russell discourse: how much of Russell’s failures were the product of his own undoing versus being the Raiders putting him in an awful situation?

Russell has his stance on the matter. Clearly, so too do others.