Major League Baseball commissioner Rob Manfred says that he hears the complaints that many fans and even players have voiced about blackouts being one of the sport's biggest issues, and he agrees.

In an in-depth interview with ESPN's Don Van Natta Jr., Manfred spoke openly about the issue of blackouts:

Many fans also complain that too many networks now broadcast MLB games, many behind paywalls. Fans say games are difficult to find and access, and blackout rules remain an irritant. "Our No. 1 business priority right now is reach," Manfred says. The topic was a main discussion at an owners meeting in June. "Believe me," he says, "we hate blackouts as much as fans do." Manfred notes that the blackout clauses are written into broadcast deals -- which he has overseen -- but he says it's now a "top priority" for MLB to phase them out.

Should you be able to watch all 30 teams in the league if you have an MLB.TV subscription? Of course. But then many fans would cancel their cable subscriptions, which they only have at this point to watch games. So who knows if that will ever change.

Additionally, MLB has added a game each Sunday morning on Peacock, NBC's streaming service. From here, having a weekly game on a streaming service isn't necessarily a bad thing. You're meeting some younger viewers who have cancelled expensive cable subscriptions where they are at. The problem is to watch the Sunday Peacock game, you need a subscription to the premium version of the app. The subscription is $4.99 for a month, which is hardly an outrageous amount. But if times are tough -- which they are -- you're going to lose a bunch of viewers who don't want to pay $4.99 to watch one game, especially if they believe it will be a difficult process to later cancel the subscription.

Baseball not being accessible to fans who don't have a cable subscription is a major problem. Whether there's a way to make it more accessible that's the league determines will be profitable remains to be seen. 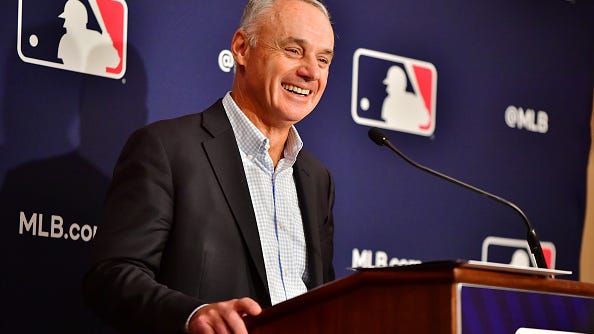 Rob Manfred on future of MLB: 'I would love to get to 32 teams'