The Jack Eichel era of Buffalo Sabres hockey is now officially over.

The Buffalo Sabres have acquired forwards Peyton Krebs and Alex Tuch, a top-10 protected 2022 first-round pick, and a 2023 second-round pick in exchange for forward Jack Eichel and a 2023 third-round pick. pic.twitter.com/ALrBSvGc3z

It was reported early Thursday morning that the Sabres and Golden Knights worked into the overnight hours to finalize a deal. The news of the trade was first reported by Andrew Peters.

Draft pick info from the @GoldenKnights on Eichel trade. pic.twitter.com/jsxmEAK6nO

The Sabres trade Eichel to the Golden Knights after months of tension between the 25-year-old and the organization.

Back in March, Eichel suffered a herniated disk in a game against the New York Islanders that eventually led to him missing the remainder of the 2020-21 season. In 21 games played with the Sabres last year, Eichel scored two goals and registered 16 assists for 18 points.

At the conclusion of the season, Eichel addressed the media during his end-of-season conference call and openly discussed his frustrations with the Sabres regarding his recovery process. Eichel said there was a "disconnect" between himself and the organization over the handling of the herniated disk in his neck.

That's where the "disconnect" started to escalate and eventually explode.

Eichel has been a proponent of an artificial disk replacement (ADR) surgery as part of his recovery from the herniated disk in his neck. However, the Sabres were recommending Eichel to undergo an anterior cervical discectomy and fusion (ACDF) procedure. Part of the reasoning behind the Sabres' decision was an ADR procedure has never been performed on a player at the National Hockey League level. 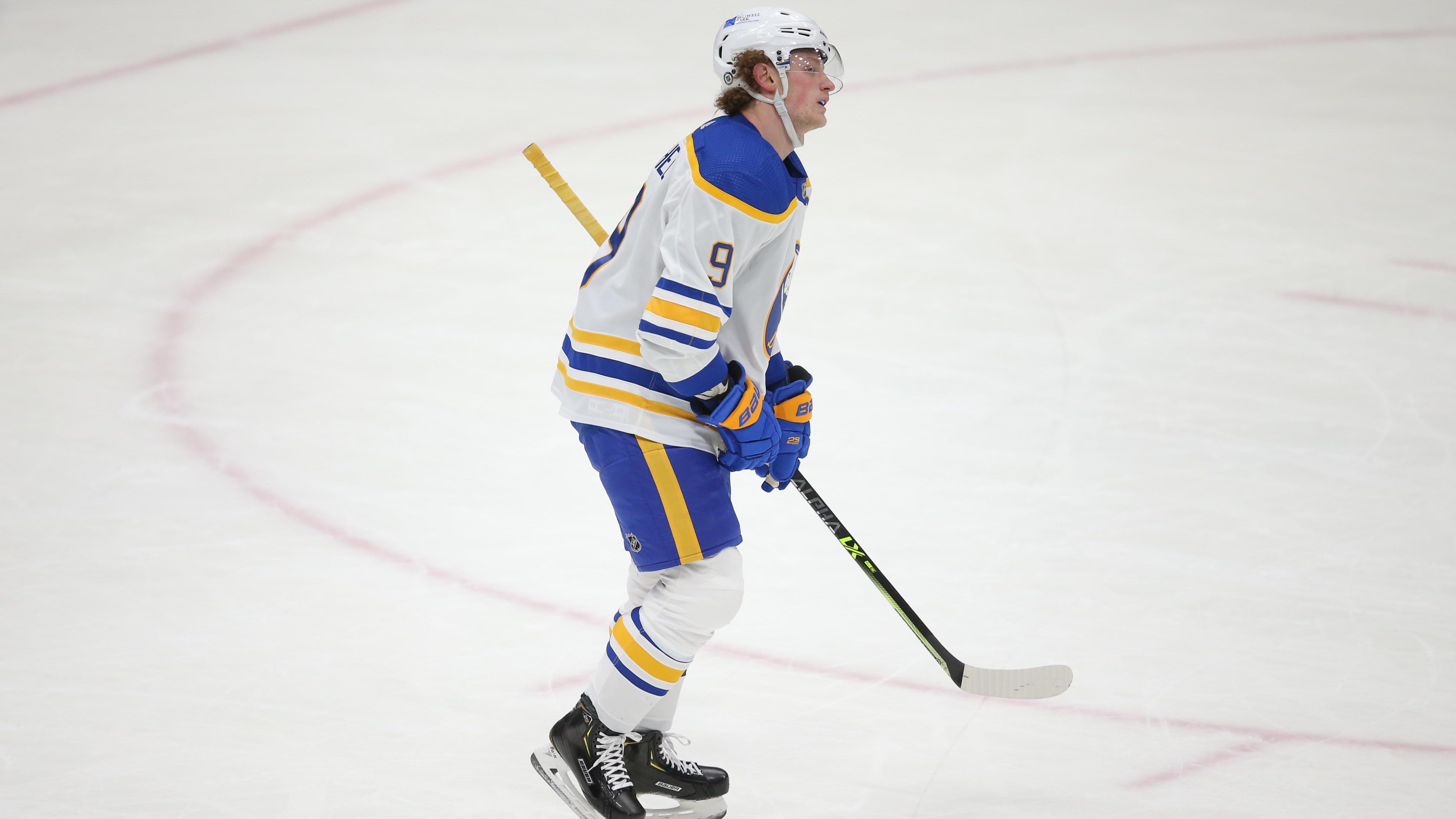 Is surgery the right move for Jack Eichel?

From there, Sabres general manager Kevyn Adams went to the phones and started taking phone calls from teams around the league inquiring about Eichel's services.

At the start of trade discussions, it was reported the Sabres were looking for the equivalent of four first round assets in return for Eichel. Adams dug in with the mindset that the team has to get value in return for a player of Eichel's caliber to set the Sabres up for long-term success in the NHL. That steered many teams away from making a deal over the summer months, especially with the uncertainties of the medical procedure Eichel wanted added into the mix.

As time went on, the Sabres remained staunch on getting the right value in any trade with another team interested in acquiring the franchise centerman. Teams like the Los Angeles Kings, Anaheim Ducks, Minnesota Wild and New York Rangers were all reported to be seriously in the mix, but no team was willing to give up the farm for a player with a ton of talent but uncertainties surrounding his long-term future in the league.

The Golden Knights have been talked about as a potential suitor for an Eichel deal throughout the entire process, perhaps not as much or as wildly popular as other teams, though. Vegas remained in the mix as time went on, and finally, they were able to strike a deal that brings the former second overall pick in the 2015 NHL Draft to the "Sin City".

More importantly, for Eichel, this trade will now allow him to get the disk replacement surgery, as the Golden Knights have reportedly said they are OK with Eichel going under the knife with his preferred procedure in mind. This will allow for Eichel to potentially return to the Vegas lineup as soon as late February after the break for the 2022 Winter Olympics in Beijing, China.

Eichel ends his six-year stint with the Sabres by scoring 139 goals and registering 216 assists for 355 points in 375 games. He ends his time in the blue and gold finishing 18th in franchise scoring, 19th in goals scored, and 23rd in assists.

Coming back to Buffalo includes a pair of players that have the potential to make an immediate impact with the Sabres at the NHL level.

Krebs was regarded, by many, as the Golden Knight's top prospect in their system heading into the 2021-22 season. Vegas made Krebs the 17th overall pick in the 2019 NHL Draft after two stellar seasons in the Western Hockey League with the Kootenay Ice. He fell down the draft board a bit in the 2019 draft after suffering a torn Achilles tendon weeks before the draft.

Upon returning from injury after the team moved to Winnipeg, Krebs continued to bring success to the Ice, scoring 12 goals and picking up 48 assists for 60 points in 38 before the 2019-20 season was shut down due to the COVID-19 pandemic.

Just last season, Krebs took part in the 2021 IIHF World Junior Championship with Canada, where he produced three goals and five assists for eight points in seven games. He finished the tournament tied for second in team scoring with Washington Capitals prospect Connor McMichael, and helped the Canadians to a silver medal finish. Sabres forwards Dylan Cozens and Jack Quinn were teammates of Krebs during the tournament.

Krebs returned to Winnipeg for his final season of junior hockey in the WHL, where he dominated the league with 13 goals and 30 assists for 43 points in just 24 games. For his play in the shortened 2020-21 WHL season, Krebs was named as the league's Player of the Year in his third season as team captain.

The 20-year-old then joined the Golden Knights organization and ended up getting his first taste of NHL hockey towards the tail end of the season. Krebs would play five games with the Henderson Silver Knights in the American Hockey League - scoring a goal and four assists - before earning a four-game stint with the Golden Knights, where he picked up an assist for his first NHL point.

At the start of the 2021-22 season, Krebs played two games with Henderson, picking up five assists before being called up by the Golden Knights. He ended up going pointless in nine games in Vegas before the move to Buffalo.

While Krebs stands at just 5-foot-11 and 190 pounds, the forward is as speedy and crafty as they come. He is shifty on his feet with the ability to cut on a dime, while also playing a smart game with good vision and puck skills as a passer. While Krebs is not primarily known as a goal scorer, he has a dangerous shot that gives him the ability to be a finisher.

Krebs was named the WHL’s 2020-21 Player of the Year after leading the league in assists (30) and points (43) in 24 games during his third year as captain of the Winnipeg Ice. pic.twitter.com/e9CqjiBmHL

Despite being on the Golden Knights' roster at the time of the trade, Adams said that Krebs will begin his stint in the Sabres organization in the AHL with the Rochester Americans.

Krebs is currently playing on Year 1 of his entry-level contract that he signed with the Golden Knights. He has two years remaining on his deal worth $863,333 each season.

As for Tuch, the native of Syracuse joins the Sabres as a young, but experienced veteran of the NHL.

Tuch was a first round selection (18th overall) of the Minnesota Wild in the 2014 NHL Draft. After playing two seasons of college hockey at Boston College, he signed his entry-level contract with the Wild, spending most of the 2016-17 season in the AHL with the AHL's Iowa Wild.

As part of the Vegas Expansion Draft in 2017, the Wild made a side deal with the Golden Knights, sending Tuch to Las Vegas with the intent of protecting some other assets on the roster.

Almost immediately, Tuch became an integral part of the Golden Knights' roster with his size and impact as a middle-six winger. The 6-foot-4, 220-pound forward played in 78 games with Vegas in his first season, scoring 15 goals and adding 22 assists for 37 points. In the playoffs, Tuch continued to play well with six goals and four assists in 20 games, helping the Golden Knights to a Stanley Cup Final appearance against Washington.

The 25-year-old is a player that can do it all on the ice. He has the size and strength to be a force in front of the opposing net, while also having the speed and skillset to be a dangerous offensive weapon on the rush.

This past offseason, Tuch underwent shoulder surgery that put him out of action for approximately six months. However, Adams said on Thursday that Tuch is progressing nicely in his recovery and is likely to remain out for the next couple of months.

Tuch is currently in Year 3 of a seven-year contract he signed with the Golden Knights back in October of 2018. He is currently earning an average annual value of $4.75 million.

You can listen to Adams' entire conference call with the Buffalo media from Thursday below:

Thank you for everything, Jack.