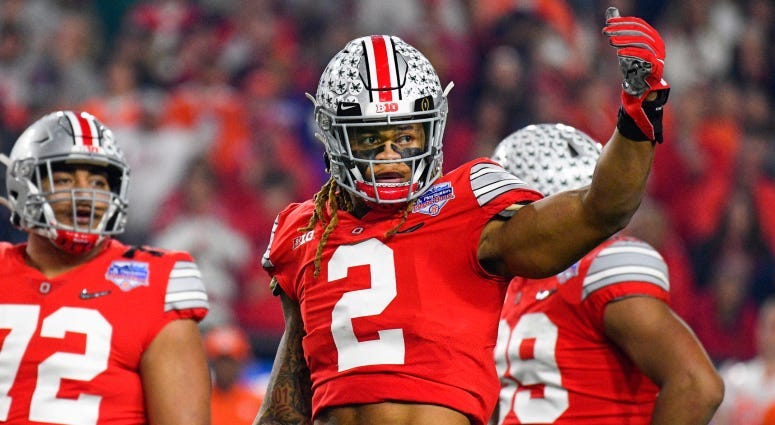 The challenge for Chase Young is the one that swallowed predecessor Robert Griffin III – don't become too big for the job.

Washington's No. 2 overall pick is the tip of the spear among a talented pass rush, but there's a whole lot behind him. Young doesn't have to be great right away to help.

Griffin did when arriving in 2012. Quarterbacks are expected to lead quickly. I've never seen a rookie with so much hoopla who was also immediately respected by teammates. And, right up to that career-defining injury in the playoffs, Griffin was everything expected.

But, everyone could see Griffin limping badly midway through the first-round game except the coach and the passer who wanted to win too badly. Griffin's injury worsened, the team lost and nothing was ever the same again.

So the warning for Young as Washington begins training camp is just be you. Don't try to be the next Dexter Manley or Charles Mann. Don't play every snap.

"When we did get to see him fly around on the grass," defensive line coach Sam Mills said, "you can tell he's been studying. He knows what he's doing right now, and it's not too big for him. With a rookie, you always worry about a kind of mental overload and he's been really good so far. I'm just excited about his future, and I'm excited about how fast he's picking everything up."

Luckily, Young is part of the team's best unit and perhaps one of the NFL's better lines. It should be with four recent first-rounders plus a fifth in old-timer Ryan Kerrigan. The team moved to a 4-3 after a decade of favoring four linebackers in a passing league. Under Mills, Washington will opt to attack passers instead.

"Passing is not a 'sometime' thing," Mills said. "People may try to come out and run the ball on us and we're going to stop that. If they go to throw the ball, we've got to be ready to rush.

"A big component of our defense is penetrating and attacking. We're going to put pressure on offense and not just sit back and let them dictate to us what's going to go on. I think part of getting after the quarterback is going to be is just our approach to it and being more aggressive."

Thankfully, Washington can come in waves. That's why a valuable high pick like Young can pick his moments and not play through fatigue.

"If we're playing good on defense," Mills said, "we should be on the field anywhere between 55 and 65 snaps, and you don't want a guy to play all those snaps. There's no need when we have able bodies to go along with him, so we can have a fresh rotation and everybody can get a piece."

"Some people see it as a problem, I see it as a great opportunity to keep fresh rushers on the field to be honest with you. A lot of these guys can play. They're going to learn to play multiple positions. In today's climate in the league, you got to be able to be flexible. I'm looking forward to the different groups we can match up and basically say, 'Hey, I want you to go in and when you're all spent, we've got another guy coming in with fresh legs ready to go.' So, I think this group is going to lean on each other and they're going to work together."

So Young can lead, but sometimes from the sideline. He doesn't need to make it all about himself in a position that revolves around his play. Instead, Young can simply set the tone.