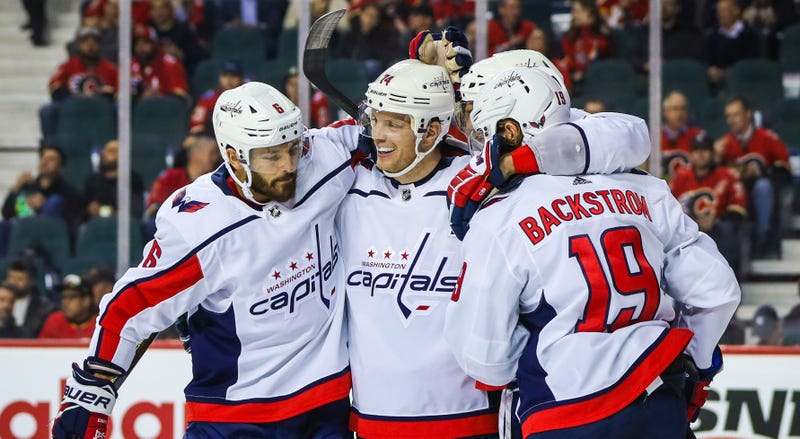 The Capitals have rebounded from a rocky start and now, with 16 points, find themselves at the top of the Metro Division.

Todd Reirden, now in his second season as head coach, has put his stamp on this roster, transforming the Caps into more of a skating team, a move Reirden admits he would have liked to have made last year, but just didn't have the players or time to do it.
"I think it's a little bit roster-based. I think it's a little bit league-based too," Carlson told Chad Dukes during his weekly 106.7 The Fan appearance, presented by The Purple Heart.

"Like we've always talked about, it's a copycat league and teams that have success, everybody's trying to follow suit systematically and all of that," he said. "I think what he means in a skating game would be just more aggressive. I think especially in our neutral zone.

"I know in years past, we kind of sat back with three guys across our blue line and try to take away rush chances from other teams, and now we're a little more in their face making them make plays before they want to or are able to, and forcing a lot of turnovers to create some more offense for ourselves."

Carlson was an early champion for Reirden to take over for Barry Trotz, once it became clear the Caps weren't going to retain their Stanley Cup-winning coach.

"Honestly, I probably deal with him a lot less than before, because he was the D coach obviously before and now, different responsibilities running the forwards during the games and all that," he said. "I think everybody, from the coaching staff to the players, we didn't like how last year ended and we made a point in training camp to get off to a good start, and work through some things that we thought we didn't do too well in the playoffs last year."

"I think we've changed a lot of that. I think we're playing a lot more aggressive," he said. "You see the D pinching down a lot more. We're taking away opponents' time and space a little bit more, making it harder for them to break out of the zone and I think that's really helped us."

"And then starting games," Carlson added. "I think we were not a great starting team last year and got into some holes we weren't able to overcome. We talked about that relentlessly through the early portion of this year and I think we've been really, really good with that."

(Carlson's appearance begins at the 20:20 mark below.)