Jerry Jones caused a bit of a stir on Thursday when he made comments that he would welcome a quarterback controversy with Dak Prescott out with an injury.

Naturally, that left Dallas Cowboys head coach Mike McCarthy responding to questions about his boss’s comments when he joined Shan and RJ on 105.3 The Fan Friday morning.

“I think the first part [of his comments], he was talking about winning, and it’s all about winning this time of year,” McCarthy said. “We obviously want Cooper [Rush] to be a big part of that. I think the second part is, obviously, something that [the media] are probably having some fun with. So, enjoy yourself, drink your black coffee and go for it.”

Jones was asked if he would welcome a quarterback controversy and responded: “Of course I would . Of course. That means we’d. have won. If he comes in there and plays as well as Prescott played, Rush? Played that well over these next games ahead? I’d walk to New York to get that.”

When Jones was asked if he thinks Rush can do that he said “I don’t know” but added that you can’t find him saying anything where thought Prescott could do it either when he first got the chance to play.

While Jones was leaving the door open to different scenarios, McCarthy was quite clear where things stand.

“I think clearly everybody in our locker room, everybody in the building — Jerry included — Dak is our quarterback,” he said. “We want Cooper to be as successful as possible. I think it stops right there.”

As far as dealing with the fallout of Jones’ comments, McCarthy does not mind because he knows Jones made them out of his will to win.

“At the end of the day, we’re focused on winning,” McCarthy said. “As I read it, or was told about it, Jerry’s media comments are about winning.” 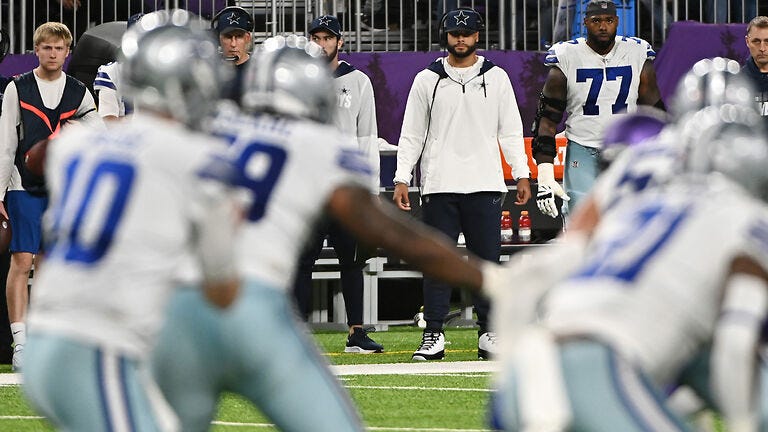