The Deshaun Watson suspension saga seemed to reach its long-belated conclusion on Thursday, when it was announced the league and the Browns quarterback had agreed on a settlement.

The terms were an 11-game suspension, a $5 million fine, and independent psychiatric treatment and evaluation, all seemingly unprecedented in the annals of league history.

Yet the public response, or at least the one on social media, was overwhelmingly negative, with many fans and journalists indicating that Watson had gotten off easy.

The truth is there's no punishment the NFL could have handed down that would have been satisfactory, because the allegations leveled against Watson can't be settled in games missed, fines paid, or therapy sessions attended. 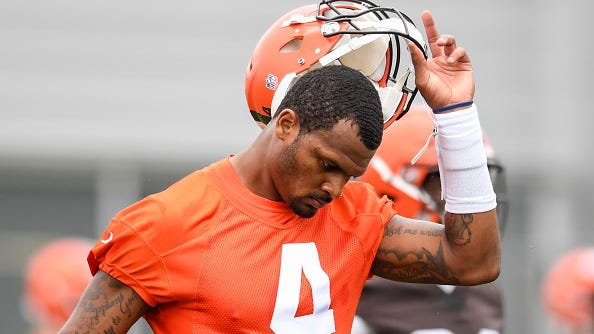 Watson was accused of serious crimes, yet the actual criminal justice system failed spectacularly to deliver justice to his accusers. The case never even reached trial, where the preponderance of evidence and accusations could have been weighed in a public setting by a jury of Watson's peers.

The preempting of justice by punting to a grand jury and allowing the prosecution to tank the case has become a familiar playbook for the rich and powerful, most commonly in cases of police misconduct. It's an especially egregious violation of the spirit of justice, since it's famously been said that a prosecutor can indict a ham sandwich if they really want to.

As to how and why it transpired this way in Watson's case, we can only speculate. We know it's not because the cases didn't have merit, because Watson settled all but one of the civil lawsuits filed against him, which is widely perceived to be an acknowledgment of wrongdoing, and he also publicly apologized (before later reversing course). But, by law in Texas, where the criminal investigations were conducted, grand jury minutes are supposed to be secret, violation of which is punishable by fine and potential jail time.

What little reporting there is on the grand jury proceedings came courtesy of Jenny Vrentas and Kevin Draper of The New York Times, and Mike Florio of Pro Football Talk. According to Florio, the grand jury in the first case, in Harris County, requested to hear testimony from just one accuser, despite at least five being on-hand and ready to testify.

Florio basically suggested that the prosecutor was not interested in indicting Watson:

So why wouldn’t the prosecutor in this case not want an indictment of Watson? Possibly, she truly believed no crimes had been committed. It’s also possible that she believed she would not be able to prove guilt beyond a reasonable doubt at trial, even if she believed that Watson had crossed the line.


Soon after the grand jury returned no indictment against Watson, Harris County District Attorney Kim Ogg went out of her way to clarify that the absence of criminal charges is not the same as an exoneration -- contradicting declarations of innocence from Watson's camp and even a few NFL insiders such as ESPN's Adam Schefter:

"We respect our justice process," Ogg said during a podcast appearance. "I love the law. It's designed to get to the truth. That's really what people want. I don't think as a culture we can live with injustice. Remember, a grand jury no bill is not an exoneration. People, even when they clear the criminal justice system, often face accountability and repercussions in other parts of our legal system. And so, I think to determine whether justice was done in this case, you're going to have to wait and see how it all comes out on the civil side of things, and then through the NFL on the administrative side of things. And then people will determine whether that's justice."

This seems like an odd position for a district attorney to take. Ogg, a confounding and polarizing figure in Houston politics, appeared to imply that Watson was guilty, or at the very least was not innocent -- a distinction that seems to epitomize lawyerly doublespeak -- while at the same time washing her hands of the case, instead deferring to the prospect of "accountability" through civil lawsuits and the NFL disciplinary process. This is an especially egregious claim given the NFL's long history of botching disciplinary cases, a pattern that predictably continued with Watson's case.

In any event, people have indeed determined whether "that's justice," as Ogg put it, and the answer is no. Leaving the matter to the civil courts and the NFL's kangaroo court didn't constitute justice then, and it doesn't now.

Still, there is a sense of outrage that Watson escaped all of this relatively unscathed, even if he's a little lighter in the wallet and his reputation is in tatters. What is a few million bucks to someone who has already earned millions and is still owed $230 million? What is 11 football games to someone who has already played hundreds of games and will surely play scores more?

Those who are upset over Waton's penalty certainly have a right to feel that way, given the nature of the weighty allegations.

But their mistake was ever thinking a professional football league could or would deliver justice in any meaningful way.

The criminal justice system isn't broken; it's more accurate to say it has a perverse sense of justice. The NFL, through its own experiences, knows this all too well, often being left to mete out punishment where the courts have failed or declined to do so. That is why the league created its kangaroo court in the first place -- because leaving such decisions to one man, Roger Goodell, was unseemly even by the league's warped standards.

The kangaroo court, populated with some of the same functionaries and career political operatives who run the real courts, returned a similarly underwhelming verdict as what Goodell himself would have done in years past. In essence, the league created the corrupt justice system within its own halls, in miniature, and it worked accordingly.

To expect anything different, though understandable, fails to take into consideration the world as it exists. The criminal justice system that let Watson off the hook without even a trial desperately needs to be reformed, and no NFL kangaroo court can change that.