Many college football enthusiasts would have never guessed that two powerhouse programs like Texas and Oklahoma would bolt to the SEC. Those fans were equally as shocked when the news broke Thursday that west coast schools USC and UCLA would be heading to the Midwest-based Big Ten conference in 2024 after their applications to join were approved.

While the reaction to the news has left fans with a bad taste in their mouth about the state of the sport, former Ohio State head coach and failed NFL coach Urban Meyer thinks Thursday's news makes sense to him.

“I’ve seen conference realignment like we all have over the years, and to be quite honest with you, it didn’t make a lot of sense, where this school is going to jump to this conference and there’s not really a rivalry there, there’s not a foundation for recruiting, but this one makes sense to me,” Meyer said.

Some conference realignment doesn't make a lot of sense. @UCLAAthletics and @USC_Athletics to the @bigten is not an example of that.@CoachUrbanMeyer tells @BTNDaveRevsine why he loves the additions ⬇️ . pic.twitter.com/rSE9B4BfGH

Say what you want about Meyer or his take but before his stint with the Jaguars, he was arugbly the "Nick Saban of the Big Ten," coaching Ohio State for several seasons, winning the first CFP national championship in 2014. Meyer resigned from the role after he failed to punish former wide receivers coach Zach Smith after allegation of domestic violence surfaced in 2018. a

Despite the closest school to UCLA and USC being Nebraska (who's almost 1,500 miles away from the LA metro area) in their new conference, Meyer says it will help everyone, from recruiters looking to poach players from the talent-rich state of California as well as for players families who will get to see them play a lot more on television.

“There are some great, great football players in Los Angeles. That, when USC and UCLA are down a little bit, you can go cherry pick them a little bit. But now you’re going to see the floodgates open up in my opinion because now those families will be able see their sons play. It makes a lot of sense to me. And academically, reputation, and there are natural rivalries between UCLA, USC and the Big Ten Conference.”

While some Buckeye fans will always remember him for bringing Ohio State back to national prominance, he may have had one of the worst tenures as a head coach in NFL history. A video of Meyer surfaced, showing the disgraced coach dancing with a woman, who was not his wife, on his lap following a loss to the Bengals. Things got even worse when multiple reports came out about Meyer berating his staff and at one point even kicking his kicker, Josh Lambo. He finished his first and only season in the NFL with a 2-11 record before ultimately being let go.

However, Meyer will continue to grace our television sets as he plans on rejoining FOX Sports. 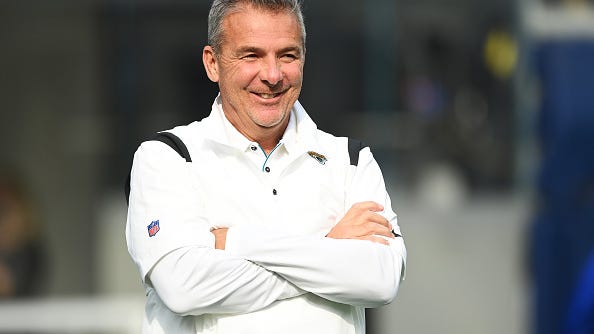 Urban Meyer: 'I plan on going back' to FOX