Welcome to "Best Ball Mania III", the tournament that seemingly almost everyone in the fantasy football space is playing in and talking about.
The tournament exists on Underdog Fantasy, a game-changing site with attractive games across several sports, daily and season-long, usually with smaller price points and sometimes massive prize pools.

You don’t have to convince me of fantasy’s tremendous popularity (although some do still try to convince me that it’s niche, ugh). How’s this for volume? "Best Ball Mania" houses a tidy 451,200 teams, all drafted this offseason, at $25 a pop. There’s $10 million at stake, with $2 million to first place.

Much of the fantasy discourse this year has focused on this event: Who to draft, how to build, whether to consider Week 17 matchups relevant, if not crucially important.

(Why would they be important? Because to win the $2 million you have to beat 469 other teams in Week 17, a one-week tournament final, and probably your only chance of doing that is to have a game or two “blow up” on the scoreboard - and for you to have multiple players in that game. Since everyone else is weighing in on this strategy, I’ll do the same: Yes, it's hugely important and any team of mine lacking in Week 17 pairings I consider necessarily a failed draft. I memorized the Week 17 schedule at least a month ago.)

If you’re drafting numerous teams in a tournament like this (the maximum allowed is 150), you want to make sure you:

A.) Have some shares of most top players, if not all
B.) Are not too “overweight” on pretty much anybody

With that, I’m constantly monitoring how many shares of each player I have. When I see a zero next to someone prominent on my spreadsheet, I try to make a point to grab them next time around.

I’ve drafted 28 BBMIII teams to date. I’m going to look through my portfolio now and pick out a few players whose share totals jump out to me. Why have I chosen this player this often, or why have I faded this player entirely? How about we do one player from each category at each position? 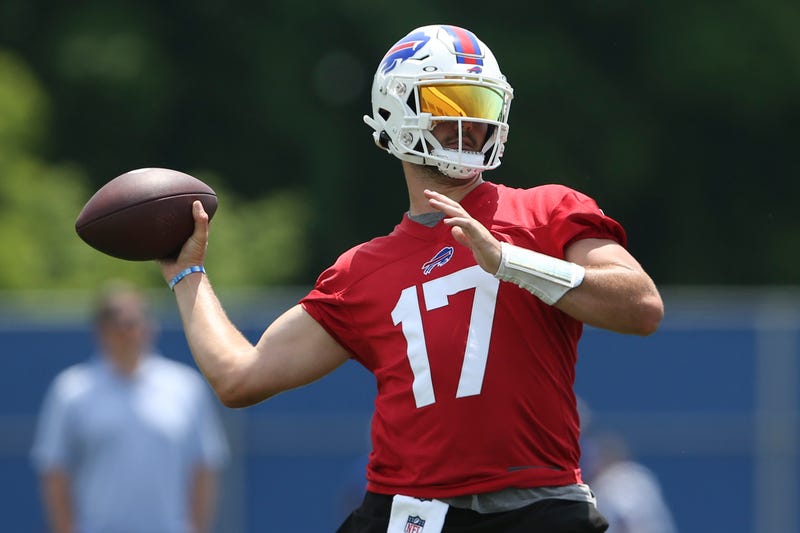 No need to waste your time on the pro-Allen case, because it’s all obvious. QB1 two years running. Whether I choose him rides entirely on that Week 17 stack point and draft position. In all five cases, I picked him in Round 3. Some at the top of the round, to pair with a Cincinnati Bengals player (Buffalo Bills’ Week 17 opponent), some near the bottom because I thought he was good value.

The five Wentz shares also reflect the importance I see in stacking teammates. Many Washington Commanders players last until near the end of drafts, including Wentz. These are 18-round drafts, and in one I picked four Commanders from Round 12 to the end (Jahan Dotson, J.D. McKissic, Wentz, Logan Thomas). About the cheapest of stacks.

This is not by design – I just can’t get him!

Huge scoring potential on his own, easy stacks with Austin Ekeler, Keenan Allen and Mike Williams (all of whom are Top-30 picks), and a sexy Week 17 matchup with the Los Angeles Rams.

Players are hot for Herbert. I’m determined to not stop drafting these teams until I land him, at least, once. 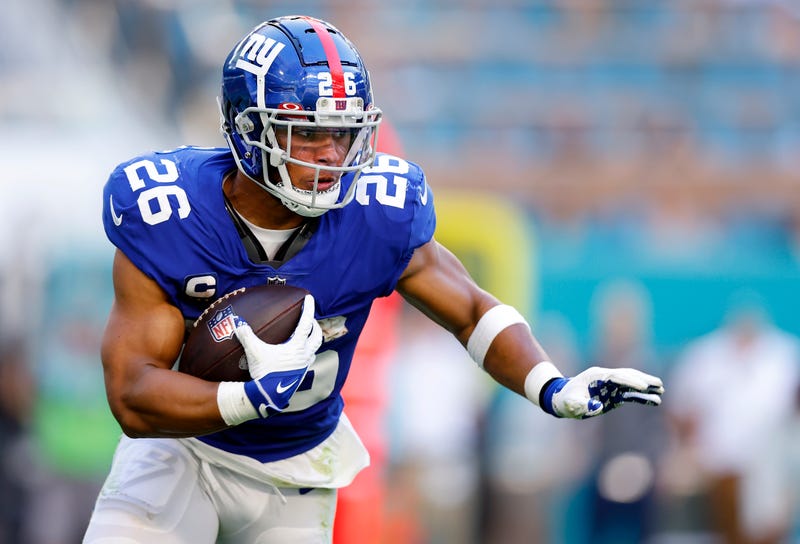 Obviously at 32% ownership, I’m all-in on both players.

This is especially true of Barkley, who usually goes late-second or early-third round. Barkley has been discounted because of his injury history, but in my mind, many times players overrate that, thinking falsely that it tells us much of anything about what’ll happen in the future. I love the move to Brian Daboll for Barkley, who has little in the way of competition at the position.

And, as I’ve been lucky enough to draft first overall six times in this event, I’ve put Barkley with Jonathan Taylor because, yes, the Indianapolis Colts play the New York Giants in Week 17.

Hall is a tougher puzzle here. I expect the player and the workload to be fine, but he’s not at all the obvious stack or correlation play others are. (The New York Jets play the Seattle Seahawks in Week 17.) Usually these are drafts where I’ve started WR-WR, or maybe an early tight end. Hall stands out to me above running backs in his tier.

Apparently, I sit completely out on several potential high-scoring, even league-winning backs. The only common thread here is roster construction. You start three receivers on Underdog, and I’m loathe to pile up running backs early in drafts. I almost cringe at the thought of it.

So, instead of mid-to-late first-round picks like Harris, Cook and Derrick Henry (one share because I made myself), I’m taking Stefon Diggs, Davante Adams, Travis Kelce, etc.

And I’m taking Hall over Montgomery and Jacobs. I definitely need to diversify a little bit better there though. 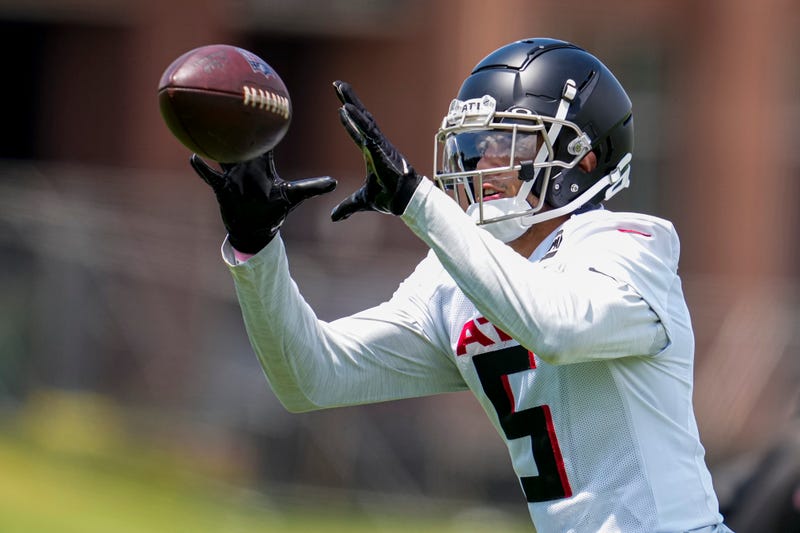 I do think London is positioned to get big targets in Atlanta, even as a rookie. There’s little competition at the position, he’s got first-round draft capital, and they should be losing a lot.

Having McLaurin makes those late Wentz picks more appealing. Thomas, for me, is like a “shrug emoji” pick; Monday night in a draft, I picked him two rounds later than he has been usually going. I mean, OK?

Anderson I am strong on, as I think he’s being picked at his floor in Round 15 or thereabouts. Competition for targets should be scant, and Carolina also should be behind often, which is good for receivers.

Williams on this list is not for a lack of trying. See Herbert. Los Angeles Chargers builds just haven’t fallen my way. Obviously Allen applies there too, but I’m less bullish on Allen given his age.

As for Johnson? That’s with conviction.

I’m predicting the quarterback change in Pittsburgh to be a plus for Chase Claypool (five shares) and a minus for Johnson. Ben Roethlisberger dumped the ball to Johnson so often (and Najee Harris), and I can’t believe the Steelers – whoever their starter is this year – won’t want to be different, more downfield-oriented.

Johnson is a fine player, but I think that sets up better for Claypool, and Johnson goes in a tier where I like all the receivers more (A.J. Brown, D.J. Moore, Allen Robinson, e.g.). 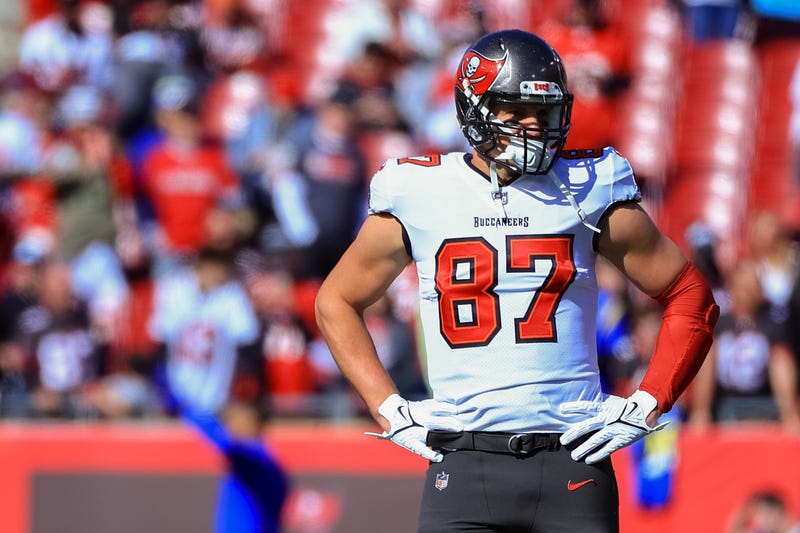 I won’t say I’d be shocked if he doesn’t play this year, but I do think many signs point to his being back with the Tampa Bay Buccaneers. If we knew now that Gronkowski were going to play, he’d be, like, TE6, at worst. Instead, he’s around TE10.

Huge upside, little downside. Home run – and as I do this project I really love that he’s my most-owned player.

Really, if I’m punching in on Gronkowski (and Irv Smith) so often I just have no need for these guys. Sure, one point of diversification is to not get left out on players – but what are the chances any of these guys smash so much that I’ll have regrets?

I have an almost even spread of the top-6-7 tight ends. I don’t feel they’re quite the must-haves that they were last year, but I’m perfectly happy grabbing one.

At the end of drafts, my favorite tight end is Evan Engram, who I think is set up well for target share in Jacksonville; the only Jaguars I’m into are Engram and Travis Etienne.