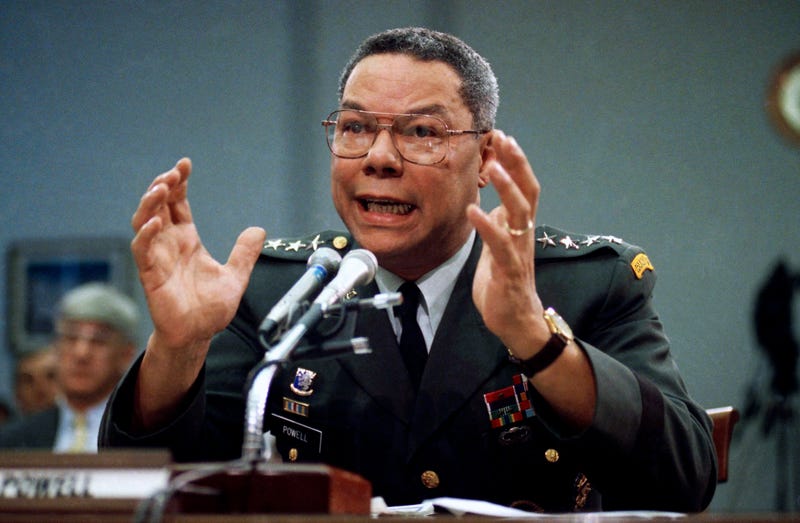 Former Chairman of the Joint Chiefs of Staff and former Secretary of State Colin Powell arrives to pay his respects at the casket of the late former President George H.W. Bush as he lies in state at the U.S. Capitol, Dec. 4, 2018 in Washington, DC. Powell's family announced his death on Oct. 18, 2021.
By The Associated Press

WASHINGTON (AP) — Colin Powell, the trailblazing soldier and diplomat whose sterling reputation of service to Republican and Democratic presidents was stained by his faulty claims to justify the 2003 U.S. war in Iraq, died Monday of COVID-19 complications. He was 84.

A veteran of the Vietnam War, Powell spent 35 years in the Army and rose to the rank of four-star general before becoming the first Black chairman of the Joint Chiefs of Staff. His oversight of the U.S. invasion of Kuwait to oust the Iraqi army in 1991 made him a household name, prompting speculation for nearly a decade that he might run for president, a course he ultimately decided against.

He instead joined President George W. Bush's administration in 2001 as secretary of state, the first Black person to represent the U.S. government on the world stage. Powell's tenure, however, was marred by his 2003 address to the United Nations Security Council in which he cited faulty information to claim that Saddam Hussein had secretly stashed weapons of mass destruction. Such weapons never materialized, and though the Iraqi leader was removed, the war devolved into years of military and humanitarian losses.

Powell was fully vaccinated against the coronavirus, his family said. But he faced several ailments, telling Washington Post journalist Bob Woodward over the summer that he had Parkinson's disease. Powell's longtime aide, Peggy Cifrino, said Monday that he was also treated over the past few years for multiple myeloma, a blood cancer that impairs the body’s ability to fight infection. Studies have shown that those cancer patients don’t get as much protection from the COVID-19 vaccines as healthier people.

In a Washington where partisan divisions run deep, Democrats and Republicans recalled Powell fondly. Flags were ordered lowered at government buildings, including the White House, Pentagon and State Department.

Noting Powell's rise from a childhood in a fraying New York City neighborhood, Biden said: “He believed in the promise of America because he lived it. And he devoted much of his life to making that promise a reality for so many others.”

Powell's time as secretary of state was largely defined by the aftermath of the Sept. 11, 2001, terror attacks. He was the first American official to publicly blame Osama bin Laden's al-Qaida network. He made a lightning trip to Pakistan to demand that then-Pakistani President Pervez Musharraf cooperate with the United States in going after the Afghanistan-based group, which also had a presence in Pakistan, where bin Laden was later killed.

But as the push for war in Iraq deepened, Powell sometimes found himself at odds with other key figures in the Bush administration, including Vice President Dick Cheney and Defense Secretary Donald Rumsfeld. Rumsfeld also died this year.