Billy Kilmer was a scrapper. He missed a season after a horrible car accident that turned the mobile quarterback into a statue and went 11-29 with two teams.

But Washington coach George Allen saw a winner and traded for Kilmer in 1971 while benching eventual Pro Football Hall of Famer Sonny Jurgensen. Kilmer's stats weren't breathtaking like Jurgensen in his prime. His passes wobbled like Weebles, but – dammit – the Redskins became consistent winners under Kilmer after more than two decades of mediocrity.

Enter Taylor Heinicke. The Washington Commanders quarterback isn't the golden boy Carson Wentz was when entering the NFL as a first-rounder. Indeed, Heinicke wasn't drafted and even sat on the bench in a spring league before an injury-decimated Washington desperately needed a passer.

But Heinicke is 10-9 in Washington despite never being the preferred starter. He was slated behind Wentz entering this season and ahead of rookie and possible future starter Sam Howell. Yet, Heinicke is once more the dragon slayer after leading Washington to a 32-21 upset over previously-undefeated Philadelphia before a national Monday night audience.

There really shouldn't be a debate over Wentz returning. Heinicke is the reason why analytics should only be a supplemental consideration rather than measuring players. Just like Kilmer outplayed his stats, so is Heinicke.

Maybe Wentz will be needed later this season. It takes the entire roster to make the playoffs and Washington (5-5) is now only a half-game out of the postseason. The softest stretch of the season lies ahead versus Houston on Sunday followed by Atlanta and then consecutive contests against the New York Giants. 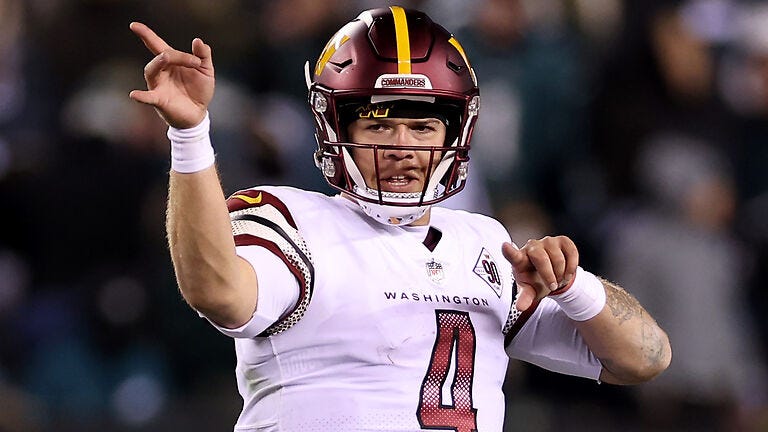 Now is not the time to mess with chemistry. Ride Heinicke as long as possible. He's not always pretty. There was another poor interception at Philadelphia after a killer pick the previous week against Minnesota.

But Heinicke is progressing. He threw away three balls under a heavy Eagles pass rush that would have been sacks earlier. Heinicke managed two frozen-rope completions that show a stronger arm than last year.

Some measurements don't show up on the stat sheet. Heinicke is beloved by his teammates. He's the second coming of Rocky or Rudy. Those guys didn't always succeed, but gained their moments and inspired those around them.

That's something numbers nerds will never understand. Sports is about chemistry and Heinicke has more than Dow Chemical. Lots of quarterbacks throw pretty passes, but not many outrun their potential. Kilmer was 50-23-1 in Washington. Sometimes you just have to believe in a player.

Coach Ron Rivera shouldn't overthink his quarterback role. Go with his gut and that means Heinicke plays . . . at least for now. 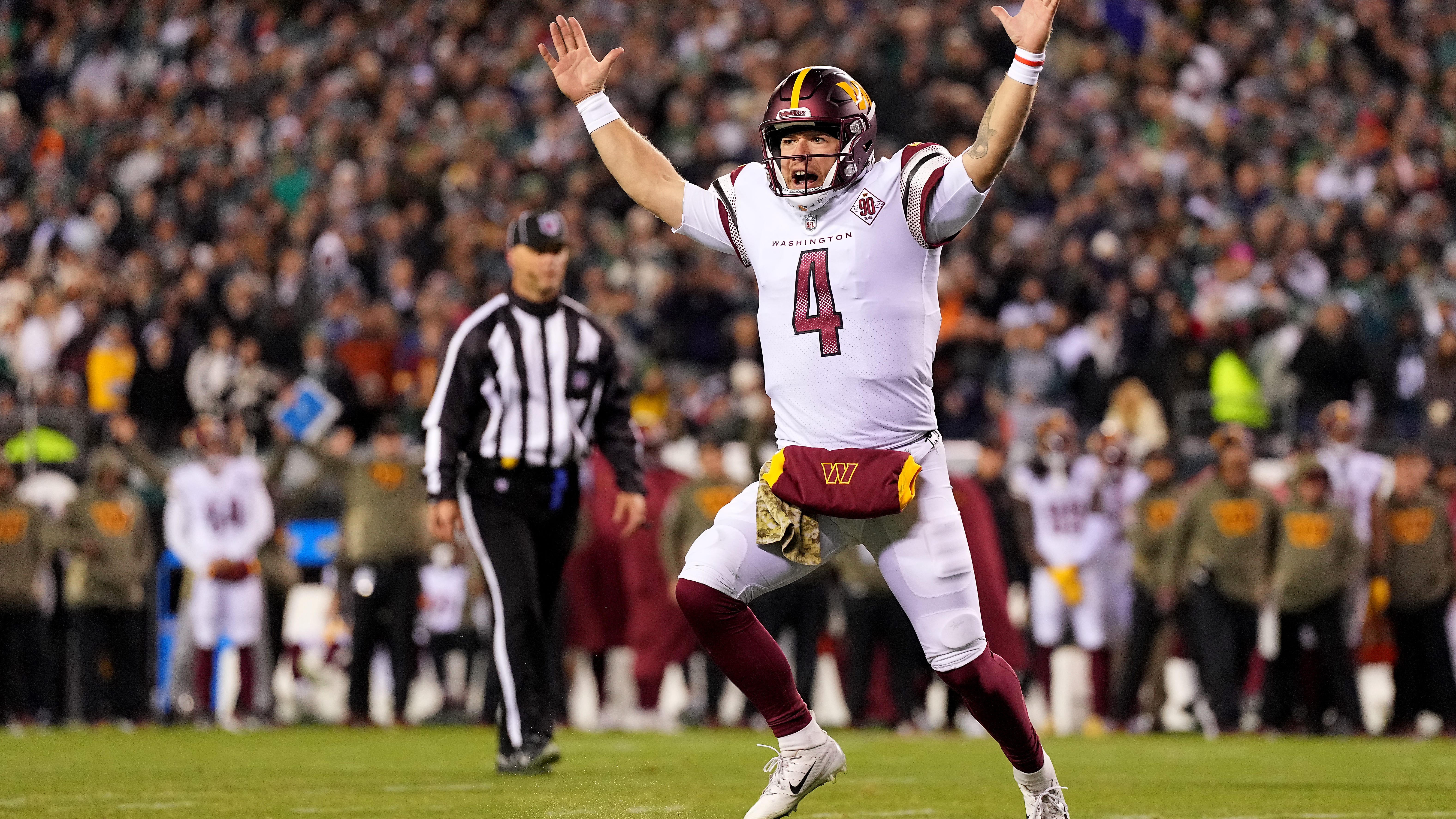 Terry McLaurin voices support for Taylor Heinicke: ‘He plays every play like it’s his last’ 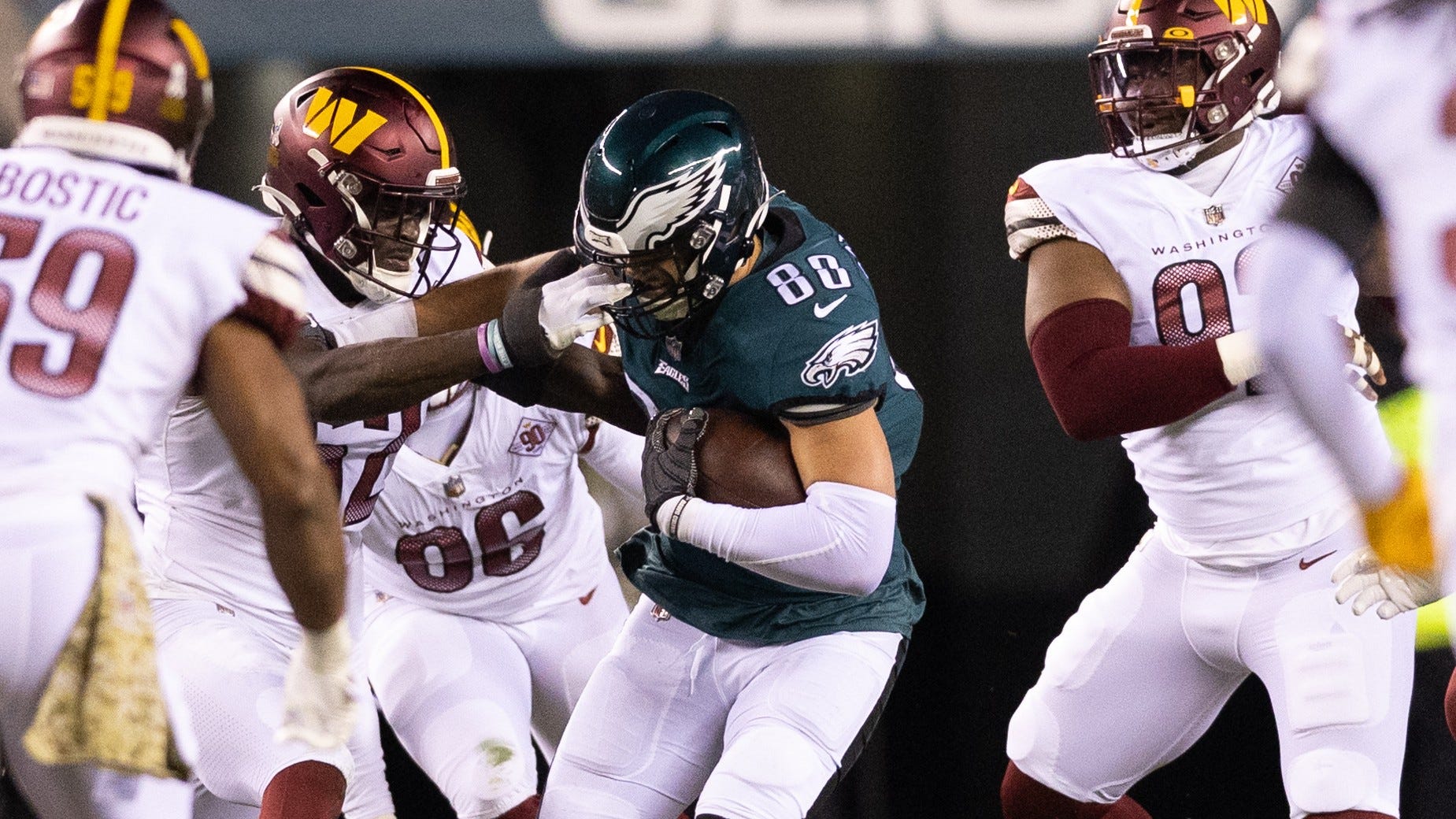 NFL Twitter angry after missed facemask call leads to Eagles fumble in Commanders win
We strive to be a platform where varying opinions may be voiced and heard. The views, thoughts, and opinions expressed by the author(s) of this article and/or by those providing comments are theirs alone, and do not represent those of Audacy, Inc. We are not responsible for any damages or losses arising from this article and/or any comment(s).
Featured Image Photo Credit: Mitchell Leff/Getty Images