Alex Smith is headed to ESPN.

The former NFL quarterback, who retired earlier this year, will be joining the network as a part-time studio analyst, according to Andrew Marchand of the New York Post.

Smith will appear on shows like “Monday Night Countdown” and if things go well it could lead to a larger, full-time role.

Per Marchand, Smith tried out to become a Sunday game analyst for Fox and CBS, but Fox chose to sign Mark Sanchez, previously with ESPN, while CBS did not replace Rich Gannon.

Smith, 37, retired from the NFL back in April following a season in which he was named Comeback Player of the Year — returning to play following 17 surgeries that stemmed from a fractured tibia and fibula he sustained in November 2018.

His comeback story was also documented by ESPN in its E:60 feature program.

Smith started in six games with the Washington Football Team, going 5-1 while tossing six touchdowns for 1,582 yards and eight interceptions .

Washington released Smith after the season, though, and he criticized the franchise as being unsupportive and “patronizing” about his comeback, saying all they wanted was a “cute story.”

Despite some interest from other teams, Smith ultimately decided to retire and will be trying out his hand in television. 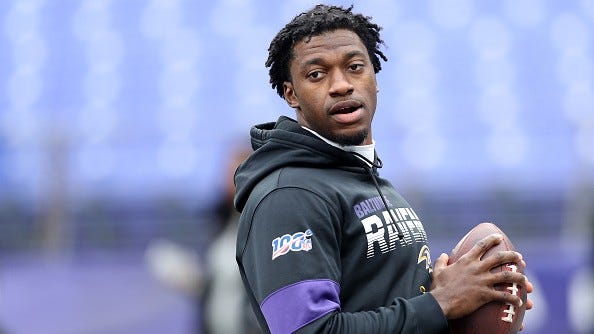