A moment of sweetness quickly turned sour as Washington reclaimed the lead over Seattle late in the second quarter on Monday night.

Trailing 7-3, Landon Collins had just forced a turnover on a fumble moments earlier to thwart a promising offensive drive by the Seahawks. As the clock drained, Washington marched down the field to put the ball on Seattle's 10-yard line. From there, Taylor Heinicke completed a quick swing pass to J.D. McKissic, who took it into the end zone to give Washington a 9-7 lead.

And in a scene which has seemingly played on repeat for Washington all season long, Seattle blocked the extra point attempt. Only, this one was successfully recovered, too, and Washington kicker Joey Slye spun around to give chase. While in pursuit of Seattle ball-carrier Rasheem Green (punter Tress Way, the holder on the play, nearly caught him), Slye pulled up lame with a hammy and slid to the turf for safety to prevent further damage.

Seattle successfully converted the conversion attempt in the other direction, tying the game up 9-9. While Slye was able to kick the ball off on the next play, he would not return in the second half, leaving Washington with Way as its emergency kicker for the rest of the game (more on that shortly).

Washington head coach Ron Rivera confirmed to The Sports Junkies on Tuesday morning — during his weekly interview presented by F.H. Furr — that his coaching staff will be bringing in kickers to try out this week, noting that Slye will be out "a minimum of three weeks" with a hamstring injury.

"Yes," Rivera said when asked if they'd be bringing in kickers for tryouts. "I'll be honest with you. When we were literally walking off the field at halftime, I had my chief of staff, I told her when we get in, let the scouts know that we need to find a kicker and let's see if we can get something done."

"It's gonna be a minimum of three weeks," he said.

Whoever wins the job in Ashburn this week will be kicker No. 4 for Washington, who's gone through Dustin Hopkins, Chris Blewitt, and now Slye this season. While it wasn't Slye's kicking leg that was hurt, he needs his left leg at full strength to plant and drive through the ball, Rivera explained.

"It was his plant leg, so to be able to plant and drive off of it," he said. "I mean, he was trying. He was in tears. I mean, Joey wanted to get back out there so bad. And you love it when guys do that. When guys want to get back on the field and they're doing everything they can. He had him do that — what's that called? — kinetic tape, kinesiology tape, or whatever on the [hamstring]. He tried everything, and unfortunately, he just couldn't drive through it."

Slye's injury thrust Washington into a situation which Rivera admittedly says they weren't prepared for. Way, the emergency kicker, kicks with his left foot, something Kyle Allen, the backup holder, wasn't prepared for. Allen had never practiced holding for a left-footed kicker, so for the remainder of a game that was already tied, field goals were stricken from the game plan for Washington in the second half.

"Again, that's on me, because that's something that we should have really been considering all along no matter what, is that, what happens if he does get hurt," Rivera said. "We should have practiced the left-footed thing. That comes back on me. But, we just decided at that point we're going for everything."

"Unfortunately, he gets hurt. We decided coming out at halftime, I talked to Scott [Turner] about it, that, 'Hey, just remember, Scottie, once we get into field goal range, you've got four downs. So you can call your third down accordingly, and if we score and when we score, we're going for two points consistently.' So we had already set that and that's what we were gonna do, and we were gonna stick with it."

And so when Washington scored the eventual game-winning touchdown, on a 10-yard run from McKissic with 8:30 left on the clock in the third quarter, Washington went for two, successfully, giving themselves a 17-9 lead late in the game.

That go-for-everything mindset came back to bite them late in the fourth quarter. On 4th-and-goal from Seattle's three-yard line, Washington couldn't simply kick a chip shot field goal to take a comfortable 20-9 lead with two minutes and 25 seconds to play. So they went for it, and Heinicke connected with Logan Thomas just past the plane in the end zone in the middle of the field. Ruled a touchdown on the field, the call was overturned upon a replay review on the grounds that Thomas had wedged the ball between his arm and the ground (a judgment that was questionable at best).

After review, Taylor Heinicke's TD pass to Logan Thomas on 4th-and-goal got overturned to an incompletion.

Was this the right call?

Washington came away with nothing on the drive and Seattle got the ball back needing only one score. 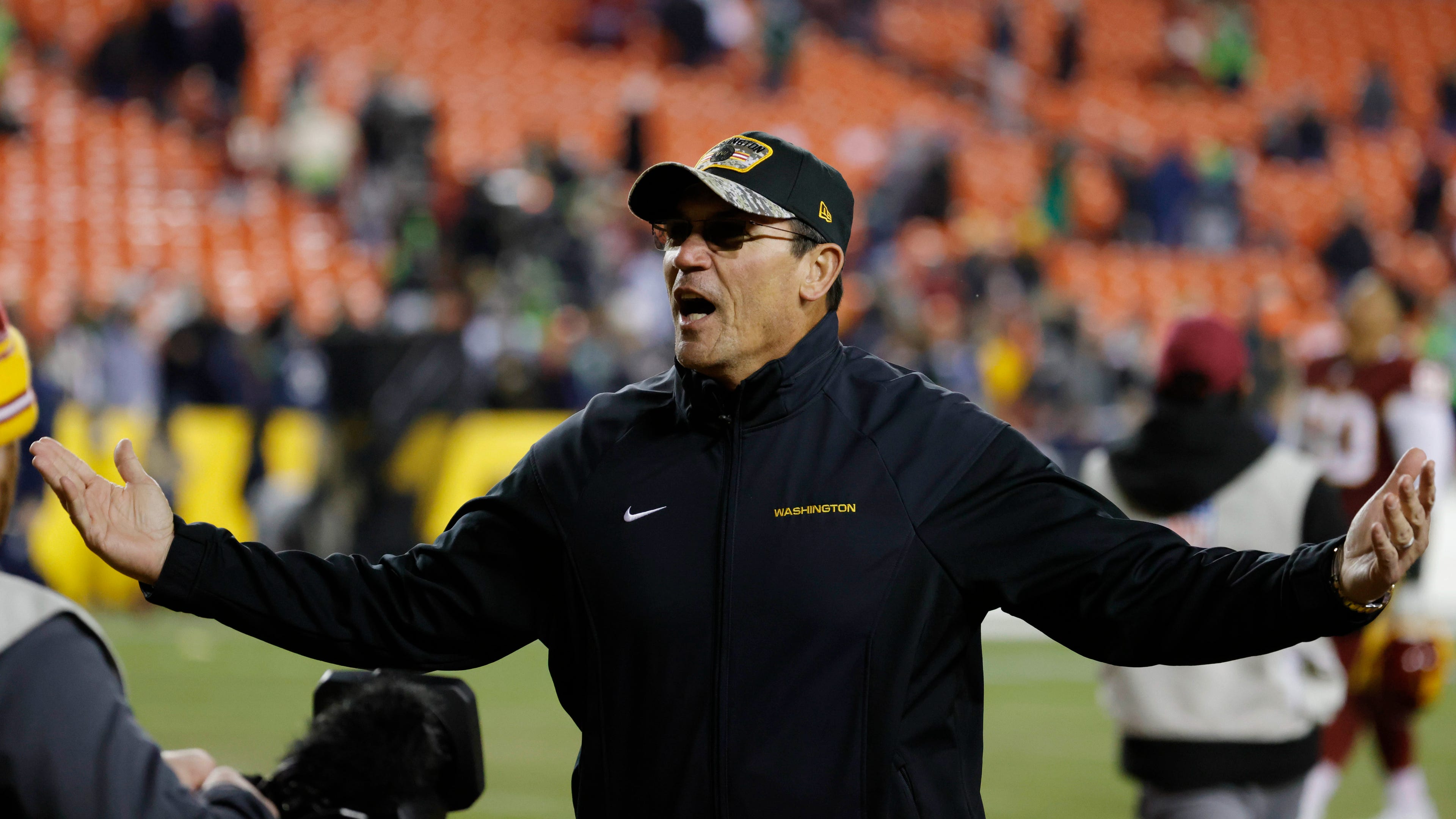