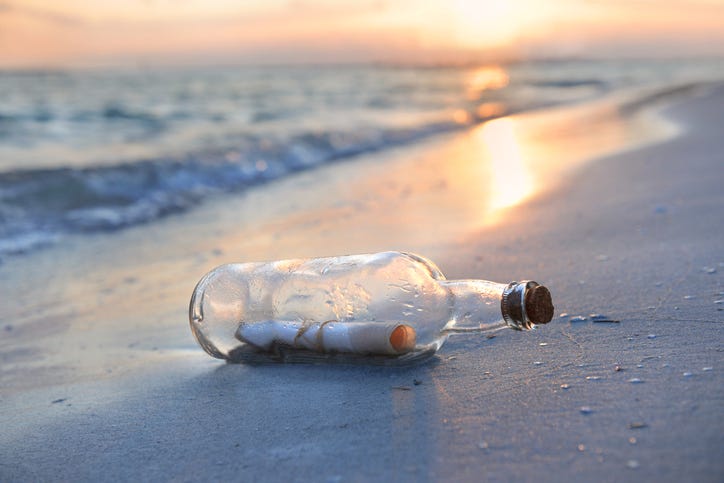 A message in a bottle that was tossed into the Atlantic Ocean in the summer of 2019 has been found nearly three years later and more than 3,000 miles away -- but that's not the end of the story.

The bottle's discovery has brought a wave of fond memories to a young man and his family, who are mourning the recent loss of a dear friend.

Sasha Yonyak, 14, had all but forgotten about the bottle he threw overboard near Ocean City, Maryland when he was 11-years-old, until he received a call from a couple in Ireland.

Rita Simmonds and Ciaran Marron were vacationing in northwestern Ireland on January 5 when they stumbled upon a glass bottle on the beach in Donegal, the couple told the Washington Post. They took the bottle home and let it dry before inspecting its contents.

Inside the bottle was a handwritten note and two U.S. one-dollar bills. The note had a date from 2019 and was written by an 11-year-old named Sasha. He wrote that he had a brother and a sister, and lived in Ocean City, Maryland.

"I love boogie boarding, fishing and much more. I love fish and crabs. I love riding bikes. I am really active person," the note read. "I have 3 buddy's (sic) Stone, Lisa, Wayne."

The note also said, "Please pass it on." It included a phone number and asked whoever found the note to "please, please call."

Simmonds and Marron dialed the number, but it was no longer in service. Knowing the boy was from Ocean City, the couple reached out to a local paper, according to the Post. One thing led to another and eventually the couple connected with Sasha's father on Facebook.

While the bottle was a happy discovery and mystery for Simmonds and Marron to unravel, it served almost as a sign from the great beyond for Sasha and his family.

One of the names in Sasha's note, Wayne, referred to his then 62-year-old next door neighbor Wayne Smith. Despite their age difference, the two were best friends who spent days together on the boat fishing. It was during one of these fishing excursions that Sasha and Smith found that exact same bottle with a message and two dollars inside. The pair decided to do the same thing and two weeks later, tossed the bottle back into the ocean.

Sadly, Smith died in August at age 64. Although he died without ever knowing that their bottle was found, its discovery has given Sasha and his family a chance to remember just how special he was.

"This bottle reflects the friendship of Mr. Wayne and Sasha," Vlad Yonyak told the Post. "Mr. Wayne is no longer with us, but what he did with Sasha is. His deeds are living."

Yonyak is hoping to plan a trip so Sasha can travel to Ireland to visit where the bottle was located and to meet Simmonds and Marron.