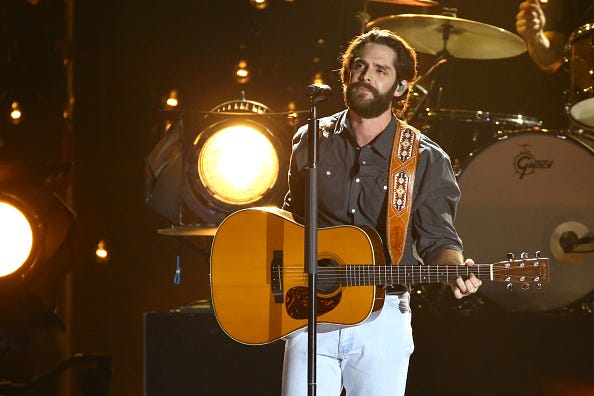 Thomas Rhett's classic love song, "Die a Happy Man," is one of his biggest hits, garnering acclaim like being named the Song of the Year by the Academy of Country Music and the Country Music Association, as well as an ACM Single of the Year, and Thomas credits that to the authenticity and truth of the lyrics.

“We were on a bus in Little Rock Arkansas, and I kinda just looked back and I was like, man, I’ve never actually written a song about my wife or for my wife," Thomas recalls in a statement from his label. "And so, two of the guys that wrote it [Sean Douglas and Joe Spargur] - one of them has a girlfriend and the other one is married, and so we all sort took collaborative ideas and came up with this song called ‘Die a Happy Man.'

"And I think the reason it translated so much is because every single line in that song is directly personal to our relationship and our marriage," he continues. "And, you know, I think my fans looked at that and just saw it as very genuine, which it was.

"I think that’s the reason it was so successful.”