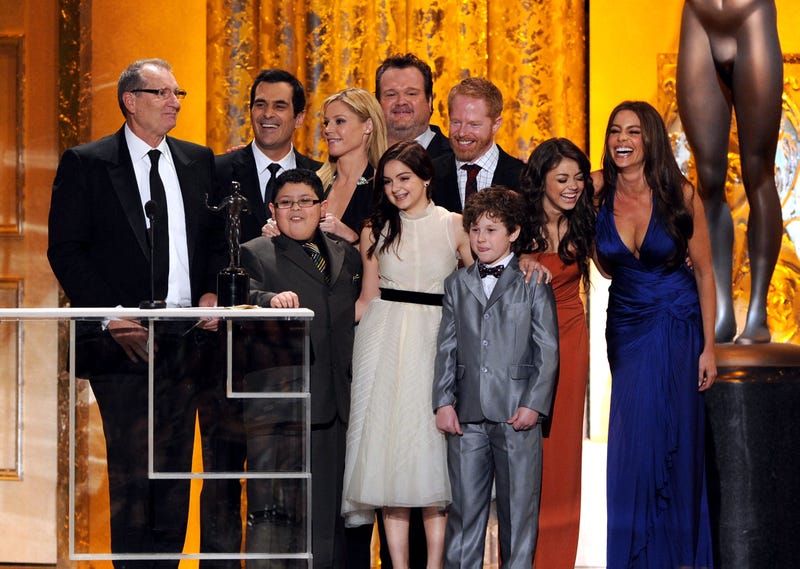 Reunited and it feels so good!

Sadly it wasn’t a show reboot that got several “Modern Family” cast members together, but a joyous occasion like a wedding definitely works!

According to photos shared on a couple of the ‘FM’ cast’s social media accounts they were gathered for the show’s co-creator Steve Levitan’s wedding. Jesse Tyler Ferguson, who played Mitchell on the show, captioned his fun post, “Congratulations @stevelevitan & @kristinamaria18 on your first 48 hours of marriage. Thank you for throwing a great party!”

Sofia Vergara, Gloria on the hit show, got in her feels to post a carousel of photos. “I love you guys!!!” she captioned with three red heart emojis rounding it out. A group photo of fellow cast members Ed O’Neill, Ferguson, Eric Stonestreet, Sarah Hyland, and Ty Burrell lead off the group of images.

Additional spots in Vergara’s carousel showed a group shot of Stonestreet, Burrell, and Ferguson and another of Ferguson and Stonestreet sharing a smooch on the dance floor.

In Stonestreet’s photo from the event, he made it known even though he hadn’t seen Vergara in some time, not much had changed.

“Haven’t seen @sofiavergara in two years and after sitting next to her for two minutes….she’s still got it,” he captioned the images of himself and the actress.

The cast has been making the rounds, recently reuniting at Hyland’s wedding on August 20 when she married Wells Adams.