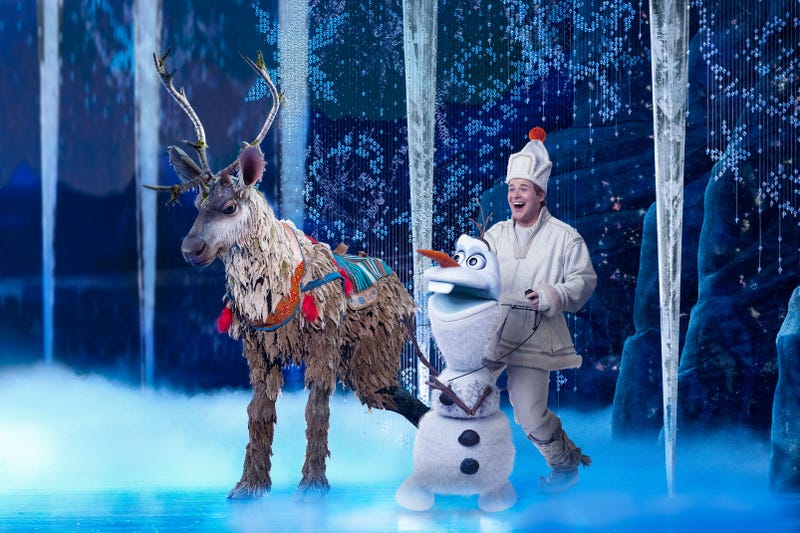 From the producer of The Lion King and Aladdin, Disney’s Frozen, the Tony®-nominated Best Musical, is currently playing an exclusive 10-week premiere engagement at the Cadillac Palace Theatre, with performances through January 22, 2022, only. Photo credit Broadway in Chicago
By Lisa Fielding

CHICAGO (WBBM NEWSRADIO) -- Elsa and Anna may be belting out "Let It Go" on stage at the Cadillac Palace Theatre this holiday, but Cary native Brae Singleton makes the magic happen backstage.

"I'm one of the stage managers on this tour. I'm a professional nomad on the road," he said, laughing.

Singleton majored in stage management from the Theater School at DePaul University.

"I had intended to go into sound and lights originally, then discovered stage management my senior year. I really love it and the organizational parts and the creative sides of it. My first professional show here in Chicago was Something Rotten. I also did Newsies here at the Palace," he said.

Singleton said 19 semi trucks worth of equipment, props and scenery were moved into the space.

"Our responsibility is maintaining the artistic integrity of the show. I have to be good at multitasking. Any time you see lights change on stage, any time you see scenery move, it's because the stage manager says, 'Go.' In this show, we say 'go' over 500 times a performance," he said. 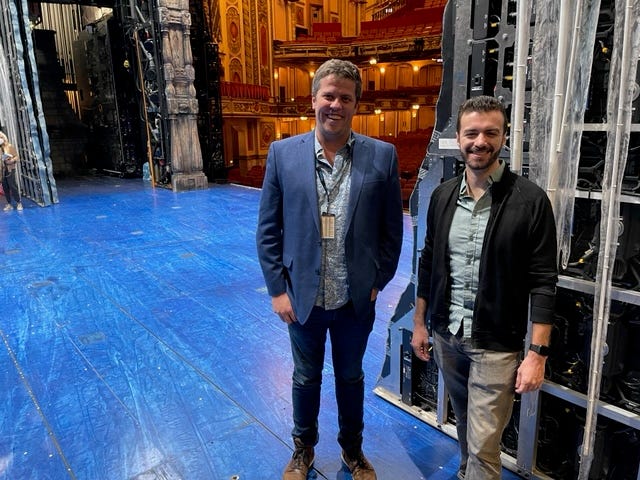 Mount Prospect's own Brian DeCaluwe is the Associate Company Manager. He said Disney’s Frozen is the biggest show he's ever worked on.

"Oh yeah, this is my biggest show. We wear a lot of hats. One of the main things I do is the logistics and how we work with each new venue," he said.

DeCaluwe said he's thrilled to be back home for the holidays.

"I remember as a kid coming to the Palace and seeing the show, seeing Beauty and the Beast, The Lion King and all that stuff. Now to come here and to be working on a show is like coming full circle," he said. 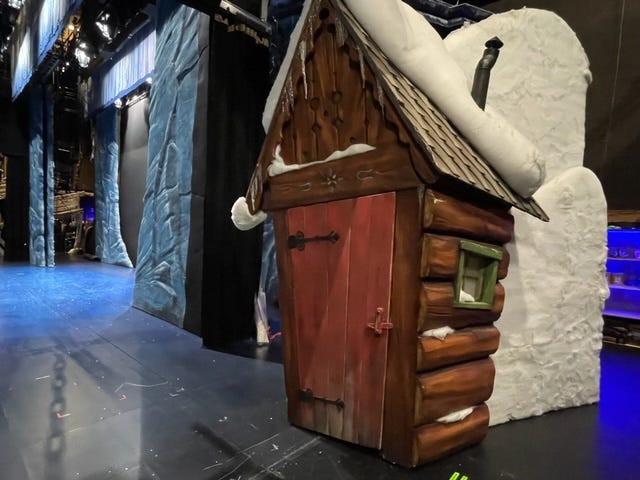 Singleton said 19 semis worth of equipment, props, and scenery were moved into the space. Photo credit WBBM Newsradio/Lisa Fielding

Both DeCaluwe and Singleton travel as part of the national tour. Singleton said the stage is the same, but backstage varies from city to city.

"We never know what we'll encounter and how we'll have to shift things around backstage from venue to venue," he said.

It takes 120 people to run the show every night. 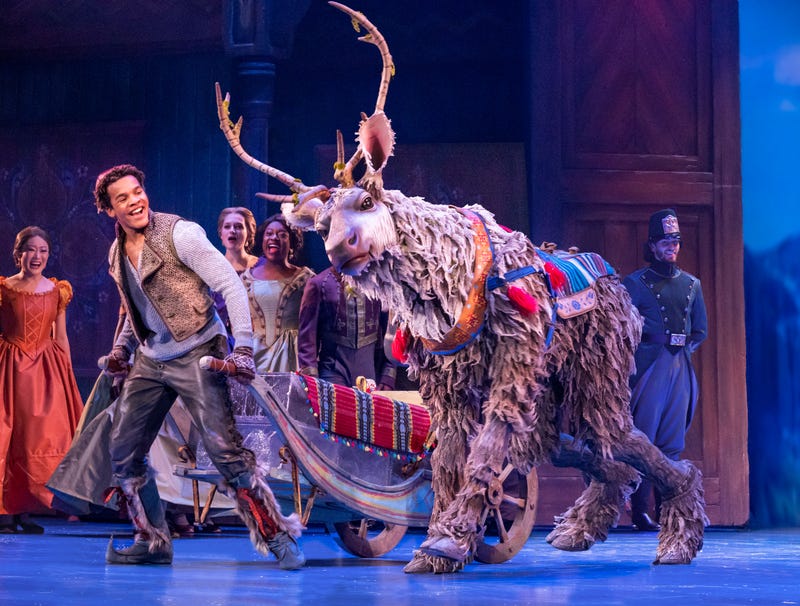 On stage, Mason Reeves plays "Kristoff". Reeves grew up in Arizona as an athlete and an actor. Photo credit Broadway in Chicago

On stage, Mason Reeves plays "Kristoff." Reeves grew up in Arizona as an athlete and an actor.

"My mom ran a youth theater and they always need boys for theater so she'd force me to do it," he said. "Eventually I phased out sports, because I loved the theater. It's a very inclusive space and everyone is accepted for who they are, so why wouldn't I want to be in this industry."

Reeves said he auditioned for "Kristoff" while he was still trying to finish college at the University of Michigan.

"I flew to New York. There were like 20 people from Disney watching my audition. It was like six hours of auditions. The next day, I got the call. It was crazy," Reeves recalled. "Then the pandemic happened." 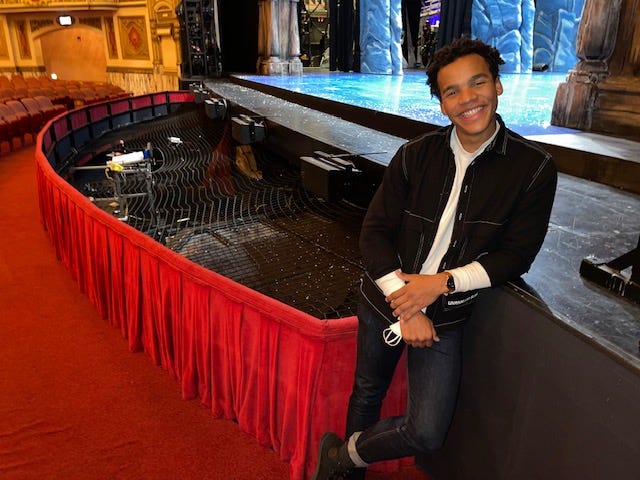 Reeves said he auditioned for "Kristoff" while he was still trying to finish college at the University of Michigan. Photo credit WBBM Newsradio/Lisa Fielding

After an 18-month shutdown, Reeves and the cast and crew returned to the stage on the national tour in Chicago on Nov. 21.

"My emotions were so unexpected. Seeing the audience and seeing people crying to be back in the theater made me cry. This is why I love doing this. I almost burned through my savings waiting to see if live theater would come back," he said. 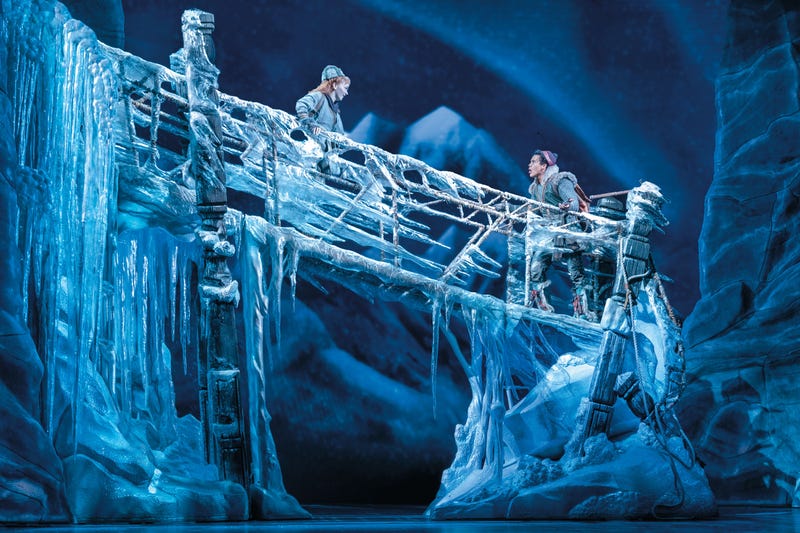 Reeves said he was relieved and happy to see that audiences actually wanted to return.

"There's nothing like a live performance. The audiences are enjoying it. It's nice being in Chicago where everyone is so grateful to be back. We are too," Reeves said. 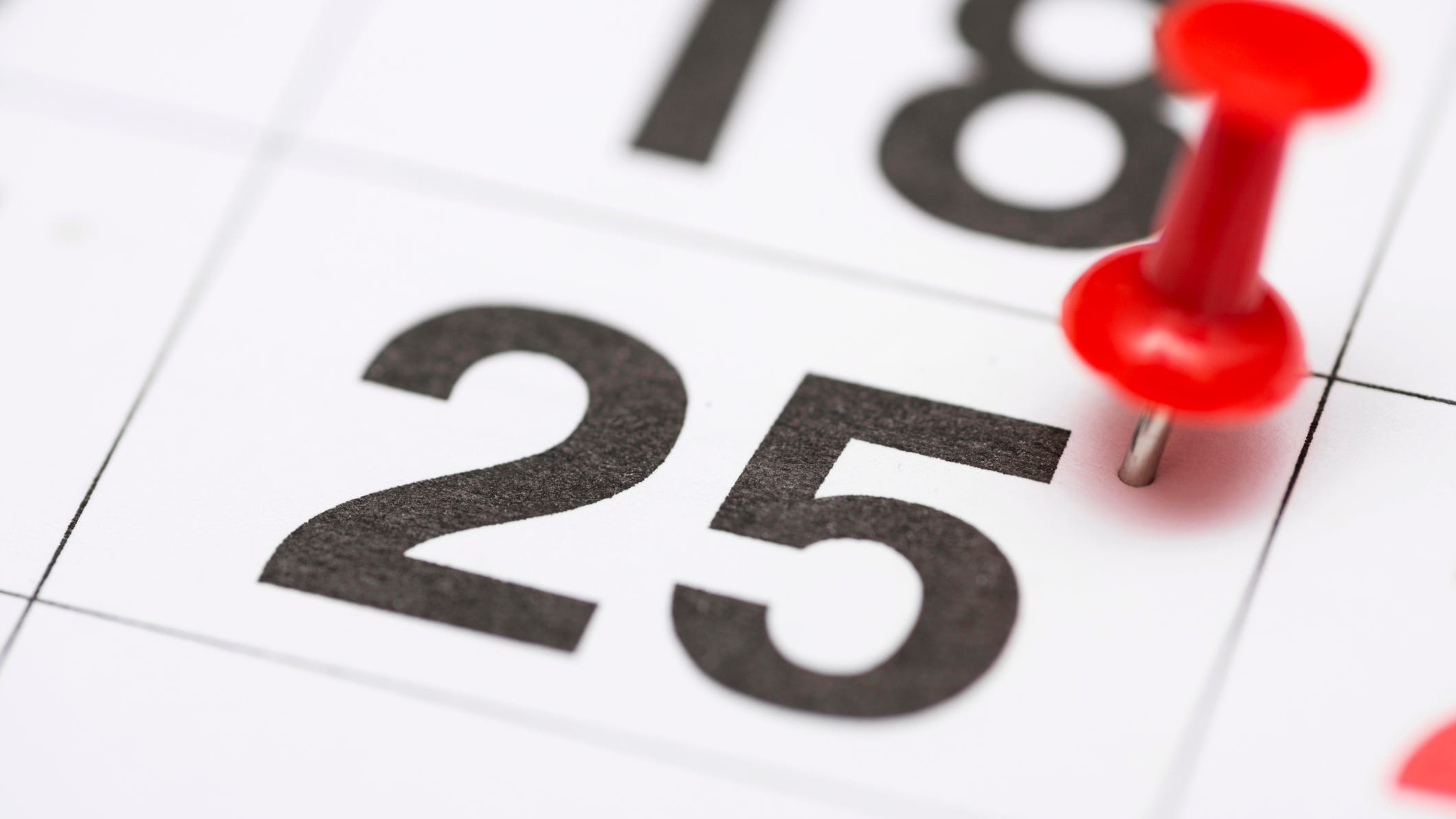 For Singleton, being home for the holidays is perfect timing, especially after a tough 2020 for the entertainment industry.

"It's always lovely playing in my hometown. Having friends and family come see your work is always amazing," said Singleton, who said he never tires of how the audience reacts.

"No matter how many times 'Let It Go' is sung, the audience always brings the house down. The Chicago audience is even better. Getting those reactions from the house is really my favorite part." 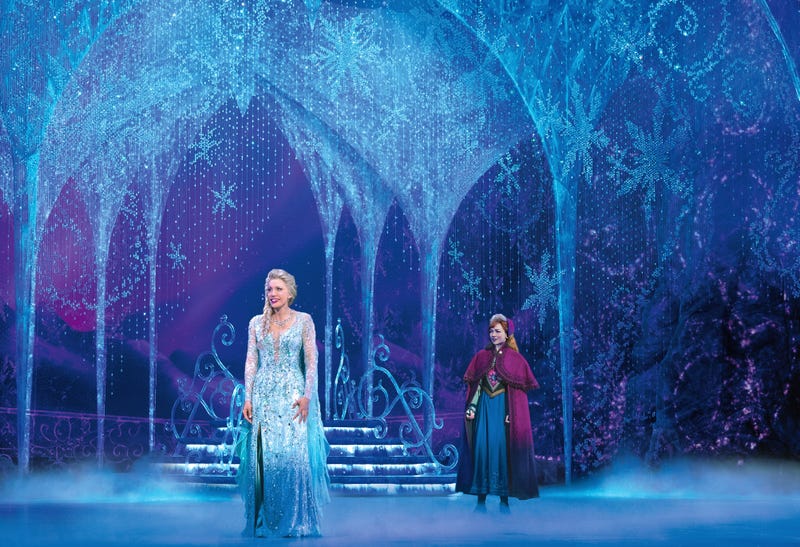 Frozen stars Caroline Bowman as “Elsa” and Caroline Innerbichler as “Anna,” the sisters at the heart of the joy-filled musical. Photo credit Broadway in Chicago

Disney’s Frozen plays at the Cadillac Palace Theater through Jan. 22.

Individual tickets for Disney’s Frozen are on sale now. Ticket prices range from $33 to $179, plus a select number of premium tickets are available. For more information or tickets, visit www.BroadwayInChicago.com

Listen below to the latest episode of Backstage Chicago, where
WBBM Newsradio's Lisa Fielding catches up with the cast and crew of Disney's: Frozen The Musical now playing at the Cadillac Palace Theater in Chicago.