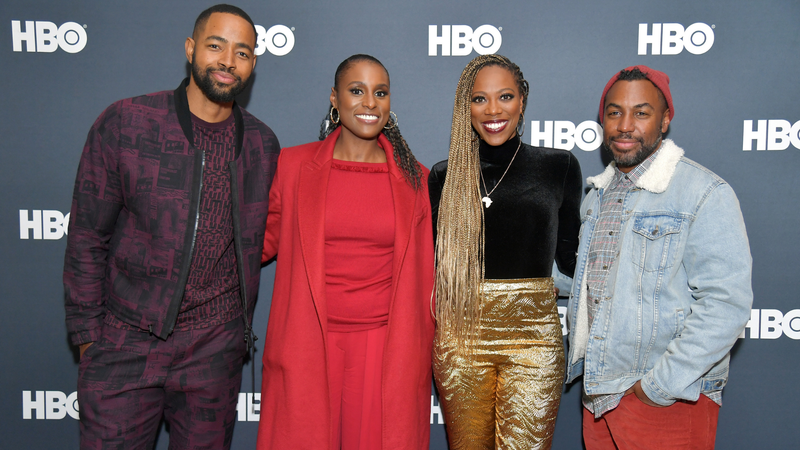 All good things must eventually come to an end, but still nothing could prepare us for the end of Insecure. The riveting comedy first aired on May 1, 2015 and six years later, the show and its cast/crew became cultural necessities— both on and off screen.

It was announced on January 13, 2021 that Insecure's fifth season would be its last. Though grateful that creator Issa Rae, showrunner Prentice Penny, and everyone involved would be able to end the show on their terms, fans still were shocked and upset by the news. Now, as each leading member— Jay Ellis, Natasha Rothwell, Yvonne Orji, Penny and Rae— all bid Insecure adieu, here are some highlights from their last days on set.

Orji posted a series of photos captioned, "how it started vs. how it's going." The photo set included her first days on set, being on a billboard, and her Emmy nomination. She thanked her cast mates, the team behind the magic and expressed, "I had so many 'firsts' on @insecurehbo, and I’m honored to be a part of a cultural phenomenon (even if I was #BlackTwitter’s arch nemesis last season [IYKYK])."

In an emotional video, Orji addressed Rae directly, "Issa, I owe so much to you. We all do. You changed the heck out of my life and like a Drake album, nothing will ever be the same. The role I'm most proud is not even Molly; it's being able to serve you. That's what I take so much pride in. I wanted to protect you because you literally were the head and heavy is the head that wears the crown. I was cast in this role to make sure you were good." Swipe through for the full video.

Actress/writer Natasha Rothwell who played beloved character, Kelli, shared a first day/last day photo set, captioned, "If I could go back in time and tell her what’s in store for her, I wouldn’t because she wouldn’t f***ing believe it..."

On Penny's last day, he shared a slew of memories via his Instagram stories, but summed everything in a lengthy caption. He thanked Rae for "trusting [him] with her baby." He also gave "all of [his] love and gratitude to Orji and Ellis for "making this little bitty show in Inglewood back in 2015 none of us had any idea, but we all fell in love with with each other immediately." He continued to thank more crew members and his family, but most of all, he thanked us. "And to the culture, just know everything I did was because I love you. Thank you and good night," he stated.