They also returned 2022 second-round pick Matthew Poitras to his junior team, the Guelph Storm of the Ontario Hockey League.

None of the cuts were surprising, as none were expected to have much of a chance to make the team out of camp. Merkulov and Poitras probably have the highest upside from this group, and both showed some promising flashes at times. Poitras is only 18, so there’s absolutely no rush there. Merkulov is about to turn 22, but his all-around game will need some seasoning in Providence before he becomes a serious lineup option for the Bruins.

You never want to set the bar too high when a team brings in an older player on a PTO (professional tryout), and no one did when Anton Stralman joined the Bruins late last week. It was very much a no-risk “we could use a little more depth on defense, so let’s just see what he has” situation.

A week in, though, the 36-year-old Stralman looks pretty good. And perhaps more significantly, he looks good while playing next to Hampus Lindholm, who is the Bruins’ No. 1 defenseman until Charlie McAvoy returns.

It’s only one preseason game and a few practices, but it’s enough to get us thinking about the possibility of that being a pairing the Bruins use in the regular season. I mean, Stralman did play 74 games last season and averaged 21:20 time on ice. And while his advanced stats aren't what they were in his prime, his expected goals numbers did actually rebound a little bit last year (+5 for the season, according to Evolving-Hockey). There does seem to be at least something left in the tank.

Neither Stralman nor Montgomery were ready to entertain the idea of Stralman opening the season on Lindholm’s right, but it’s clear that they do both feel like things are going pretty well so far.

“I think it was good for me,” Stralman said of playing with Lindholm. “He’s obviously a terrific player. Coming kind of from, growing up playing hockey the same way from an early age, I think that helped just to get into this game, kind of knowing his patters already a little bit, and communication too. It was good.”

“I can’t say I’m thinking about that as a pairing to start the year,” Montgomery said. “They’ve just been good, so I’ve left them together. We’ll start to move people around again after the day off [Thursday].”

Bruins could roll with 5-forward PP1

On Monday, Montgomery left the door open to using a five-forward power-play unit. On Tuesday, when the Bruins finally practiced special teams in earnest for the first time, the first power play he rolled out featured five forwards.

David Pastrnak and Patrice Bergeron posted up in their usual spots in the left circle and bumper, respectively. Taylor Hall took the opposite flank as Pastrnak, David Krejci manned the point, and Jake DeBrusk set up at the net-front.

It makes all the sense in the world. Two of the Bruins’ PP1 regulars from last season (Brad Marchand and Charlie McAvoy) are out until late November. Hall is a natural replacement for Marchand. Montgomery could try any of Lindholm, Mike Reilly or Jakub Zboril at the point, but Krejci has also played there before and is as good a distributor as anyone.

In the name of being less predictable on the power play -- remember, that was something Cam Neely and Don Sweeney emphasized after last season -- this alignment could maximize creativity and give the Bruins more options if opponents overload towards Pastrnak and/or Bergeron.

The one downside, of course, is not having a defenseman on the ice to defend a potential shorthanded rush against.

"It's just more, all five guys being conscientious of getting back above pucks," Montgomery said. "...We can't drift back. We have to come back hard."

We could get our first look at the five-forward power-play unit in game action on Saturday, because Montgomery said he plans to play most of the regulars in the Bruins’ matinee home game against the Flyers.

That will also be the first game action for the Hall-Krejci-Pastrnak and Zacha-Bergeron-DeBrusk lines, as DeBrusk is the only one of those six who played in one of the first two preseason games.

The Hall-Krejci-Pastrnak line is especially exciting. Everyone there has had chemistry with everyone else at one point or another, but they've never played all together. The ceiling for them is sky-high, and the Bruins will be counting on them to lead the way offensively at least until Marchand returns.

Asked on Wednesday how the line’s chemistry has been, Krejci kept his answer short and sweet: “Amazing.”

Our friend Evan Marinofsky tweeted out that BetOnline has set some over/unders on David Pastrnak for this season: 37.5 goals and 79.5 points.

Some preseason Bruins players over/under odds, according to @betonline_ag:

I am not much of a betting man, but I would hammer those overs. Pastrnak’s last two offseasons before this year were a mess due to hip surgery in 2020 and the tragic death of his newborn son last year. He has said that hockey wasn’t really a priority last year and that he needed to find “joy” again by playing in the World Championship in May.

Despite all that, Pastrnak had 40 goals and 77 points in 72 games last season. Oh, and he had Erik Haula as his center and battled a lingering injury late in the season.

Now he’s healthy, he’s in at least a little better head space, and he’s upgrading to Krejci at center. Yeah, you could add 10 to those 37.5 and 79.5 numbers and I might still take the over.

Greer gets a promotion

A.J. Greer was the star of Tuesday’s preseason win, with two goals and a game-high seven hits, and his efforts earned him a promotion to the third line in Wednesday’s practice, with Trent Frederic getting moved down. 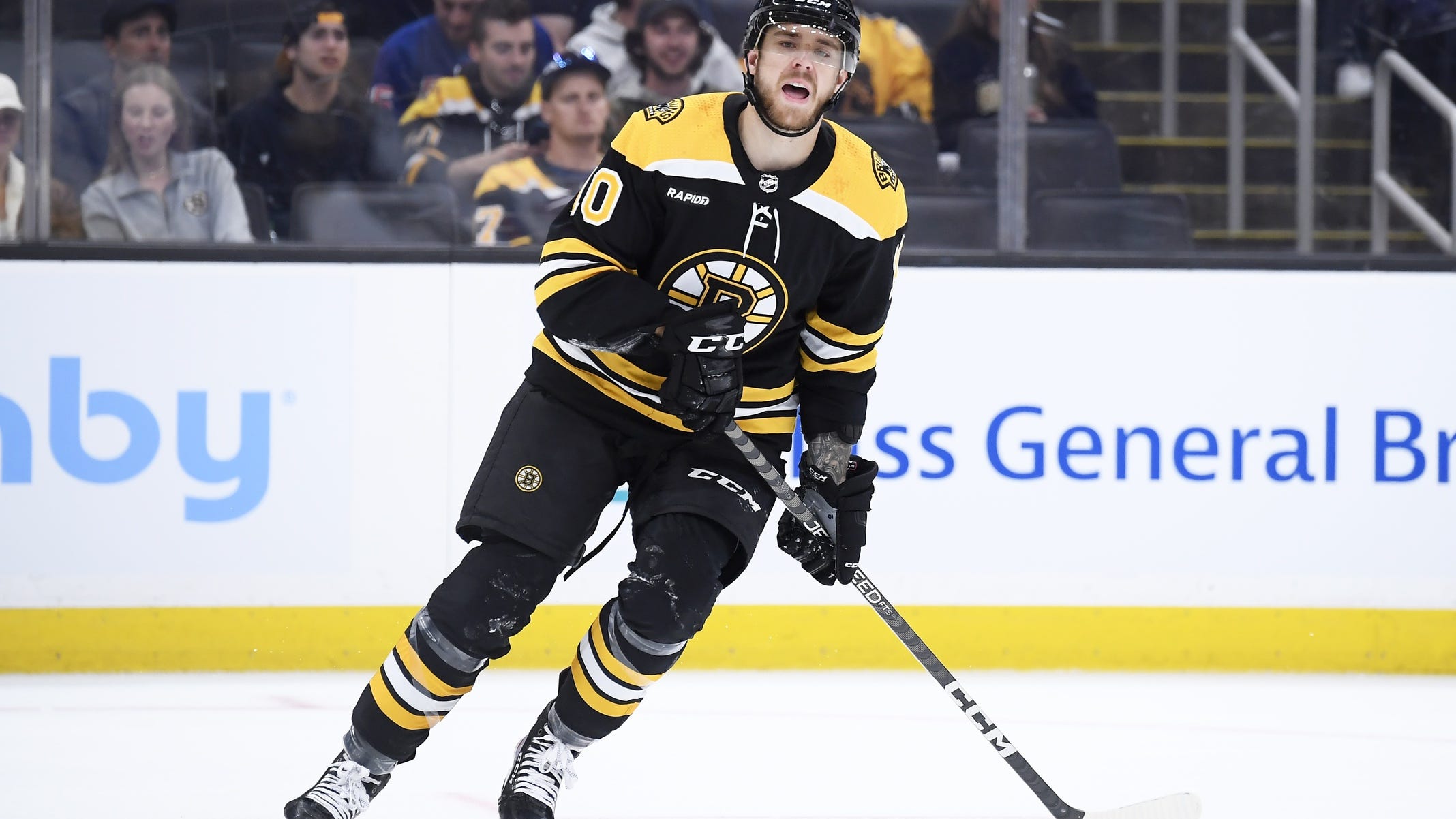 Whether Montgomery takes a longer look at Greer with Charlie Coyle and Craig Smith remains to be seen, but it’s hard to argue against the idea.

Frederic had some good games with those two last year, but it’s not like he’s run away with the job and fully established himself as an NHL third-liner. That third-line left wing spot is and should be up for grabs, at least until Marchand returns and someone (presumably Pavel Zacha) gets moved down from the current top six. Greer has certainly made a case to at least get a look there.

Mike Reilly looks like someone who is going to enjoy having more freedom to jump into the offense under Montgomery’s system.

He was all over the place Tuesday night and helped create several good chances by activating in the offensive zone, carrying the puck down low and shifting the point of attack. He also tied for the team lead with seven shot attempts and five shots on goal.

It wasn’t a perfect game by any means. Reilly also took a silly slashing penalty and was unable to tie up Alexis Lafreniere’s stick on the Rangers’ second goal. So, clearly there’s still work to do.

But the offensive engagement looked like exactly the kind of thing Montgomery wants more of from the Bruins’ blue-liners. And let’s not forget that Reilly led all NHL defensemen in 5-on-5 assists per 60 minutes just two years ago (yes, seriously).

“Yeah, he was joining the rush well,” Montgomery said of Reilly Tuesday night. “He was implementing some of the things that we want. He was very active in the offensive zone, keeping pucks alive. So, those things were really good by him.”

Many seem to be assuming that Reilly will end up as the odd man out and possibly traded as a salary dump once McAvoy and Grzelcyk return, but what if he turns out to be a really good fit for what Montgomery wants to do? We probably shouldn’t be dismissing that possibility.

Wagner battling for a job once again

Last year, Chris Wagner didn’t make the Bruins out of camp and wound up spending nearly the entire season in Providence. Understandably, it wasn’t what the 31-year-old Walpole native wanted, and isn’t something he wants to go through again this year.

It very well could happen again, though. It’s a crowded field battling for fourth-line jobs. Wagner is certainly part of that field, but there are no guarantees. Some of the factors that led to his demotion last year are still in play.

The Bruins can save $1.1 million against the cap by sending him to Providence. There are other forwards who would be more likely to be claimed on waivers that the Bruins may not want to risk losing, namely A.J. Greer, Jack Studnicka and Oskar Steen. And Wagner just simply may not be one of the Bruins’ 13 best forwards at this point.

That last part is the one he’s trying to prove wrong, though. Wagner said he worked on improving his skating this summer. He also regained some confidence when he got called up for the regular-season finale last year and played his way into a spot on the playoff roster.

“I tried to get faster this summer, test well, which I did,” Wagner said. “Other than that, just focus on the day-to-day and worry about myself, stuff I can control. If I’m worrying about stuff I can’t, you won’t sleep well at night.

“…It’s more of a, ‘What do I have to lose?’ kind of thing. Like I said before, I’m proud of myself that I was able to come back and play in the playoffs, play decent too. I still think I can play in this league, but time will tell.”

And if he does get sent down again? Well, he’ll handle it like a professional again and try to earn his way back.

“Would I be able to handle it? As opposed to what? That’s my job, so I’ll show up,” Wagner said.