Since we’re right around midseason for pretty much every league, we figured it would be a good time to check in some of the Bruins’ top prospects and how their seasons are going.

The Bruins’ 2021 first-round pick hasn’t played a game since Dec. 11. He was on Sweden’s World Junior team, but missed the first two games due to injury. Before he even had a chance to potentially return, the rest of the tournament got canceled because of COVID-19.

Lysell made a trip home to Sweden after World Juniors and has not yet returned to action for the Vancouver Giants in the WHL. He is expected to do so this weekend, according to Mark Divver.

Before leaving for World Juniors, Lysell was really starting to heat up. After being just under a point-per-game player in his first 15 games with Vancouver, the right wing had 14 points (7 goals, 7 assists) in his last eight, helping the Giants go 5-3 in that stretch.

That brought Lysell up to 28 points (11 goals, 17 assists) in 23 games this season, putting him third on the team in points and second in points per game.

The Giants have clearly missed him, as they’ve gone 2-8 over the last month without him. They and the Bruins will hope Lysell can pick up where he left off upon returning.

Fabian Lysell will be fun to watch in Boston.

After not making the Bruins’ NHL roster despite a strong training camp and preseason, Studnicka got off to a very slow start in Providence, registering just four points in his first nine games while being a minus-5.

He has been better over the last month and a half, though, posting 12 points (3 points, 9 assists) in his last 11 games with a plus-5 rating. That is much more in line with his production in Providence two years ago, when he had 49 points in 60 games.

Studnicka has gotten five games in Boston this season, but has put up just one point. His path back to the NHL remains uncertain. The way the Bruins’ new-look lines have played this month -- with Erik Haula centering the second line, Charlie Coyle the third and Tomas Nosek the fourth -- has solidified the center position for the time being. Oskar Steen’s emergence and Curtis Lazar’s strong play of late has done the same at right wing.

What the Bruins need and want from Studnicka is for him to just keep improving in Providence and put himself in a better position to be able to stick in the NHL and run with a job whenever he does get called up again.

Appearing on The Skate Podcast on Jan. 6, P-Bruins expert Mark Divver had this to say about Studnicka:

“I don’t know if he’s ready. He’s been, as [Bruce Cassidy] mentioned recently, in and out from a consistency standpoint. I think that’s a fair assessment. … I think his confidence is not necessarily in a good place right now, because he’s had opportunities -- short opportunities -- and they haven’t really worked out.”

(Listen to the full conversation about Studnicka beginning at the 9:20 mark below.)

Lohrei was widely considered a reach when the Bruins drafted him in the second round in 2020, but he now looks like anything but.

After being named the USHL Defenseman of the Year last season, the 6-foot-4 Lohrei has 19 points (2 goals, 17 assists) in 24 games as a freshman at Ohio State this season. He is tied for second in scoring on a 16-7-1 Buckeyes team that could be on its way to an NCAA tournament berth.

Lohrei is tied for sixth nationally among defensemen in points and is second among freshman defensemen, behind only 2021 fourth overall pick Luke Hughes of Michigan.

Now, it does need to be noted that Lohrei is not a true freshman. He turned 21 on Monday, putting him on the older side of freshman college players in general, and especially of drafted college freshmen.

Still, he is also playing and producing at a higher level than most freshman defensemen, which is what you’d hope to see if you’re the Bruins. Lohrei certainly looks like one of the organization’s top prospects at this point, and if he keeps developing at this rate he almost certainly won’t spend four years at Ohio State.

Ridiculous pass from Mason Lohrei, No. 6 in white, off the rush for his third or the game. Lohrei jumps into the rush, gets on a partial break, holds the stick out and delivers a backhand, no-look pass through a defender. #NHLBruins pic.twitter.com/ioqG3u4M82

The loaded Michigan Wolverines have one of the best offenses in college hockey, but Beecher -- the Bruins’ first-round pick in 2019 -- hasn't been a huge part of the fireworks, as he has six points (4 goals, 2 assists) in 17 games this season.

That’s an even lower rate of production than his first two seasons at Michigan, which were already underwhelming from an offensive perspective.

Beecher’s third-line center role certainly has value to the Wolverines, and it may help him develop the kind of defensive game that could earn him a spot on the Bruins’ fourth line someday. But at this point, it’s hard to envision Beecher improving enough offensively to be a top-six forward for Boston.

It is worth noting that Beecher will get a chance to play higher up in the lineup and in more offensive situations next month, as first-liners Matty Beniers and Brendan Brisson are both heading to the Olympics with Team USA. Kent Johnson is expected to be named to Canada’s team, too.

Harrison was one of the many players who became even more of a wild card for the 2021 draft after the 2020-21 OHL season was canceled.

He had a solid but short stint in Finland last year, but is now back in the OHL with the Oshawa Generals this season. While Harrison’s numbers aren’t quite at the top of the OHL points leaderboard, the third-round pick is having a strong season.

A 6-foot-2 center, Harrison is averaging over a point per game with 16 goals and 13 assists in 27 games. He is second in scoring on an Oshawa team that is currently middle of the pack in the OHL’s Eastern Conference.

Harrison had 37 points in 58 games two years ago with Oshawa, so this is the kind of jump in production you’d hope to see from the now-18-year-old. The Athletic’s Scott Wheeler recently ranked Harrison as the Bruins’ No. 4 prospect, ahead of Beecher and behind only Lysell, Studnicka and Lohrei. (Wheeler, by the way, ranked the Bruins' prospect pool as a whole 27th out of 32 NHL teams.)

What. A. Snipe. 🎯@NHLBruins prospect Brett Harrison (@Bretth4488) wires his 16th goal of the year, giving the @Oshawa_Generals the early lead at home against the Wolves 📽️ pic.twitter.com/oGmxxNtJCc

Kuntar, the Bruins’ 2020 third-round pick, has moved up from a mostly third-line role at Boston College as a freshman last year to a mostly second-line role this season.

His production has ticked up with it, as he now has 13 points (5 goals, 8 assists) in 21 games after having 10 in 23 last year. He did just have an eight-game goalless drought, though, which he finally snapped on Saturday against New Hampshire with a good, greasy goal at the net-front.

Fifth of the year for @TrevorKuntar. Things are getting interesting... pic.twitter.com/qIWeXxutXJ

That’s basically Kuntar’s bread and butter -- get to dirty areas, battle, be physical. Those are welcome attributes on any team.

The question with Kuntar is whether there’s another level for his offense. He showed some promise in 2019-20 as the third-leading goal-scorer in the USHL and earned high marks for his shot. While he’s shooting a ton this season -- he leads BC with 72 shots on goal -- it’s not translating to many goals.

If Kuntar can start finishing more of his chances, his outlook for the future will get brighter.

The seventh round is usually the land of borderline non-prospects, but Gallagher -- selected by the Bruins in the seventh round this past summer -- is worth keeping an eye on.

He set the U.S. National Team Development Program record for goals by a defenseman, scoring 25 over the past two seasons. Now a freshman at Boston University, Gallagher is off to a pretty good start at the college level too, recording 11 points (4 goals, 7 assists) in 21 games while playing solid defense.

Gallagher assisted on all three BU goals in a 3-3 tie against BC just before winter break, then scored a goal in back-to-back wins over Arizona State just after.

Barring a big jump, he’s probably a four-year player at BU, but that’s just fine if you’re the Bruins. Matt Grzelcyk spent four years there, too, and didn’t really make his big jump (especially offensively) until his junior year.

After putting up 19 points in 23 AHL games last season, 2018 third-round pick Jakub Lauko’s production with Providence has dropped to 13 points (3 goals, 10 assists) in 27 games this season. Fellow forward and 2018 selection Curtis Hall (a fourth-round pick) has one goal and three assists in 23 games with the P-Bruins.

2019 third-round pick Quinn Olson has 15 points (4 goals, 11 assists) in 22 games as a junior at Minnesota-Duluth, tying him for the team lead on a squad that lacks offensive stars but is solid enough all-around to once again be on its way to an NCAA tournament berth.

Woburn native and 2020 sixth-round pick Riley Duran has five goals and eight assists in 25 games as a freshman at Providence College. He’s playing a middle-six role on a Friars team with NCAA tournament aspirations.

2019 seventh-round pick Jake Schmaltz is another forward playing an important role on a team likely headed to NCAAs. As a 20-year-old freshman at North Dakota, he’s currently fifth on the team in scoring with 14 points (6 goals, 8 assists) in 21 games.

2021 fourth-round pick Philip Svedeback is 5-3-2 with the Dubuque Fighting Saints in his first season in the USHL (and first in North America), but his individual numbers (.892 save percentage, 3.61 goals-against average) don’t exactly jump off the page. He’s committed to Providence College for next season.

2021 fifth-round pick Oskar Jellvik is second in scoring (30 points in 26 games) on a Djurgardens team that is currently third in the northern division of Sweden’s top junior league. Jellvik committed to Boston College last month.

Defenseman Ryan Mast, the Bruins’ 2021 sixth-round pick, has six goals and 10 assists in 29 games for the OHL’s Sarnia Sting. After not playing last year because of the OHL’s COVID situation, that’s a notable jump in offensive production from his one goal and 10 assists in 58 games the year before.

Center Andre Gasseau, the Bruins’ other seventh-round pick in 2021 along with Gallagher, has 10 goals and seven assists in 28 games with the Fargo Force in the USHL, putting him fourth on the team in scoring. Like Jellvik, he’s committed to BC. 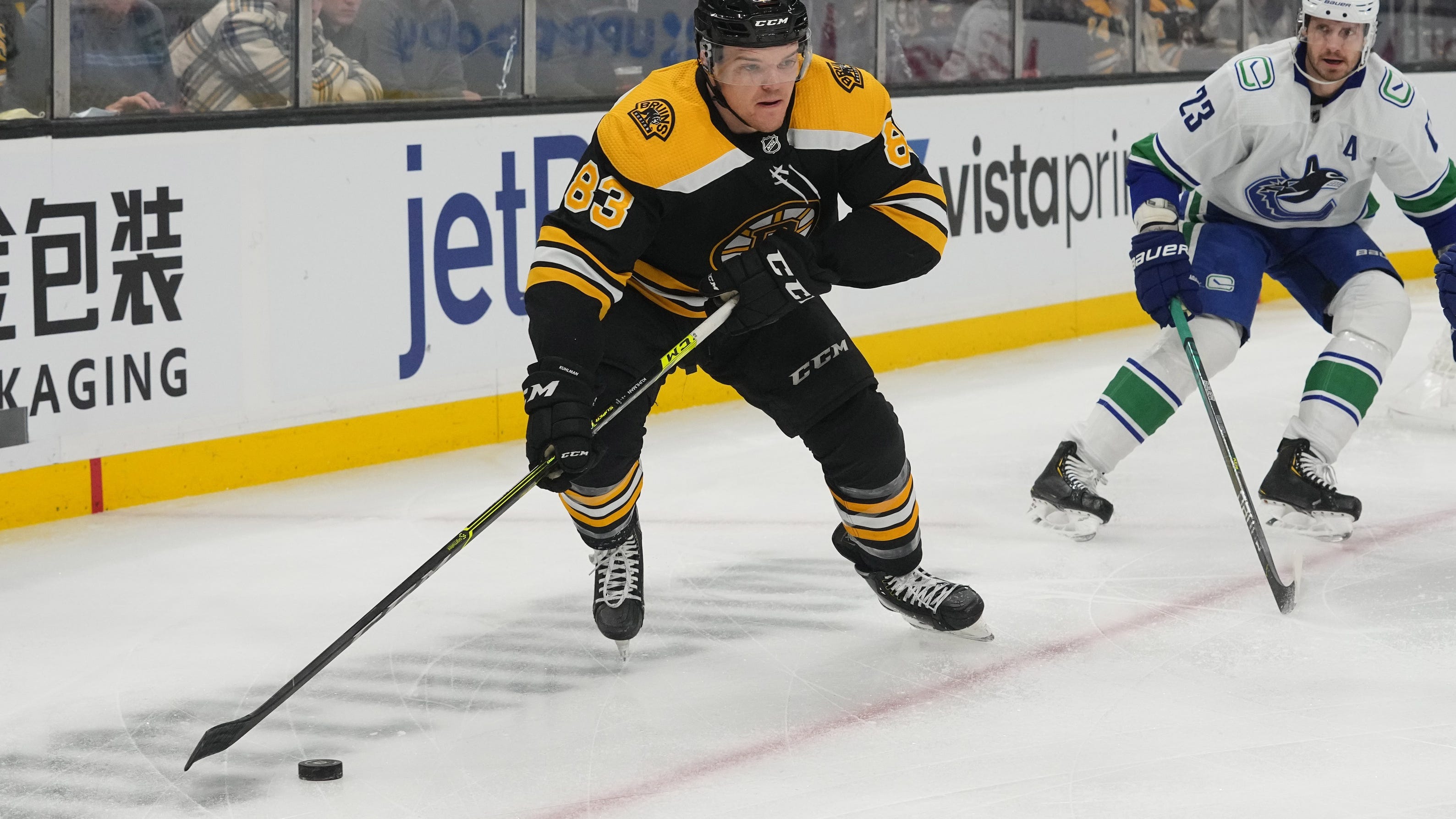