The network released a statement on Wednesday that announced it was unable to reach a contract agreement with the 34-year-old journalist.

Taylor is expected to join NBC and begin working during their Olympic coverage, per the New York Post.

Taylor’s departure from ESPN comes weeks after a year-old audio tape of colleague Rachel Nichols was leaked in which she complained that ESPN executives were going to hire Taylor as the host of “NBA Countdown” over her due to their “crappy longtime record on diversity.”

The comments were a point of contention for Taylor, and many other employees at ESPN, as the network never disciplined her. After the audio was leaked, ESPN pulled Nichols as its sideline reporter for the NBA Finals but she continued to do her show, “The Jump,” where she issued a public apology to Taylor.

The Nichols tape also leaked at a point where Taylor’s contract negotiations with ESPN were heating up and soon became public, with reports of Taylor rejecting ESPN’s offers.

Per the Post, Taylor could be in line to replace Mike Tirico as the host of “Football Night in America,” — its Sunday night pregame show — in 2022 when Tirico replaces Al Michaels in the booth.

ESPN’s statement included comments from both its president, Jimmy Pitaro, and Taylor.

“Maria’s remarkable success speaks directly to her abilities and her work ethic,” Pitaro said. “There is no doubt we will miss Maria, but we remain determined to continue to build a deep and skilled talent roster that thoroughly reflects the athletes we cover and the fans we serve. While she chose to pursue a new opportunity, we are proud of the work we’ve done together.”

“So thankful to Jimmy and all of my great teammates and friends at the SEC Network, College GameDay, Women’s and Men’s college basketball, and the NBA Countdown family,” Taylor said. “The people who believed in me, encouraged me, pushed me, and lifted me up. Words are inadequate to express my boundless appreciation, and I hope to make them proud.” 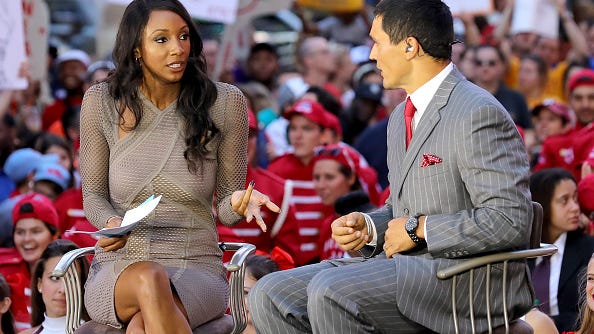