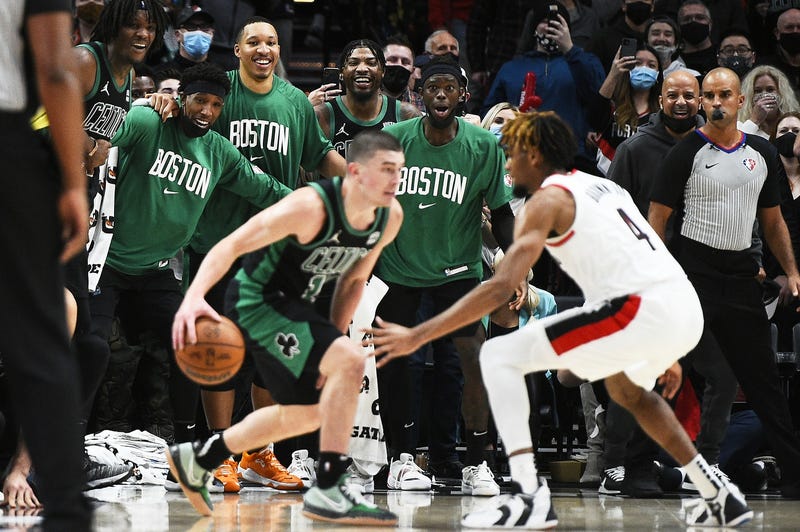 Sure, maybe things got a little bit out of control at the tail-end of the Celtics' 145-117 blowout over Portland, with the bench exhorting Payton Pritchard to keep shooting one three-pointer after another.

But, you know what, sometimes it is what it is. And what it was was a chance for hometown fans to once again get a glimpse of their hometown hero. Oh, and along the way the Celtics just happened to get a reminder about a potential weapon they have had sitting on the bench.

During a three-minute stretch at the conclusion of Saturday night's Celtics win, Pritchard netted 16 - that's SIXTEEEN - points in front of a crowd that at least partly consisted of those who watched him play at nearby West Linn High.

To put this in context, Pritchard scored three more points in this three minutes than he finished with for the entire month of November.

PP PUTTING ON A SHOW 🔥 pic.twitter.com/qn9X1V7lhD

In case you forgot, this was the kind of performance that led many to believe the former first-round pick's career trajectory was only going to skyrocket after a solid rookie season. Instead, Pritchard's first few months have been littered with garbage time and Coach's-DNP's.

After averaging 19.3 minutes per game last season, this time around it has dropped to 9.3. The shooting percentage has plummeted from 44 percent to 27.1 percent. Pritchard came into Portland not having played in three of the four previous games, with the latest win representing just the second time this season he has totaled as many as 18 minutes.

"For me, obviously this has been a new experience from last year,” Pritchard told reporters. “Some games you don’t play and then sometimes you get in there. So for me, it’s just finding that confidence to always stay ready, and that happens with my work and my daily habits."

And, yes, Ime Udoka did apologize to Portland coach Chauncey Billups for the Pritchard-induced celebrations ...

"I did apologize to Chauncey [Billups] at the end of the game for that...didn't mean for it to get out of hand like that."

Ime Udoka on the final seconds of the game vs. Portland pic.twitter.com/aH9sKfYCVt

In the end, however, there should be a celebration. Score or no score, no matter the location, this was the most important piece of the puzzle: Celtics fans got to see the return of Payton Pritchard.

"This one," said Celtics guard Dennis Schroder, "was special."