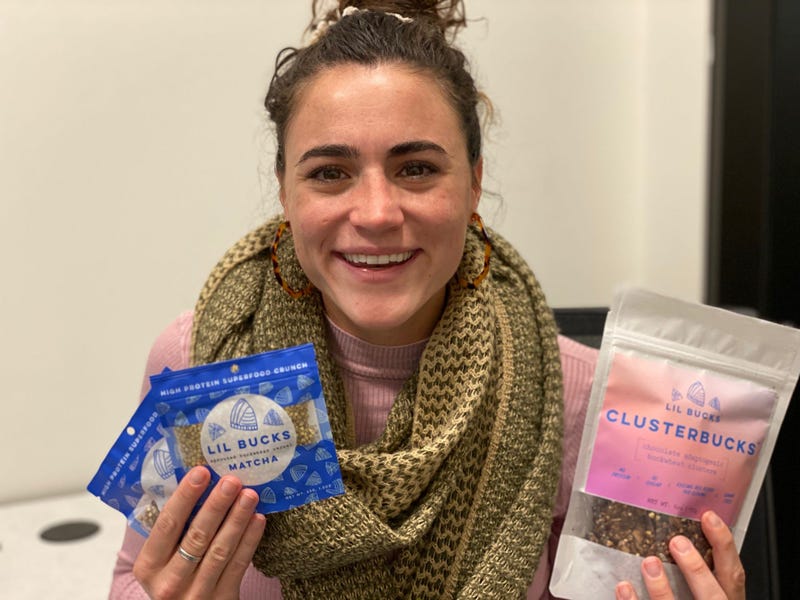 (WBBM NEWSRADIO) -- It was about three years ago when Emily Griffith's life changed.

"I used to live in Sydney, Australia, and that's where I had what I call a life-changing acai bowl."

It’s like a fruit smoothie in a bowl, usually topped with granola.

"The reason I loved this one so much was because they used sprouted buckwheat instead of granola in the bowl,” Griffith said.

“On top of just the crunch, I felt really amazing after eating it, so much that I went back to the cafe and bugged them about what these little seeds were."

When she moved back to Chicago, she searched for sprouted buckwheat. She couldn’t find it, so she decided to make it herself and called it “Lil Bucks.”

Griffith took some classes and launched Lil Bucks in April 2018. Then, the 27-year-old wondered: Who's her target customer?

"I did a big deep dive just to not assume it was myself. But after doing a deep dive, it basically is myself. Our customers are primarily female, like 25 to 35, love being active, being outdoors."

#regram from another amazing #smallbusiness @rootedlifefoods ! One of the questions I've seen us get during our #NothingSmallAboutUs week is: "How often do you eat your own product?" ➡ Answer: EVERY DAY!!!!!! I have probably eaten sprouted buckwheat nearly every day since I first discovered it being used as a granola in Australia over 3 years ago. My friend asked me the other day (s/o @ellenhmiller) if I ever get sick of it and I am not kidding I DO NOT! The crunch is addictive and I LOVE the way it makes me feel. Plant-based protein, eating mostly grain-free, magnesium and fiber are all v important to me, as well as texture (always been a crunchy PB person), so sprouted buckwheat really hits the nail on the head. Speaking of amazing texture, the @rootedlifefoods adaptogenic peanut butter is PERFECTION. Have you tried? Ashleigh launched earlier this year and has taken the PB world by storm!!! And they just started selling minis. A great idea for the holiday season and for stocking stuffers. Who isn't obsessed with mini foods?! -- #smallbusinesssaturday #shopsmall @amazifoods @revivalfoodco @swapples @eatsnowmonkey @_noshbar @kweenandco @tigerbutterco Do you eat your product every day?? I bet!!

And it all comes back to that moment in Sydney.

"I'll never forget having these seeds and totally freaking out. I feel like I was skipping back to the beach. I probably wasn't actually skipping, but in my mind I was."