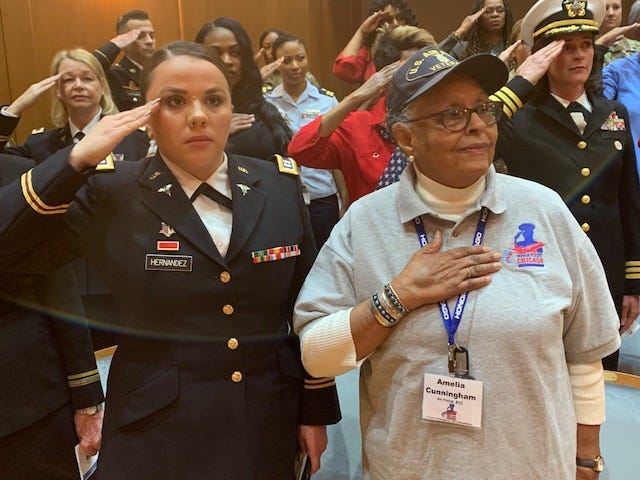 CHICAGO (WBBM NEWSRADIO) -- Women soldiers have been serving in the military since the Revolutionary War, but often times, their contributions are forgotten.

"We couldn't be more excited to recognize the service and sacrifice of our women veterans," said John Ptak, President, Honor Flight Chicago.

"Since our inception in 2008, Honor Flight Chicago has completed 95 flights bringing 8,728 senior war heroes to Washington, D.C. to visit the war memorials in their honor, but fewer of 200 of these veterans have been women though."

That will change on Oct. 7 when 100 female veterans from Illinois will board the first, all-women Honor Flight in Chicago.

"As we learn more about the reasons why women veterans have historically relinquished their rightful spots of honor to their male counterparts, we became increasingly convinced of the vital importance of getting Operation HerStory off the ground," Ptak said.

Dr. Constance Edwards was a nurse in Vietnam, but she said when she returned home, she wasn't treated like a veteran.

"I did an article with the Daily Herald and mentioned there should be an all women's honor flight. Next thing I know it was the headline in the article. We found that there aren't a lot of women on those fights," said Ginny Narsete, Operation HerStory chairperson,Vietnam veteran.

"Isn't it time women come out of the shadows and become visible and accept honor and recognition?" Narsete said.

The all-expense-paid Operation HerStory flight day will include visits to landmarks that are of particular significance to women veterans, including the Women’s Memorial, WAC museum and Vietnam Women’s Memorial.

"This trip is one day, but the experience will be life changing," Ptak said.

Those interested in learning more or securing an Operation HerStory veteran flight application can visit www.OperationHerStory.org, email info@operationherstory.org, or call (513) 813-7808.