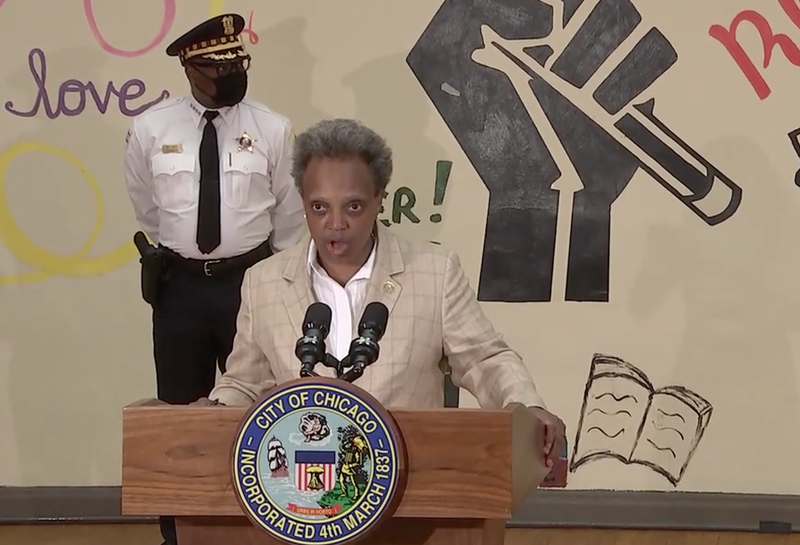 "Now the world has changed a lot since those documents were first drafted, and that Declaration of Independence from the ternary of King George was read out loud to the world, but we still must remember, we have a long way to go to full embrace and embody the spirit of what makes the United States different. The spirit of making sure that we are a government that is representative of the will of the people. The spirit of making sure that we focus on the life, liberty, and pursuit of happiness of ALL of our residents, not just a chosen few."

The mayor said those are some of the things she is thinking about, as she reflects upon what the Fourth of July means in this world, in this time, "were we have experience so much as a community, as a state, and as a country."

She said many traditions have been canceled or moved online, due to the COVID-19 pandemic; however, she said, Chicagoans will still be out relaxing and having fun.

"And we will be doing everything that we can to ensure that happens safely and responsibly..." Lightfoot said. "This has got to be an all-hands-on-deck approach to community. It is not just on the police department, not just on the fire department, not just on elected officials. All of us have to embrace our notion of community and step up and think about what we can do, each of us, in our own way to make our communities safe and healthy and vibrant.

"We can't give that responsibility to anyone else. If we do that, we are giving up our power over our own lives, over our own communities to someone else. It's on each of us to step up and own this space in this moment, and I hope that we do that."

The mayor said Millennium Park, Maggie Daley Park, and most neighborhood parks will be open with safe social distancing and face coverings. Meanwhile, the Lakefront Trail, Riverwalk, and 606 will continue to be open as long as people "keep it moving."

She said Chicago beaches will remain closed throughout the holiday weekend.

"Every single year, we lose so many people who drown in Lake Michigan. And this year, we have no lifeguards on the beaches, because the beaches are closed. Please, don't be foolish. The lake is dangerous. It always is. It is deep. It has riptides and currents underneath the water that you may not see when it looks calm and placid on top. Be smart. Do not go into the lake. There's no lifeguards. We don't want you to be another drowning casualty in our city," Lightfoot said.

To help the city reinforce these guidelines along the lakefront and in parks, CPD's Marine Unit will be patrolling the area to keep residents in compliance, the mayor said.