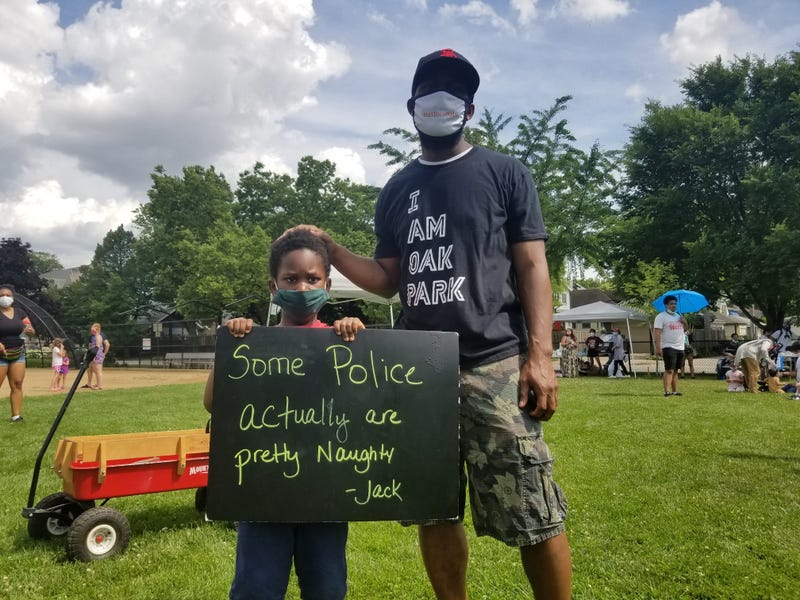 OAK PARK, Ill. (WBBM NEWSRADIO) -- Hundreds of children and their families gathered in Oak Park Saturday afternoon for a Black Lives Matter youth march and rally to spread hope and education to the next generation.

The youth-led rally and protest, which included a march around Fox Park at 624 S. Oak Park Ave, was organized by Oak Park resident Kahari Reed, who recently welcomed twins. He said the current racial issues in the world fill him with fear for how his two Black sons will be treated and wanted to hold a peaceful rally to focus on education, civic engagement and empower young people to fight for racial justice.

State Rep. LaShawn K. Ford also joined the event, which included speakers and a post-march educational gathering where children assembled into small groups to discuss current social issues and share what they learned with their peers and adults.

Jackson Price, who wrote a sign that read, "Some police are actually pretty naughty," said he attended the protest with his father to stand up for Black lives.

"I don't like what is happening and Black people aren't treated right," Price said.

Sydney Jackson, community organizer and student at the University of Chicago and Revolutionary Oak Park Youth Action League (ROYAL) were also part of the organizing efforts.