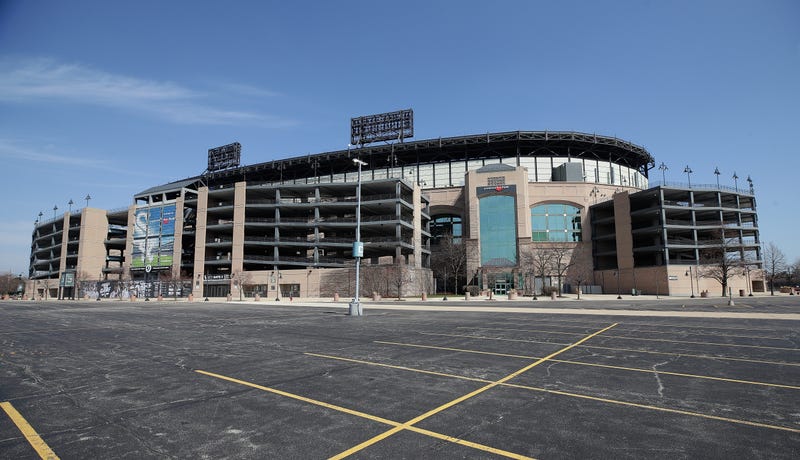 Photo credit Empty Guaranteed Rate Field on what was to be Opening Day. (Photo by Jonathan Daniel/Getty Images)
By Rick Gregg, WBBM Newsradio 780 AM & 105.9 FM

CHICAGO (WBBM NEWSRADIO) -- The question had to be asked.

“Why,” I pressed Out Of The Park Developments Chief Operating Officer Richard Grisham, “do you hate our teams?”

I had just run a full simulation of the baseball season-that-so-far-isn’t, using the computer game Out ot the Park Baseball 21. It did not go well for the Chicago Cubs or the White Sox.

“Well,” Grisham replied, chuckling, “we must hate a lot of teams.

“Because a couple of nights in a row, I’ve gone on our Twitch channel, and just had a little fun simulating the Mets season. I’m a big Mets fan.  And they finished well below .500, and well out of first place, both times. So I don’t have an answer for you, because I’m still trying to figure out why it hates the Mets.”

His Mets missed the playoffs in the simulation I ran, too, but so did both Chicago teams. Not that this run-through was in any way scientific; it was just one roll of the dice, as it were. But Out of the Park does have a pretty good track record.
Until then, Out of the Park has uses beyond just serving as a fun way to pass the time.

“We’ve had scouts get in touch with us and say that they like to use the game almost as an additional tool,” says Grisham, “because we have all the real players in it.”

Loyola University professor Zach Binkley uses the game for his Sports Analytics class. Students run thousands of simulations and present their findings as they learn to bridge the tech divide and make data-driven decisions.

And in this time of social distancing, Out of the Park, like many games allows for online leagues with friends or strangers.
“We certainly feel that, in at least a small way, Out of the Park Baseball 21 is helping die-hard fans get a little bit of their baseball fix,” says Grisham. “It’s no substitute for the real thing, but at least it’s a little something, especially for people who really don’t have a whole lot of ability to get out and go do the things they would normally do.”

So what happened in my test simulation?

-- Both the Cubs and White Sox lost on Opening Day.

-- Yoan Moncada and Dylan Cease of the White Sox and both Jon Lester and Kyle Hendricks of the Cubs battled nagging injuries for most of the season.

-- The Cubs finished 73-89 and lost Yu Darvish late to a finger injury.

-- The White Sox only won 76 games, with Luis Robert hitting 21 home runs but striking out more than 200 times.

-- Even though the Dodgers won a record 117 games, the Twins won the World Series in a four-game sweep over Washington.

There’s always next year.  Or — hopefully soon — the real thing.

Rick Gregg is a sports anchor and reporter for WBBM Newsradio in Chicago. He's on Twitter here: @RickGregg.