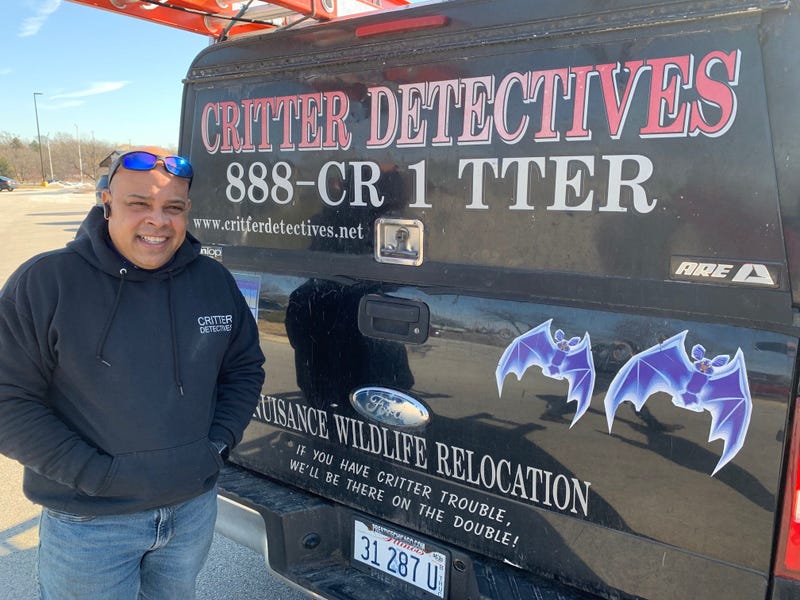 CHICAGO (WBBM NEWSRADIO) -- “I trap, probably, 5,000 to 6,000 animals per year,” said Lou Ocasio, owner of Critter Detectives which gets rid of nuisance animals so you don’t hear the pitter-patter of little feet in your attic.

Critter Detectives started more than 25 years ago by Ocasio’s parents as a side venture, at first.

“My parents are avid hunters, so they like to hunt. They had a farm in Missouri, so they would hunt and this was like hunting in the off-season to them," he said.

The day WBBM Newsradio's Bernie Tafoya caught up with Ocasio, he had already removed a dead squirrel from a chimney.

“The lady thought she had a live animal in her chimney. When I got there, ended up being a dead squirrel in her chimney, so we removed it. We’ll order chimney caps to install to prevent it from happening in the future," Ocasio said.

He said “90 percent of our stuff is normal trapping, but we do occasionally get those weird calls where someone says there’s a dog barking in their basement and we’re thinking that the lady’s crazy. We get out there and hear it and ended up being a fox in a wall.”

“We set live traps. Obviously, if there’s a raccoon in your attic, then we set a live trap for that situation and then we monitor everything, get the animals out. At this point and time in the year, it’s mating season, so there’s an average of one to three raccoons that we’re extracting from an attic.”

Ocasio said Critter Detectives services most of the Chicago area from the North Shore to Northwest Indiana and Joliet to Lake Zurich.