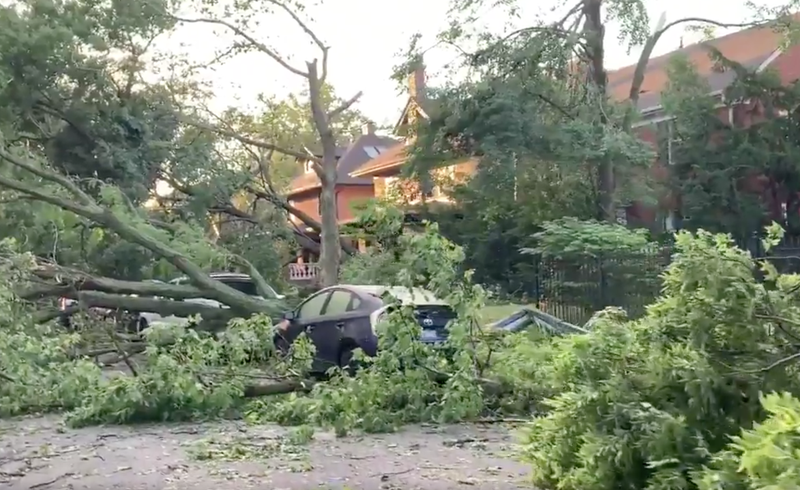 CHICAGO (WBBM NEWSRADIO) -- Tens of thousands of homes and businesses remain without electricity after severe storms ripped through the Chicago area Monday night, including one confirmed tornado that touched down on the North Side.

Despite damage coverage/intensity, no fatalities reported & few injuries thus far. This speaks to preparedness & communication by our partners in public safety & the weather enterprise, and sharing info & responding by you the public! Safety: https://t.co/5aOwaxfxPE #ILwx #INwx

The NWS confirmed a tornado touched down in Rogers Park and moved over Lake Michigan, becoming a waterspout. A video circulating on social media showed debris flying in the air in the North Side neighborhood.

We received this video from the Rogers Park section of #Chicago, of debris being lifted. There was a tornado warning in effect for the north side of the city. If you have any instances of significant damage from Rogers Park & nearby, please tweet them to us. Thanks. #ilwx https://t.co/nq3vstjEnW

"It was a wild ride," said Ellen Pinkham who lives in the 1700 block of West Jarvis Avenue in Rogers Park.

The tornado primarily took a bite out of trees on Jarvis Avenue east of Clark Street. For a couple blocks, mature, large trees were uprooted when the tornado hit. Downed trees and branches blocked Jarvis east of Paulina all night.

Rogers Park resident Amy Kamara said she and others were scared.

"Before sunset last night, all the neighbors came out and cleaned up that intersection down there. My husband was out helping them cut branches off things that had fallen down and get them out of the street," she said.

"It's amazing. When I heard the tornadoes were coming this way, I went out on the porch and said, well yeah I've heard this before, and when I got on the porch, I saw the sky get black and I saw the stuff flying in the air from the roofs, went downstairs," he said.

Waters said it was the first time he has ever had to go into the basement during a storm since he has lived in the city.

Alderwoman Maria Hadden, 49th Ward, said "it's all hands on deck for the city as we try to manage the aftermath of this storm."

City crews were out early Tuesday to begin cleanup of all the tree damage.

Pinkum, meanwhile, looks back on what happened and exclaims, "Wow, my first Chicago tornado."

ComEd said its crews are working to restore electricity to tens of thousands of homes and businesses that are still without power. The company said it could be days before many of them have electricity restored.