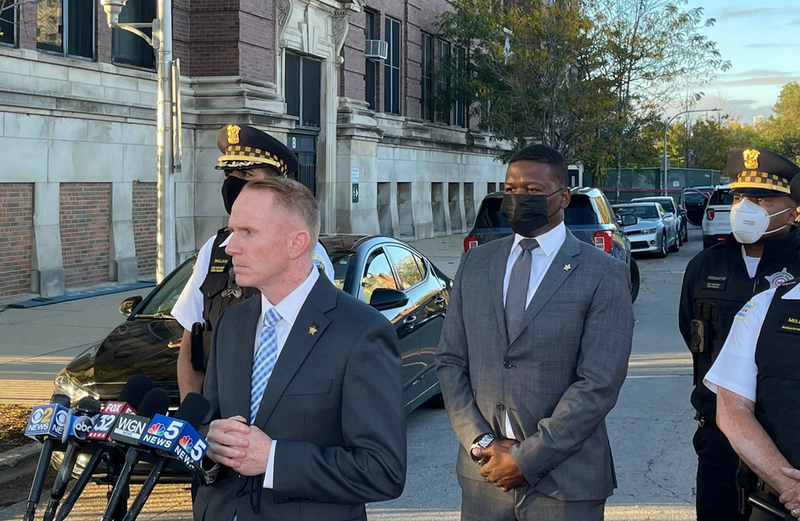 (WBBM NEWSRADIO) —A 14-year-old girl and a security guard were seriously wounded when a gunman standing outside a high school in Bronzeville opened fire as the guard was opening a door to let students out.

The girl and the 45-year-old man were shot around 3:20 p.m. outside Wendell Phillips Academy High School in the 3800 block of South Giles, according to a statement from Chicago police.

The girl was shot three times in the abdomen and taken to Comer Children’s Hospital in critical condition, according to police. The man, shot at least six times, was taken to the University of Chicago Medical Center in fair condition.

Chief of Detectives Brendan Deenihan said the guard had just opened one of the doors when he was hit. The girl apparently had just walked out of the doorway.

“The security guard opened up a door and immediately there was an offender in the street area who started shooting in the security guard’s direction,” Deenihan told reporters outside the school.

“The door opens and the guy immediately starts shooting, we do not know if it’s targeted or not,” he said. “The offender fled on foot and may have gotten into a vehicle.”

Students said the doorway where the girl and guard were shot is a popular exit for students heading home. Students were sent back into the school and told to wait for a family member to pick them up. Parents ran under police tape to reach their kids.

As of 4:30 p.m., Marrissa Martin still had not been able to find her daughter. “I’m still looking for her, she didn’t call my phone or nothing. I don’t know if she was scared and went to her friend’s house and her phone died.”

Martin is an alum of the school and said she has never heard of anything like this happening to students or staff on campus.

Michelline Joseph came to pick up her senior son and was shocked to learn what happened.