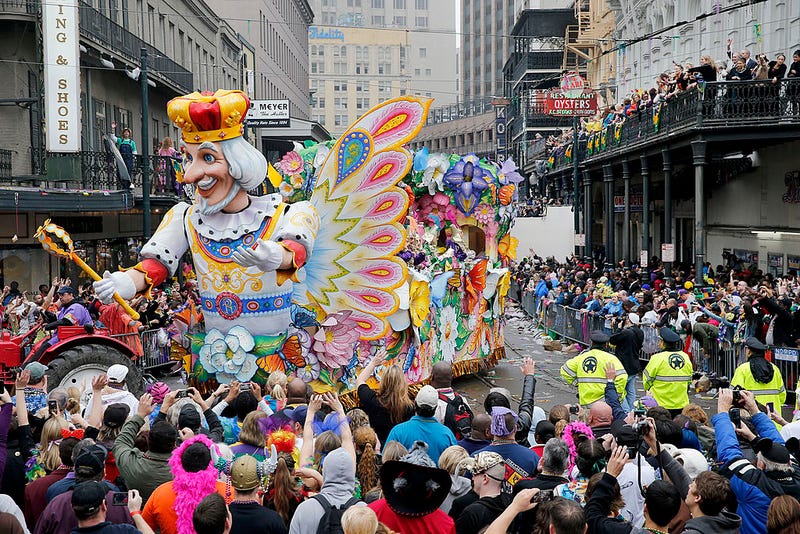 A float in the Rex parade turns on to Canal Street to large crowds with out outstretched arms on Mardi Gras Day. New Orleans prevented a parade from going down the street this week due to police staffing issues. (Photo by Rusty Costanza/Getty Images) Photo credit Getty Images
By Lauren Barry

Those planning on watching the Krewe of BOO! Halloween parade in New Orleans today (Saturday) might have to find new spots, as the route was cut short due to a lack of police officers.

According to Nola.com, the portion of the parade on Canal Street has been cut off and a City Hall spokesperson said it was because there were not enough officers to oversee it.

Brian Kern, captain of the krewe, said he could tell over the past few days that there would not enough officers to staff the parade. In previous years, the krewe has hired many officers to make sure attendees are safe. This year, he is disappointed.

“This needs to be resolved before Carnival,” Kern said.

Days before the parade was shortened, Mayor LaToya Cantrell said her administration may consolidate the routes of all 2022 Carnival parades due to staffing shortages.

"In order for us to have large-scale events in the City of New Orleans, we have to make sure that we can protect all of our residents as well as our visitors," said the mayor, according to WWL TV. Routes could be restricted to Napoleon and Saint Charles Avenue, said the outlet.

When the Krewe of BOO! rolls down New Orleans’ streets, it will end an 18-month dry spell for float parades in the city due to the COVID-19 pandemic. It is expected to function as test run for the upcoming 2022 Mardi Gras season.

Posted by Krewe of Boo on <a href="h