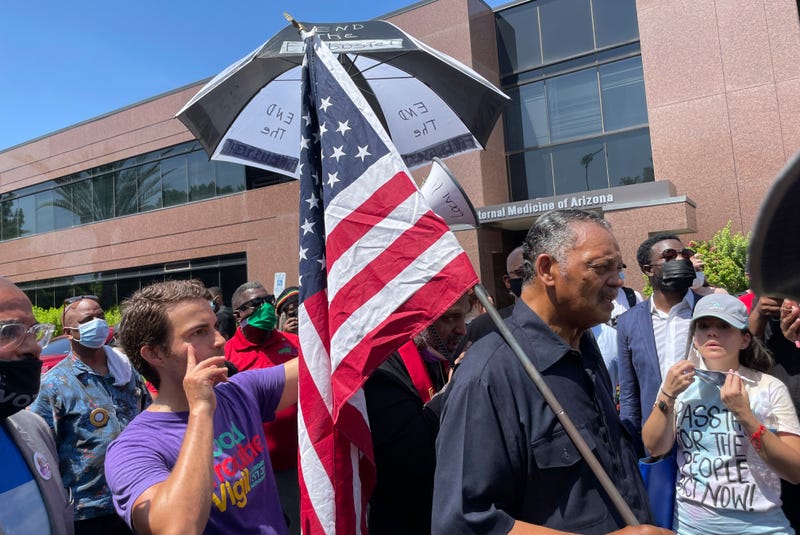 PHOENIX (AP) — Civil rights leaders, including the Revs. Jesse Jackson and William Barber, were among 39 people arrested Monday after refusing to leave the Phoenix office of Democratic U.S. Sen. Kyrsten Sinema, who has faced unrelenting pressure from liberal activists over her opposition to ending the filibuster to pass voting rights legislation.

Jackson, one of the nation's most prominent civil rights leaders, said the U.S. is in a “civilization crisis” with “battle lines drawn," and he urged activists to fight nonviolently for their rights.

“The power’s in you, the people,” Jackson said.

Passing voting rights legislation is a top priority for congressional Democrats and progressive activists, who say it’s essential to push back against state-level efforts by Republicans to impose new restrictions on voting. It's been stymied by the filibuster, which prevents Democrats from passing most legislation without Republican support.

Sinema is among moderate Democratic senators who have ruled out changes to the filibuster, which she says encourages bipartisan cooperation and more lasting legislative compromises.

Several hundred activists marched about a mile from a park to Sinema’s office in Phoenix’s Biltmore neighborhood, chanting “end the filibuster now.” Eliminating the filibuster would open the door for Democratic senators to enact voting rights bills and raise the federal minimum wage to $15, they said.

“I taught kids for 25 years that this is what you have to do to change things, and now it’s time to step up,” Barry Smith, a 59-year-old retired schoolteacher from Phoenix, said through tears as he sat outside Sinema’s office preparing to be arrested. “We’re supposed to be a democracy, so having a minority running the Senate is just so infuriating.”

Barber, co-chairman of the Poor People’s Campaign, said Sinema’s opposition to changing the filibuster is imperiling not only voting rights legislation but minimum wage, immigration and climate measures.

Those who were arrested were cited for trespassing and released, Phoenix police Sgt. Mercedes Fortune said.

Sinema supports the voting rights legislation, but critics say her support is hollow if she stands in the way of procedural changes that would actually allow it to be enacted. She's teamed up with Republican Sen. Mitt Romney of Utah for legislation to raise the minimum wage, but any proposal they develop is unlikely to be as high as the $15 sought by many in the labor movement.

“The filibuster compels moderation and helps protect the country from wild swings between opposing policy poles,” she wrote in the Washington Post last month in the most extensive explanation of her views she has given so far.