PHILADELPHIA (KYW Newsradio) — A retired Chester firefighter is in federal custody for allegations surrounding his involvement in the Jan. 6 riot at the U.S. Capitol.

According to federal charging documents, 55-year-old Robert Sanford is seen in a video throwing a fire extinguisher at several Capitol police officers. The fire extinguisher hit three officers in the head. Two of the officers were wearing a helmet; one was not.

A federal judge sided with the government Thursday afternoon, saying Sanford is a danger to the community and democracy because of his alleged involvement in the violent breach of the Capitol’s perimeter.

The judge ordered Sanford to remain in federal custody as his case moves to Washington, D.C.

Sanford’s lawyer said he has been cooperative; he turned himself in, as arranged. The lawyer argued for his release, noting the retired Chester Fire Department firefighter and father of three has never in trouble before. And, his lawyer said, he did not go to Washington, D.C., with violent intent.

His lawyer also said Sanford is not a part of any extremist groups. But when prosecutors executed a search warrant at his Delaware County home, they say they found Proud Boys paraphernalia.

In response, Sanford shook his head vigorously and made a face of disbelief.

Federal officials released images of the person they believe threw the fire extinguisher, saying they got a tip from someone identifying him as Sanford. That person told officials that Sanford said he took a bus trip to Washington, D.C., to see President Donald Trump’s speech, then followed the president's instructions and went to the Capitol.

According to the tip, federal officials say, Sanford claimed he was in the area around the Capitol for about 10 minutes before leaving, but he did not mention throwing anything. 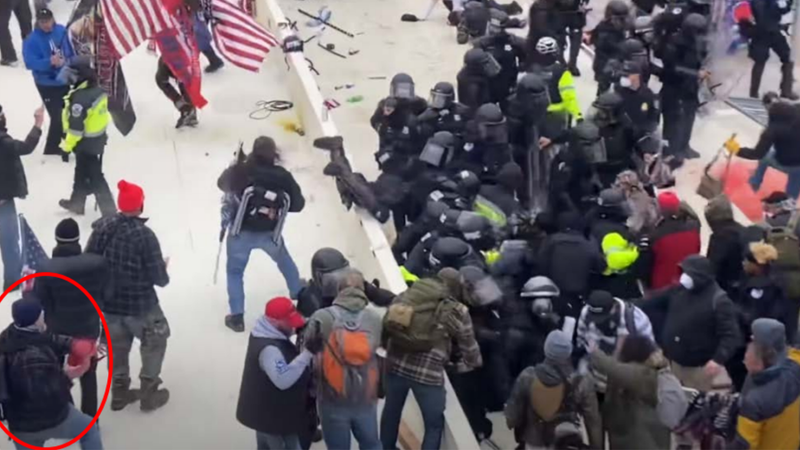 A person, alleged to be Robert Sanford, is seen on video throwing a fire extinguisher into a group of police officers during the riots at the Capitol on Jan. 6, 2021. Photo credit U.S. Department of Justice 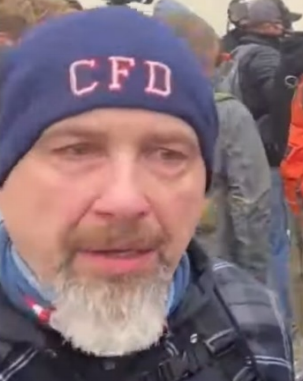 DOJ investigators say Robert Sanford (above) matches the person seen throwing a fire extinguisher into a crowd of police officers during the riots at the Capitol on Jan. 6, 2021. Photo credit U.S. Department of Justice

"While Robert Sanford adorned a hat with a fire department logo, he is not a current employee of the city of Chester," the city's mayor, Thaddeus Kirkland, said in an official statement issued Thursday morning.

"If any person, be it current or former employee or resident, is confirmed to have participated in last week’s event at the Capitol, then we hope our legal system will work according to its purpose and bring them to justice."

He affirmed Sanford's First Amendment rights to freedom of speech and assembly, but said "the actions of the rioters in D.C. last week hinged on characteristics of domestic terrorism."

Officials say this is not connected to Capitol Police Officer Brian Sicknick, who, officials have said, died from injuries sustained when he was hit in the head with a fire extinguisher.

Kirkland said Sanford was in the Chester Fire Department from January 1994 to February 2020.