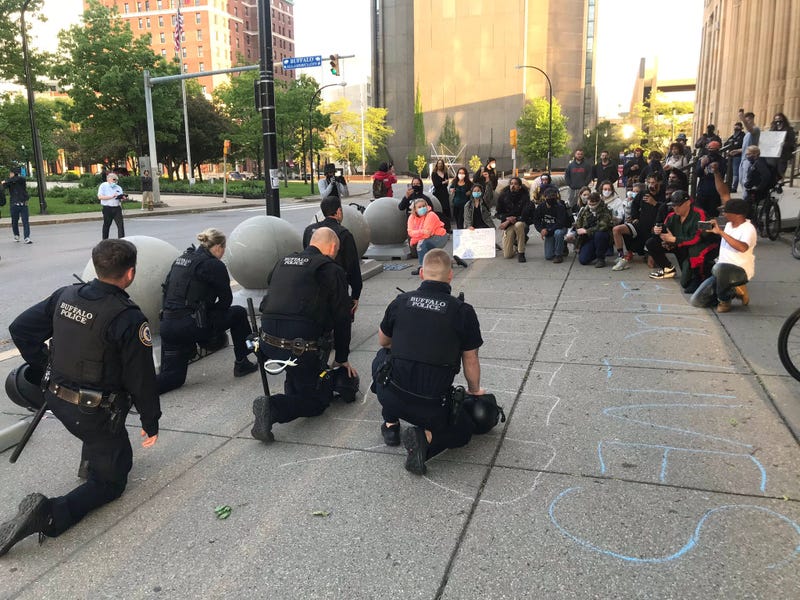 Buffalo, N.Y. (WBEN) - In what appears to be a shift in the tone of the ongoing demonstrations happening in Buffalo in the wake of the death of George Floyd in Minneapolis, protesters and Buffalo Police officers united as the curfew took hold in Niagara Square Wednesday evening, took to their knees and shared a moment of silence.

It was a contrast to how the day ended Tuesday when a handful of demonstrators were persistent and were persuaded to leave by a united force of riot-clad officers in a line as they swept the demonstrators away from the square.

"It's about all lives, it's about all of us as a people," said 'Juan' as he joined with police at the end of the day and told them "that's all we wanted all day long."  "Not all police officers are at fault for this tragic situation," Juan said after he knelt down with the handful of patrol officers and even offered them some of the pizza they were sharing on the steps of city hall.

Is the tide turning?  Are demonstrators getting their message through and accepting that police and community leaders appear willing to listen to their calls for change?

Only time will tell.

As the curfew approached, a group of demonstrators could be seen in front of city hall having a dialogue on the current state of affairs, their cocnerns and hopes for changes in how law enforcement handles situations like the tragic and deadly one in Minneapolis.

Buffalo Police hierarchy as well as Buffalo Mayor Byron Brown have agreed to meet with community leaders in the coming days for formal discussions.