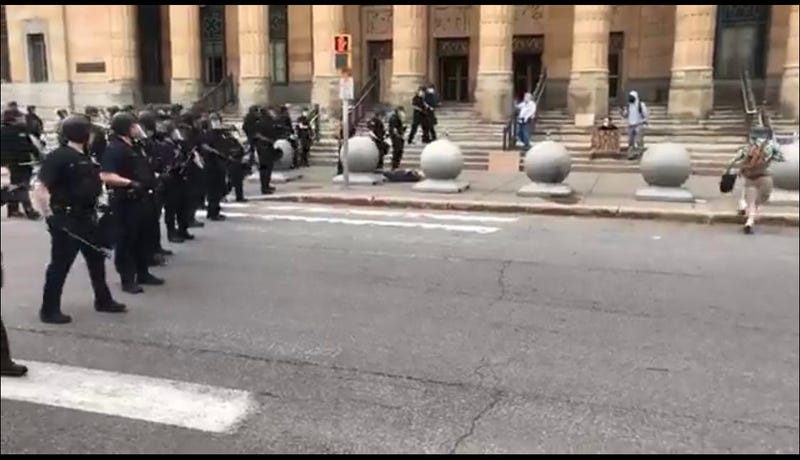 Buffalo, NY (WBEN) - The City of Buffalo now dealing with the fallout from an incident where police officers shoved a 75 year old man to the ground, seriously injuring him.

Graphic video of the incident shows the man slamming to the ground and bleeding from his head. The impact is heard clearly in multiple videos.

In an initial statement, Police said that the man “tripped and fell” after a skirmish with police. Later Thursday evening, Police Commissioner Byron Lockwood said that two officers were suspended after reviewing the video, which shows the man being shoved to the ground and then walked past by officers.

“There is no attempt to mislead,” said Buffalo Mayor Byron Brown about the police statement.

“We always have to present information with the highest level of transparency and honesty for public trust.”

“There was no risk to anybody at that point,” said David Rivera, Chair of the Common Council’s Police Oversight Committee about the incident. “If I had did that I would be charged with assault.”

Rivera is concerned by the Police Department’s initial statement, which he said creates distrust with Buffalo police.

“There’s an inherent conflict of interest right there… your first instinct is to represent the interest of the Department,” Rivera said. “They should have waited, they should have looked at the videos… It does bring a lack of confidence in the general public when you make a comment like that.”

Why, then, did police say the man tripped, when video shows that was not the case?

“How the situation was being observed, it was being observed from a camera that was mounted behind the line of officers,” said Buffalo Police Captain Jeff Rinaldo. “The initial information, it appears the subject had tripped and fallen while the officers were advancing.”

“Shortly thereafter, the department was made aware of another video from WBFO that clearly showed the officer’s arm going out and that he shoved the individual with another officer.”

Rinaldo said that as soon as Police Commissioner Byron Lockwood saw that video, he suspended the two officers without pay.

“I think the department was extremely quick to correct what was put out once it was discovered that it was not accurate,” Rinaldo said.

Both Rinaldo and Mayor Brown said they are concerned that the incident and statement that followed could undo the good will that the department has built with the community over the past week.