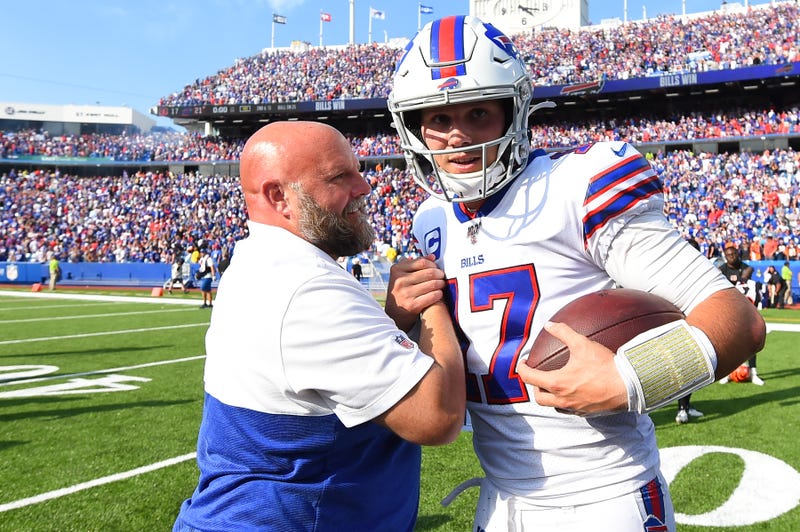 ORCHARD PARK, N.Y. (WBEN/AP-John Wawrow) — Bills quarterback Josh Allen was an impressionable rookie in 2018 still trying to figure out what made Brian Daboll tick when Buffalo’s first-year offensive coordinator shared a story of how he quit chewing tobacco.

It came down to Daboll winning a bet with members of a former team’s coaching staff that he could stop cold turkey.

In many ways, Allen realized, he’s no different than Daboll.

“He’s very, very competitive, as am I,” Allen said, noting Daboll will bet the quarterback milkshakes to see if he can hit a target in practice.

“He’s constantly in a competitive mood. That’s how I relate to everything,” he added. “There’s always got to be a winner and a loser in my opinion, and he’s kind of the same way.”

Off to a 3-0 start in preparing to play at the Raiders (2-1) on Sunday, the Bills are winning more than losing two years later.

Allen and Daboll are overseeing an offensive renaissance in which the suddenly pass-happy Bills are among the NFL’s most high-scoring teams three weeks into the season.

Allen’s 1,038 yards passing rank second in the NFL, and are the most by a Bills player through three weeks of a season. He’s also the NFL’s first player ever to have at least 10 touchdowns passing and two rushing through Week 3 of a season.

And thus far, Allen’s put to rest questions about his accuracy. After ranking last among 32 starters in completion rate in each of his first two seasons, Allen has completed 71.1% of his attempts, which currently ranks seventh.

Though Allen has benefitted from the offseason addition of receiver Stefon Diggs, Daboll deserves credit for devising an offensive approach to suit Allen’s strong-armed and mobile abilities.

In a departure from the previous two years, the Bills have often used three- and four-receiver formations, making it easier for Allen to find the open man because defenses can’t double-cover everyone.

Daboll, who grew up in suburban Buffalo, played down the offensive success by noting it’s still early. And don’t ask him if he’s getting any enjoyment from watching Allen join Hall of Famer Jim Kelly in becoming Buffalo’s second player to top 300 yards passing in three consecutive games.

“It’s only fun if you win,” Daboll said.

Daboll’s words of caution are hardly unique among NFL coaches, who are always moving on to focus on the next game. And it’s no surprise coming from Daboll, given he spent 11 seasons as an assistant in New England under Bill Belichick, who is famous for deflecting praise.

He lasted two seasons in Cleveland, where the Browns finished near the bottom in yards gained and points. It was hardly different during his one-year stops in Miami and Kansas City.

Daboll’s breakthrough came when he spent the 2017 season as offensive coordinator of Alabama’s national championship team, which is when the Bills came calling.

Upon firing coordinator Rick Dennison after just one season, coach Sean McDermott turned to Daboll. The two first crossed paths in 1997 at William and Mary, where McDermott played safety, and Daboll broke in as a coach.

“One of the cool pieces about his background was having been around a number of successful years in New England,” McDermott said, before noting Daboll’s season at Alabama. “For him to take his craft to the college level and really expand his awareness of offensive football and some of the trends at that level, I thought that was another feather in his cap.”

Daboll’s ability to relate to the modern college game was important to help groom the quarterback the Bills were preparing to draft, which turned out to be Allen, who was selected seventh overall out of Wyoming.

From the outset, Daboll has been Allen’s biggest supporter. In deflecting questions regarding Allen’s inconsistencies, Daboll noted how hard Allen worked on improving his mechanics and becoming more patient in the pocket.

“He’s made huge improvement since he’s been here,” Daboll said. “He’s a competitor. He’s been like that since we met with him out in Wyoming. You got the sense of what kind of person he was. Competitor. He’s a fun guy to coach.”

The feelings are mutual, with Allen saying, “It’s been a pleasure to play for (Daboll).”

As for who has the edge on the milkshake bets, Allen broke into a smile, saying: “I’d say it’s probably 50-50.”