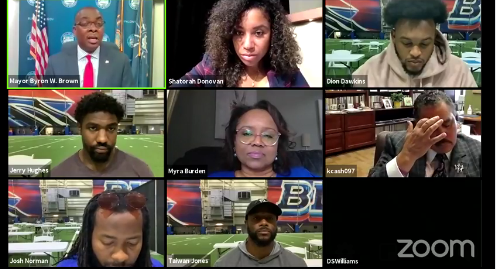 With the district starting the school year with a completely remote model of education, the gaps in technology and internet access became a huge issue to tackle.

“I am appreciative that the Buffalo Bills 2020 team, and Terry and Kim Pegula, have chosen to help our community in such a practical and effective way,” said Brown. “Through the fun with contributions from the players, staff and ownership, they will offset the Buffalo Public Schools’ cost of providing internet access to 4,550 households that currently do not have internet of children that attend Buffalo Public Schools.”

Cash thanked the players and the organization, saying this will go a long way in helping to provide a quality education for the city’s youth.

In addition to the internet access initiative, players will apparently work with the mayor’s office to help promote the importance of completing the census, police reform, and to educate residents about voting options.

“We noticed that there was a vast majority of kids in the City of Buffalo who did not have internet, and to be going through corona, and you need internet for schooling, we felt like education was a key piece, not only to police reform, but also a good key ingredient to help spread that knowledge throughout the community,” said Bills Defensive End Jerry Hughes. “We felt like the more that we can inform the community to get them educated on what to know as far as what’s important for them, we could continue to move further and further down the line.”

As of now, the exact total of the donation from Bills ownership and players is unknown, but Madison Carter of WKBW reports that the digital divide need is nearly $1 million.